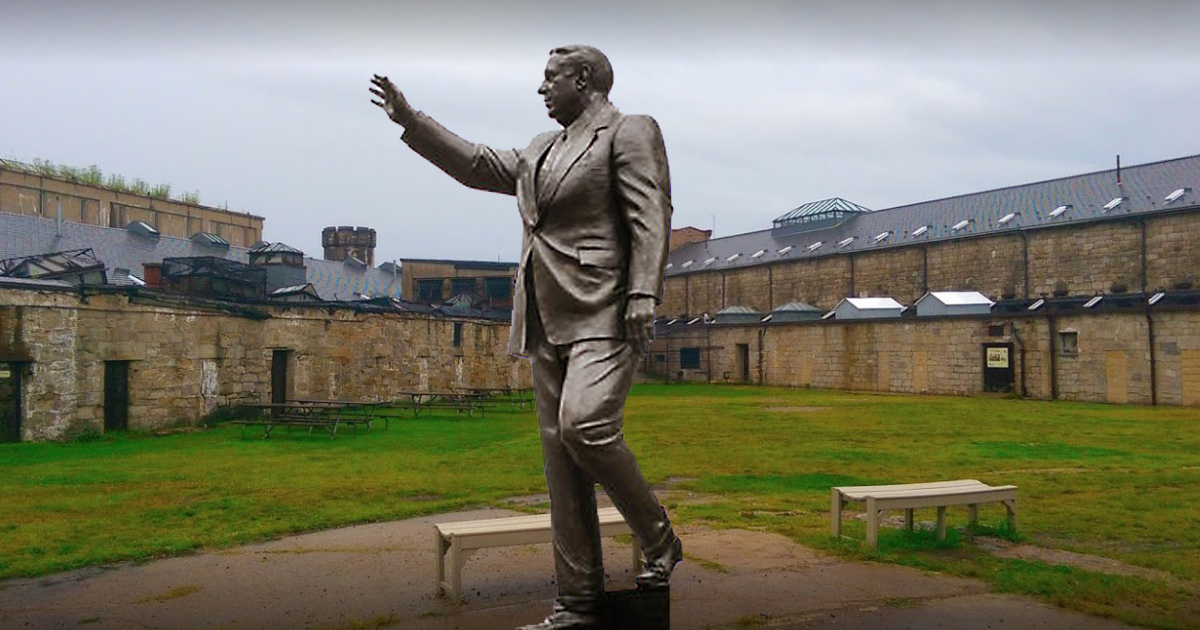 The Friday arrest of a Germantown man for defacing the bronze statue of former Mayor Frank Rizzo in front of the Municipal Services Building marked the end of a tumultuous week for the controversial statue.

Police arrested Wali Rahmen, a 40-year-old African-American for scrawling "Black power" on the bronze statue, charging him with criminal mischief, institutional vandalism, and desecrating objects. All of the charges are misdemeanors.

The statue of the former police chief, who served as mayor of the city from 1972 until 1980, has been a source of controversy since it was unveiled back in 1998.

Citing Rizzo's well-documented history of strong-armed tactics as the police chief and the perception that he was perceived to be a racist, cries for the removal of the statue have grown louder in the aftermath of last week's protest by white supremacists in Charlottesville, Va., over the removal of the statue of Confederate General Robert E. Lee.

On Friday, 81-year-old Barbara Willis, an African-American woman in West Philadelphia who worked in city government for more than 40 years beginning in 1956, said that Rizzo – whom she referred to by one of his nicknames, the "Cisco Kid – said Rizzo "was the best mayor I have ever worked for. And he was better than the mayor who dropped the bomb on those black people in West Philadelphia."

Willis was referring to Goode, the city's first African-American Mayor who served two terms. Goode, who defeated Rizzo in the the 1983 Democratic primary and again in the 1987 general election, was in his first term as mayor in 1994 when the Move compound in West Philadelphia was bombed, resulting in the deaths of 11 people, five of them children.

Under Rizzo, a 1978 police assault on the group's Powelton Village compound resulted in the death of a police officer and the savage, televised beating by police of Move member John Africa. That image went worldwide.

Goode on Friday said Rizzo "appealed to people who were basic racists; people who saw Frank Rizzo as their protection from Black people." Goode went on to compare Rizzo to President Donald Trump, who came under fire for speaking almost dismissively of the white nationalist actions in Virginia, which resulted in the death of Heather Heyer, a woman killed while protesting against the march.

Earlier this week, City Councilwoman Helen Gym tweeted that the Rizzo statue should be removed.

Republican candidate for District Attorney Beth Grossman, citing what she said was an effort by Gym to fuel "a political side show," and that Gym should be focused on lowering the homicide rate in the city and dealing with the opioid crisis that is ravaging the white community."

Shortly after Grossman issued her rebuke of Gym, the Green Party of Philadelphia went right back at the beleaguered Rizzo statue.

"I lived through the Rizzo calamity and participated in the 'STOP Rizzo' movement to prevent him from changing the City Charter," said Chris Robinson, membership secretary for the Green Party of Philadelphia. "Now some suggest moving his statue to a more appropriate place, and I believe that it would be appropriate to locate it in the courtyard of Eastern State Penitentiary."