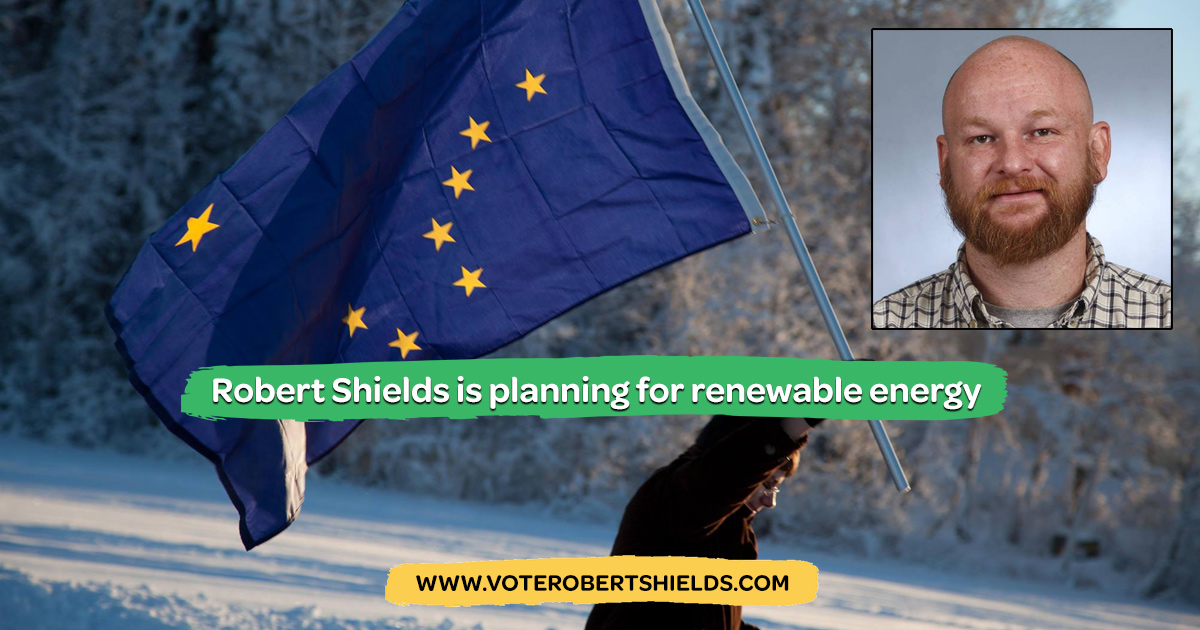 FAIRBANKS, AK — Robert Shields says the Fairbanks North Star Borough is ignoring opportunities to capture renewable energy, such as solar power and gas from rotting trash, that could save taxpayers tens of millions of dollars.

Boosting renewable energy is part of his plan to make Fairbanks a global center for culture and commerce if he is elected borough mayor on Tuesday. Shields said he would start by putting solar panels on every municipal building, including schools.

"There are four names on the ballot, but there are only two choices: Continue to do as we have while expecting different results, or vote for change," the 43-year-old renewable energy promoter said. "What is needed right now is a new perspective."

Shields has been endorsed by the Green Party of Alaska and the Money Free Party U.S.A., which advocates for a new social order "away from a society based on increasing consumerism, infinite economic growth and aggressive global competition, towards a society based on sustainability, equity and global cooperation," according to the party's website.

Shields ran for borough mayor in 2015, winning 327 votes, or nearly 2 percent of the total. He ran for Borough Assembly last year, winning 2,077 votes, or 11.5 percent of the vote. Shields also submitted his name to serve on the borough Recycling Commission, now the Sustainability Commission, with no success.

The former grocery store baker who described his current line of work as a small business consultant is running his campaign on about $1,500 worth of cash and in-kind donations, according to the latest filings with the Alaska Public Offices Commission. The Green Party of Alaska gave $250, his largest cash contribution.

What Shields lacks in political experience and financial backing he makes up for with big ideas such as turning the Polaris Building into a vertical farm or creating a new industry in Fairbanks by taking recycled materials and turning them into industrial materials that could be used in local industry. He also wants to explore making the Riverboat Nenana, a retired historical showpiece at Pioneer Park, river-worthy again for taking people on day trips. Perhaps the vessel could be turned into a casino, he said.

He proposes using leveraging to finance these projects. For example, he said, solar panels could be paid for with money saved on energy costs.

Shields, who said he is studying economics at the University of Alaska Fairbanks, is the founder of the Alliance for Reason and Knowledge, which he said has about 300 members. When asked for a list of members, he referred to the alliance's Facebook page, which shows that 161 people follow the page.

Shields has called Fairbanks home on and off for about 30 years. His extended family is primarily in Washington state, he said in an email.

He lives humbly, he said, and spends most of his time helping people and promoting causes he holds dear. On Sunday, he helped a friend secure a tarp on a leaking roof. He also helps organize an annual tour of local homes and facilities using solar energy.

As a business consultant, Shields said he has helped a local dog groomer grow and has performed "limited scopes of work" for the rural Alaska villages of Chuathbaluk and Ruby.

"I am working with a client in Ontario, Canada, on business for designer space suits," he wrote in an email.

Shields writes for a local alternative paper known as Free the People AK, edited by a property tax protester.

He thinks the borough could be less reliant on property taxes by better marketing its services in order to increase revenue through user fees.

Shields said he wants to stop the practice of the borough foreclosing on property for nonpayment of property taxes.

"I think there are better ways to fund the government," he said. "I don't think anyone should have to worry about losing their home."

When asked if he is proposing a voluntary property tax system, Shields said no but added, "There are already people willing to pay taxes because they recognize the value of the services the borough offers. It is not the threat of foreclosure that motivates them."

What is your plan for dealing with aging public infrastructure such as the Mary Siah Recreation Center and the Riverboat Nenana and how do you plan to vote on the upcoming bond measure?

Shields: "After a decade of poor decision-making by experienced community leaders, we can't just look at these as deferred maintenance issues. My approach would be to see them as assets to invest in. For example, the riverboat is a part of Fairbanks history and a core part of the tourist experience. I would look at ways to enhance those values to build a profitable business around. My vote is no."

What should the borough do about smoke pollution? And how do you plan to vote on the ballot measure prohibiting the municipality from regulating home heating?

Shields: "I am tired of seeing the good Citizens for Clean Air beat their fists against a willfully ignorant borough unwilling to challenge the coal industry for control of the future of this community. For 75 years, we have been told coal is cheap and clean by cherry-picking facts that support a predetermined narrative. Opportunities abound for those willing to leap forward. My vote is yes."

The next mayor will deal with contracts for the borough's three employee bargaining groups. What will your approach be to address the union contracts?

Shields: "I play the long game, and that requires short-term sacrifices. Until we have our house in order, I would support a hiring and spending freeze. I would need to look at each contract in detail to determine how to proceed, but my focus is on new revenue from untapped sources, money left on the table and thrown in the trash. Health and child care are issues for all citizens."

State regulations allowing marijuana consumption at retail stores are out for public comment. Do you think the borough should allow on-site consumption? Why or why not?

Shields: "Cannabis can save the economy, fight drug addiction and heal the planet. I believe it's hypocrisy and discrimination that it's treated differently than tobacco or alcohol. I support responsible personal choice in all matters and have too much to focus on to be concerned with what's in the pipe of the person I just walked by on the street. This hypersensitivity to public consumption is the hangover from decades of reefer madness."

Should the borough hire more code enforcement officers to help deal with the backlog of complaints? Why or why not?

Shields: "I will not support a police state or the overwatch of Big Brother. When government attempts to regulate behavior, they rob individuals of the opportunity to be responsible and accountable for their actions. This is a plague on society, and the experts I would bring in would be mediators to teach us how to talk to one another again. Code review and updates would also be a focus after energy."

If elected, would you continue to have added security at area transfer sites? Why or why not?

Shields: "OMG No! In the third industrial revolution, we can turn our transfer stations into reclamation facilities that create local jobs and turns our trash into the treasures we need to build a new future for ourselves. There is so much waste in the way recycling is done that we are bleeding out the budget to keep central recycling afloat. At the same time increasing our dependence on imports."

Delinquent taxpayers are charged a penalty of up to 5 percent of the principal tax plus 8 percent per year in accrued interest. Is this an appropriate penalty? Why or why not?

Shields: "I have no problems with penalties and late fees but draw the line at foreclosure over nonpayment. The issue of allodial patent aside, landowners shoulder the burden of the cost of services and for their primary residence should never fear the loss of personal security, comfort or safety because of a borough desperate for cash. This is a fundamental issue of trust between the local government and the citizens we serve."

The largest annual appropriation by the borough is for public education. Is the local contribution to education too low, too high or just right? Explain.

Shields: "As revenue increases, the most important investment we can make is in education. I will actively advocate to see that our teachers are supported in their ongoing mission to inspire the next generation of critical thinkers. Aerospace can replace oil revenue, and I would ask Elon Musk to help develop STEM partnerships with industry. Expanding adult learning programs and using our isolation as an advantage to study peaceful space exploration."

Is the revenue cap good for the borough? Explain.

Shields: "Yes! Nowhere is diversity more of a strength than in nurturing healthy revenue streams. We have seen all too well what happens with over-dependence on one resource and failing to invest in maintaining a diversified portfolio. With an economics education and a professional background in business development, the perspective I bring to the borough is entrepreneurial innovation, which translates into new revenue and living-wage jobs without new taxes."