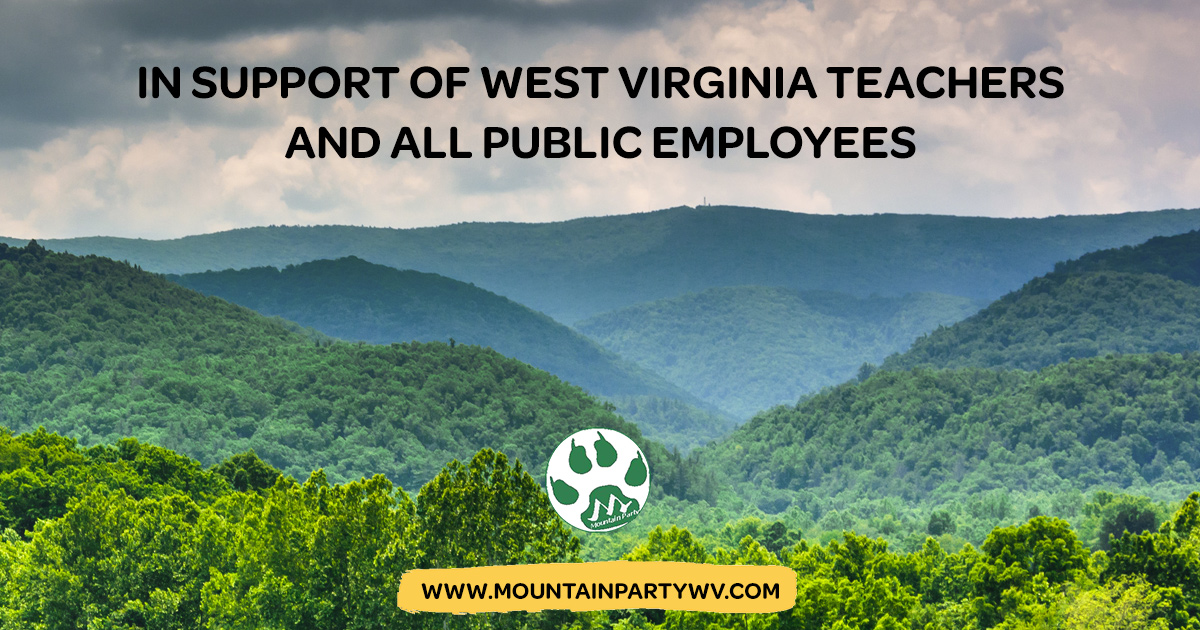 Solutions & Resolutions: FOR West Virginia Teachers and all Public Employees

On February 18, 2018, Mountain Party leaders passed a Resolution* supporting all teachers, school service personnel and public employees who are fed up with low pay and ever increasing health insurance costs. The Mountain Party further recognizes that these problems persisted even prior to the current GOP control of West Virginia’s statehouse and Executive branch.

Back in 2014, Mountain Party leaders passed a resolution supporting full collective bargaining rights for all Public Employees, including the right to strike. We found it necessary to do so because Statehouse Democratic leaders in the majority under Governors Tomblin and Manchin for too long had also neglected to properly pay teachers or fix ever-growing PEIA problems. Manchin did he did propose and get a small raise, but he froze all public employee wages before Earl Ray was elected governor.

But hey, come to think of it, if ANY past WV governor really respected public educators, he would have granted teachers the right-to-strike by Executive Order! And even if current state lawmakers manage to pass an acceptable pay raise this year, the same problems will continue to persist. That’s because the leaders of both current “ruling” Parties in West Virginia will NEVER pass right-to strike legislation just like they NEVER tax major corporations in accordance with what they extract from the State.

Instead, BOTH “D’s” and “R’s” have historically balanced the State budget by unfairly squeezing our poor and working class through regressive taxes like our General Sales Tax scheme.

On December 22, 2017, President Trump signed the Tax Cuts and Jobs Act, which basically cut the corporate tax rate from 35 percent to 21 percent. In 2016 WV lawmakers had already cut severance taxes on coal by $50 million a year. This session, WV lawmakers are now considering the elimination of corporate business and inventory taxes, as proposed by a Governor who stands to personally gain millions through his many coal operations here.

Mountain Party leaders believe that to keep current and future lawmakers focused on meeting the needs of all of West Virginia’s struggling Public Employees, it is critical to find, and promote truly progressive candidates. Including those who will not only introduce, but push hard for legislation that will lawfully grant the right for all Public Educators the right to strike.

*WHEREAS the MOUNTAIN PARTY of WEST VIRGINIA, Affiliate of the Green Party of the United States, stands for economic justice for all Americans, including the right to bargain collectively for wages, benefits, working conditions, and the right to engage in peaceful job actions,

BE IT RESOLVED that the MOUNTAIN PARTY of WEST VIRGINIA stands in solidarity with the sisters and brothers of organized labor in West Virginia and the West Virginia AF of L-CIO representing teachers, service personnel, state employees, police, and emergency first responders in their calls to the West Virginia State Legislature to immediately send to the Governor bills providing for meaningful pay increases for these persons and a bills assuring the financial soundness and the promised coverages and indemnities of the West Virginia Public Employees Insurance Agency.

BE IT RESOLVED that the MOUNTAIN PARTY of WEST VIRGINIA stands in solidarity with all unions and crafts, and encourages these sisters and brothers of the affected professions to obtain the ends so described in this resolution.