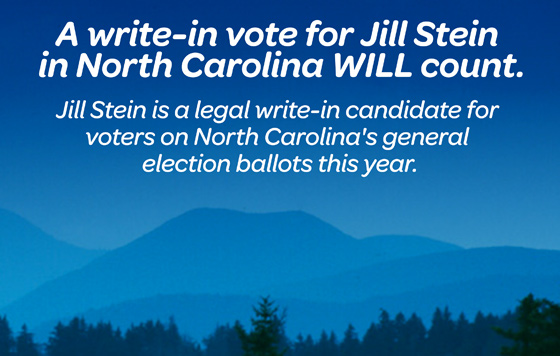 The North Carolina State Board of Elections has published a list of valid write-in candidates at is website here: www.ncsbe.gov/Elections/Election-Information. Jill Stein's name appears on that list.

In North Carolina, voters must write in the name "Jill Stein" for President (and nothing more) to ensure their vote for Stein is counted. There is no need for voters to identify the Green Party or the vice-presidential candidate, Ajamu Baraka, when writing in Jill Stein.

North Carolina ballot-access laws are some of the most stringent in the country. In order to have Jill Stein's name featured on the ballot in 2016, the North Carolina Green Party would have needed to submit about 90,000 petition signatures -- the equivalent of getting the entire population of the city of Asheville, NC, to sign -- by May 15th, long before most Americans turned their attention to the Presidential race.

If Jill Stein earns at least 2% of the vote this year in North Carolina, the Green Party stands to gain major-party standing in future election cycles, thereby eliminating the most onerous petition requirements. The Stein campaign is urging North Carolina voters to "invest their votes" in a write-in vote for Jill Stein, not merely with the goal of electing one candidate for President, but also to build a party that can compete under the same rules as the Democrat and Republican parties currently favored by the state's exclusionary ballot-access laws.