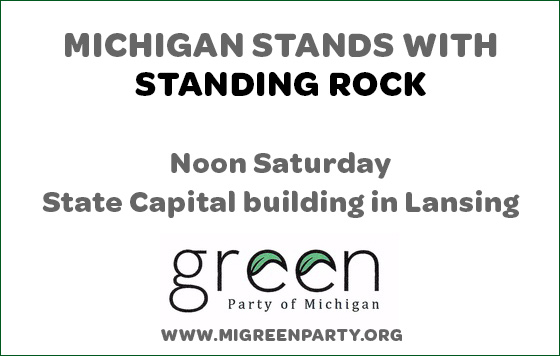 Jill Stein, the Green Party candidate for President of the United States has appeared on the site of the peaceful demonstrations at Standing Rock, North Dakota and garnered media attention when she spray-painted the words "I approve this message" on a bulldozer "that had been tagged with other messages of protest and that had been used to destroy sacred burial sites of the Standing Rock Sioux."

A large contingent of Michigan Stein supporters will join the upcoming event in Lansing. The group Anonymous plans a march to the Capitol, starting at 8:00 am, as a part of the "Million Masks March" nationwide action.

Tribal Leaders will speak at Michigan Stands With Standing Rock beginning at 12pm, with prayers and drumming to follow into the evening. This event will be of both national and State-wide interest.

A recent poll by Marketing Resource Group shows Stein with 11% support in the Lansing Area. That poll can be found here: http://mrgmi.com/2016/10/michigan-poll-trump-trails-clinton-by-five-percent/

What: An event to show solidarity with the Standing Rock Sioux Native Americans

Why: The Jill Stein campaign in Michigan is participating in this direct action on the East Steps and lawn of the Michigan Capitol Building to show solidarity with the Tribal Leaders who are acting to protect water and sacred grounds in North Dakota.