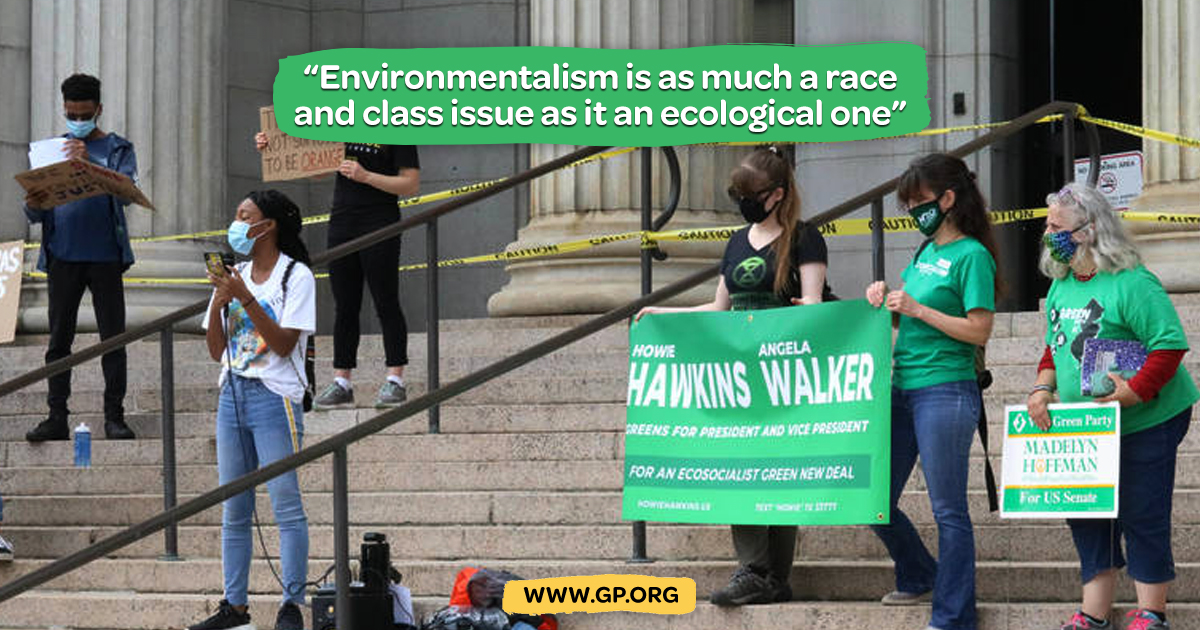 ELIZABETH, NJ – On Saturday September 26th, the Union County hub of the Sunrise Movement, in collaboration with the Young Ecosocialist Caucus of New Jersey and Cosecha NJ, held a demonstration for environmental justice - "the fair treatment and meaningful involvement of all people regardless of race, color, national origin, or income, with respect to the development, implementation, and enforcement of environmental laws, regulations, and policies" as defined by the US EPA - in Elizabeth.

The Rally started at approximately 12:30 PM right outside the Union County Courthouse and wrapped up at around 3:00. Activists and speakers led songs and chants, read a lengthy demands resolution signed by several local organizations, including the Newark Water Coalition, the Progressive Democrats of Union County, and the New Jersey Green Party, and took to the podium to tell personal stories and underscore the impact of environmental racism on Elizabeth residents and across New Jersey. The "Rally for Environmental Justice" was planned for the day after the September 25th International Day of Climate Action, after a coalition of youth climate organizations hosted a series of teach-ins about environmental racism in New York City. To give voice to the intersectionality of the climate crisis is an aim at the heart of the climate justice movement, but environmental injustice is often overlooked in the confluence of factors that drive the climate crisis.

The Sunrise Union County, YES Caucus and Cosecha organizers that led the event hoped to draw attention to the systems of oppression underlying the more observable effects of air, water and solid waste pollution.

Sunrise UC co-hub coordinator Daniella Rivera described the stark contrast in quality of life within Union County: "The truth is that there are two completely different realities going on within Union County. I grew up in Elizabeth, where I thought it was normal to see factories producing smoke into our air 24 hours a day, or that it was okay to not be able to drink from our school's water fountains due to the ongoing water crisis in Newark. I was fortunate enough to get accepted into a school like the Academy for Performing Arts, however the vast difference of the quality of life between myself and my peers shocked me. From a young age, Elizabeth schools would greet us with metal detectors and mandatory bag checks every single day, no matter what age or how the weather was. I remember saying this in Scotch Plains and everyone reacted as if I said something horrible, but to me it was completely normal. I rally in an effort to put an end to systemic racism in BIPOC communities."

YES Caucus Secretary Justin Roig's powerful speech was a testament to the specific nature environmental issues across New Jersey disproportionately affect low income communities. "In my county (Cumberland) the highest point of elevation is the dump, homes are being demolished because the state didn't bother to help after hurricane sandy," Roig says, "the fact that is is happening in the poorest county in the state is no coincidence, environmentalism is as much a race and class issue as it an ecological one."

The movement for environmental justice is not a new phenomenon. For decades, communities have led the environmental justice effort, and their advocacy is giving voice to the movement in the New Jersey government. Just weeks ago, the Cumulative Impacts Bill (S232) became law. Ten years in the making, Senator Troy Singleton's legislation received broad support from environmental justice groups across the state and local Elizabeth candidates as well as statewide senate candidates, who are actively dedicating themselves to the cause.

"Our leaders need to make any adjustments necessary to ensure that our laws, policies and budgets prioritize the health and well-being of these historically oppressed communities" Janice Figueroa, co-founder of The People's Committee of Elizabeth emphasized. She is running for election to the Elizabeth Board of Education to further that purpose.

This year marks 40 years of "struggle for environmental justice, to protect lower income communities from the dangers of toxic chemical pollution, unfortunately still just as relevant a problem today" for the New Jersey Green Party's candidate for Senate, Madelyn Hoffman, who pointed to the intersections of climate justice, extractive and exploitative environmental economics, and "imperialist wars overseas" driven by the fossil-fueled military-industrial complex. "[These communities] have been fighting this racism and injustice throughout history, but I'm encouraged to see that we're joining ages, genders, ethnicities, religions, to finally achieve the justice we deserve." Fiona Joseph, a youth leader at Make the Road NJ, spoke at the rally on behalf of the Cats of Eastwick. "Environmental racism is rooted in hundreds of years of inequity" she said; "the only way we can begin to reverse that is by uplifting communities here, organizing people in Elizabeth, because ultimately what we're doing with [this demonstration] is catching people's eyes."

The Rally for Environmental Justice demands resolution addresses steps local government should take to advance the environmental justice agenda in Elizabeth, Union County and New Jersey as a whole. Such steps include bringing an end to public sector corruption and increasing transparency in the political process and the permitting process for polluting facilities. The resolution also includes demands for investment in burdened communities to secure COVID-19 relief, provide universal clean drinking water, and build climate resilience.