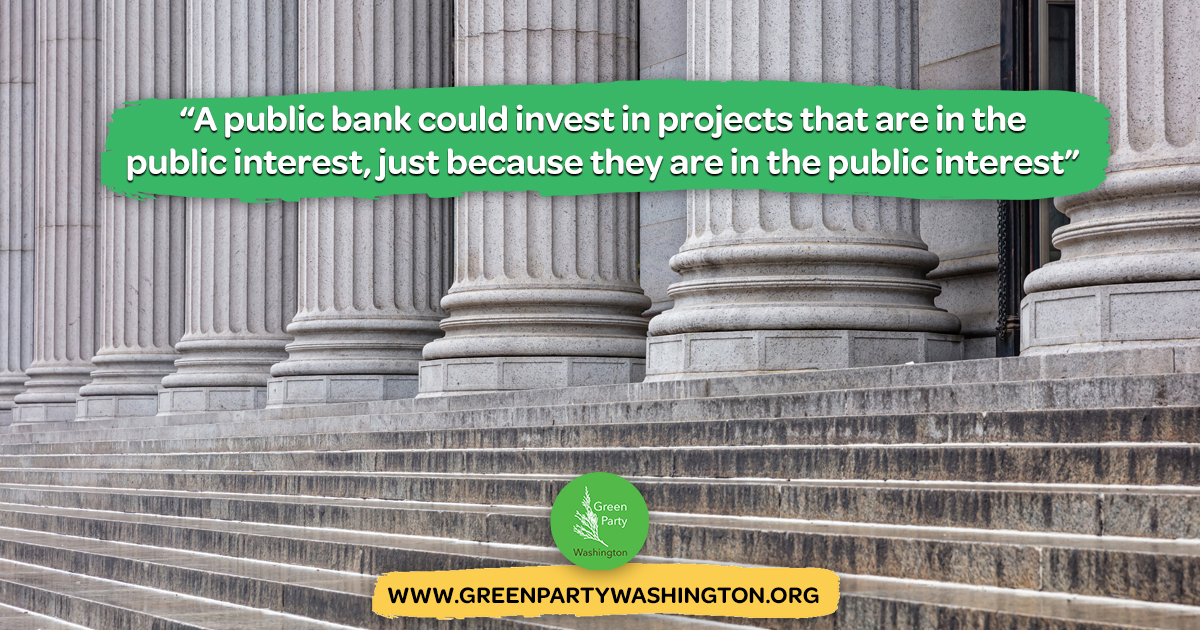 Presently all of the revenue of our state, local and tribal governments is deposited with private-sector banks. All of the financing that our various governments obtain is issued by those same banks. The profits from these two aspects of handling our money float off to the shareholders of those banks.

Senator Hasegawa (D-11) has been introducing public banking bills in the state legislature ever since the 2008 Wall Street scandal. This year the prime sponsor of SB 5188 is Patty Kuderer (D-48), and for the first time ever a public banking bill has received a hearing, which took place on Jan 28, 2021.

SB 5188 would set up the Washington State Public Bank, a cooperative bank which would be owned by the state and any local or tribal governments that chose to join. It would be authorized to invest in infrastructure projects of the state or of any local or tribal government, whether or not a member. It would be governed by a nine-member board, with five members elected by members of the cooperative, three public members with relevant expertise appointed by the Governor, and the State Treasurer serving as the remaining member. Several layers of security precautions are aimed at obtaining for the bank one of the three highest levels of credit ratings – and, not so incidentally, protection against default.

In the world as a whole, 23 countries have public banks of various kinds and they hold collectively about 40% of the world’s banking assets. In the United States the foremost example of a public bank is the Bank of North Dakota, which has brought its aid and assistance to the people, local businesses and local banks of that state for a hundred years. Most recently it brought North Dakota through the 2008 collapse in better shape than any other state, with proportionately fewer bankruptcies and foreclosures and less unemployment.

The League of Women Voters of Washington has decided to support passage of SB 5188 because, at least in part, it would deprivatize a fundamental part of our economic and financial infrastructure.

SB 5188 had a public hearing in the Senate Business, Financial Services and Trade Committee on Jan 28.

The bill has been scheduled by that committee for an Executive Session on Feb 9. An executive session is where a committee votes on whether to pass a bill along in the legislative process. Members of the public may listen in to an executive session, but may not speak. 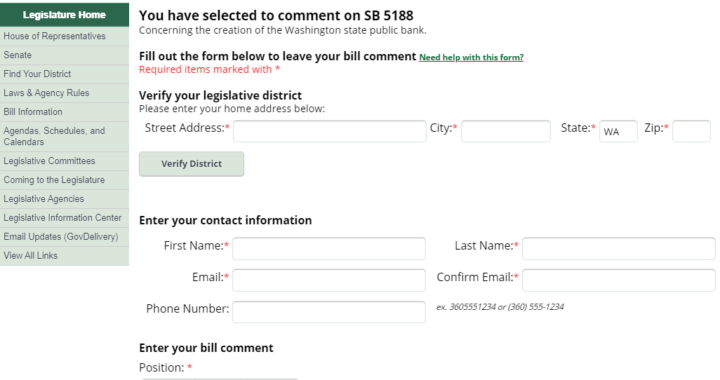 As you will see, the comment page has space for a short comment. If your Senator is one of the sponsors of the bill, add a comment thanking them for sponsoring it. You can see the list of sponsors here.