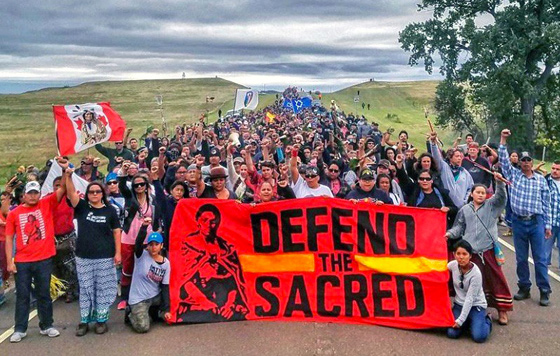 "Many Americans have decried the horrific images coming from this front line struggle," said Stein/Baraka campaign manager David Cobb. "But brutal exploitation and oppression has been the lived experience of the indigenous people of this continent for 500 years. Yes, we must stop this pipeline. We must also come to terms with the history of attempted genocide and colonial conquest," Cobb added.

The human rights crisis continues to unfold at Standing Rock in North Dakota, where hundreds of water protectors have been arrested, pepper sprayed, shot at with rubber bullets, threatened with sound cannon and brutalized by police forces from seven states for peacefully protesting the construction of the Dakota Access Pipeline. The Stein/Baraka campaign recently issued an official statement in support of the water protectors, and called on the US government to honor indigenous treaties and the right to free, prior, and informed consent under the UN Declaration on the Rights of Indigenous Peoples.

"The shameful sight of militarized police at Standing Rock, inside the boundaries of treaty land claimed by the Great Sioux Nation through the 1851 Treaty of Fort Laramie, is the latest instance of a continuous thread of colonial oppression against indigenous people since 1492," noted Green Party vice-presidential candidate Ajamu Baraka. "Our campaign is committed to establishing meaningful, respectful dialogue with indigenous peoples and ensuring that U.S. policies do not interfere with their rights to life, dignity, and autonomy."

"President Obama must go to Standing Rock himself, as Ajamu Baraka and I did in September, to witness what is happening," said Dr. Jill Stein, Green Party candidate for President. "This violation of human rights has no place in our country, nor any other country in the world. The Dakota Access Pipeline must be stopped immediately," she continued. "We must honor the historic role that indigenous people have always played - and must continue to play - in protecting Mother Earth and the ecosystems our lives depend on. As our planet's survival hangs in the balance, it is more critical than ever to respect the rights and sovereignty of our indigenous brothers and sisters - who are protectors for us all."