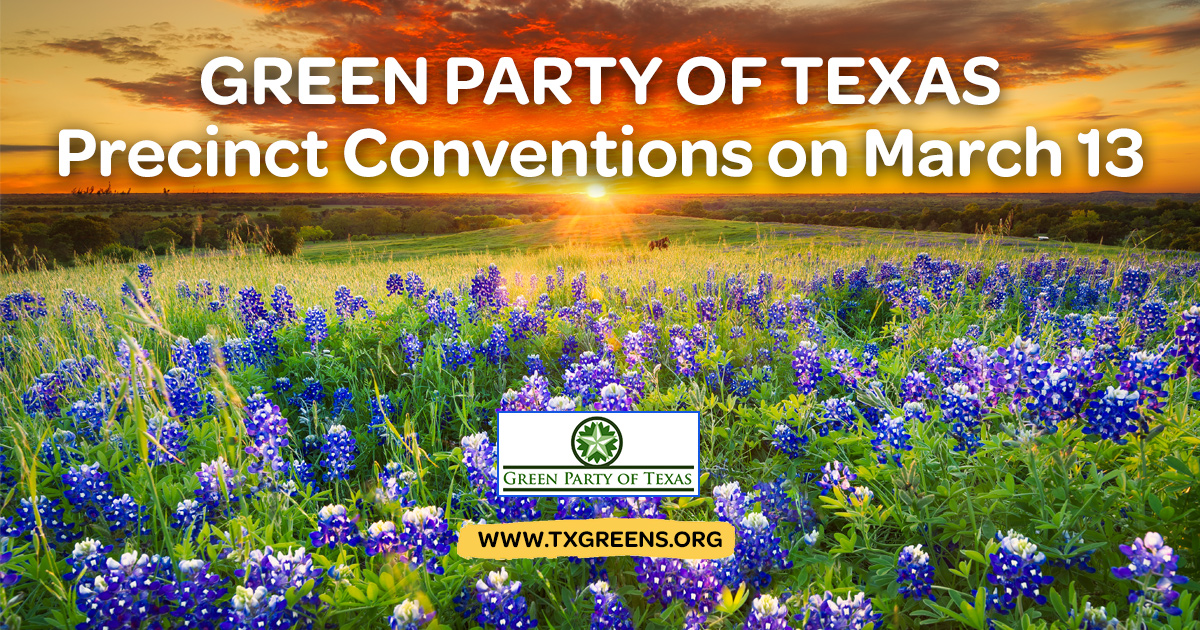 The Green Party of Texas (GPTX) urges progressive voters in Texas not to vote in the Republican or Democratic primary elections in March. Voting in either primary disqualifies you from signing the Green Party's ballot access petition.

Instead, on the following Tuesday, March 13th, come to your county's night of Precinct Conventions. Bring your voter registration card. There you can vote and pick up petition sheets for your friends to sign.

Unlike recent years, when we had a ballot line, GPTX has only a small number of candidates who filed to run this year. On the statewide ballot we hope to have

Visit our website between now and March 13, or watch our Facebook page, for more information on how you can be part of this year's Green Revolution, including locations for Precinct and County Conventions.

Why We're Doing This

In 2016, the Green Party of Texas had no candidate for statewide office receive the necessary 5% of the vote to retain a ballot line for the 2018 election. We came close: Martina Salinas took 3.26% in the race for a Railroad Commission seat, the best showing ever for a Texas Green against both Republican and Democratic opposition. (In the elections of 2000, '10, '12, and '14, Greens who ran with no Democratic opponent have garnered 6-10% in statewide races.)

This petition sheet is your tool for expanding and enhancing democracy in Texas. Make multiple copies (legal-size!) of page 1. Read the instructions on page 2 very carefully. Talk to friends, relatives, and total strangers about its importance. If they are eligible to sign, convince them to sign.

In order to be valid, a signature must be gathered in the 75 days beginning 14 March from:

Those who gather signatures need not meet these criteria. They need only be of legal age to sign their petition sheets. Each petition sheet has space for 10 signatures. A signature line contains places for the voter's full name, street address, home county, birthdate, and (optionally) voter registration number. Yes, the birthdate is required for verification.

All petition sheets submitted to the state must be signed by the signature collector in the presence of a Notary Public. The actual deadline for submitting petition sheets to the Secretary of State's office is the Tuesday following Memorial Day, or 29 May 2018.

For more detailed information about the petition drive, see this page at txgreens.org.

Let's be honest about this: Given the political climate and the current state of the Party in Texas, the prognosis for success in 2018 is not great. GPTX has undertaken five ballot access drives. It was successful in 2000 and 2010, but fell short in 2004, '06, and '08.

Even in a state where 85% of voters skip the primaries, finding willing signatories can be difficult. People who desperately want a third option on the ballot may still have trouble thinking beyond the two-party paradigm. They may also be reluctant to give anybody their addresses for fear of being sold to mailing lists.

Typically, the number of signatures gathered should exceed the requirement by 50%. Historically, about one-third of signatures collected in these drives do not satisfy all the criteria.

Even if the Greens get their ballot line back, at least one candidate must top 5% to keep the party going in 2020. However, difficult though it may be...

... with enough volunteers and enough enthusiasm, this is entirely feasible!

We are banking on the petition drive to revive the People Power that has energized GPTX in years past.

We know that a majority of American voters (yourself included?) are fed up with the corporate parties and want something different on the ballot.

Even if 2018's drive does not succeed, we can generate camaraderie and have fun spreading the word about the Green Party's platform and priorities: People, Planet, and Peace over Profit. We can also look upon this year's drive as a rehearsal for 2020, when the stakes will be higher.

The Libertarian Party did manage a 5% showing in 2016, so their candidates will appear on the ballot this year without having to petition. That is good news and bad news for the Greens:

good news because that makes one fewer petition drive competing for signatures, but
bad news because voters who just want something other than Tweedle Dee and Tweedle Dum already have a third Tweedle to vote for.

While the Greens share some policy positions with the Libertarians—e.g., big decreases in military expenditures, legalizing cannabis—we also have some very different views on economics and the environment. If you are concerned about climate disruption and its effects, remember that the Green Party is the only US party of any size with a plan to follow the recommendations of scientists and phase out fossil fuels.