Trump 'uses racism as a guiding principle for governing' 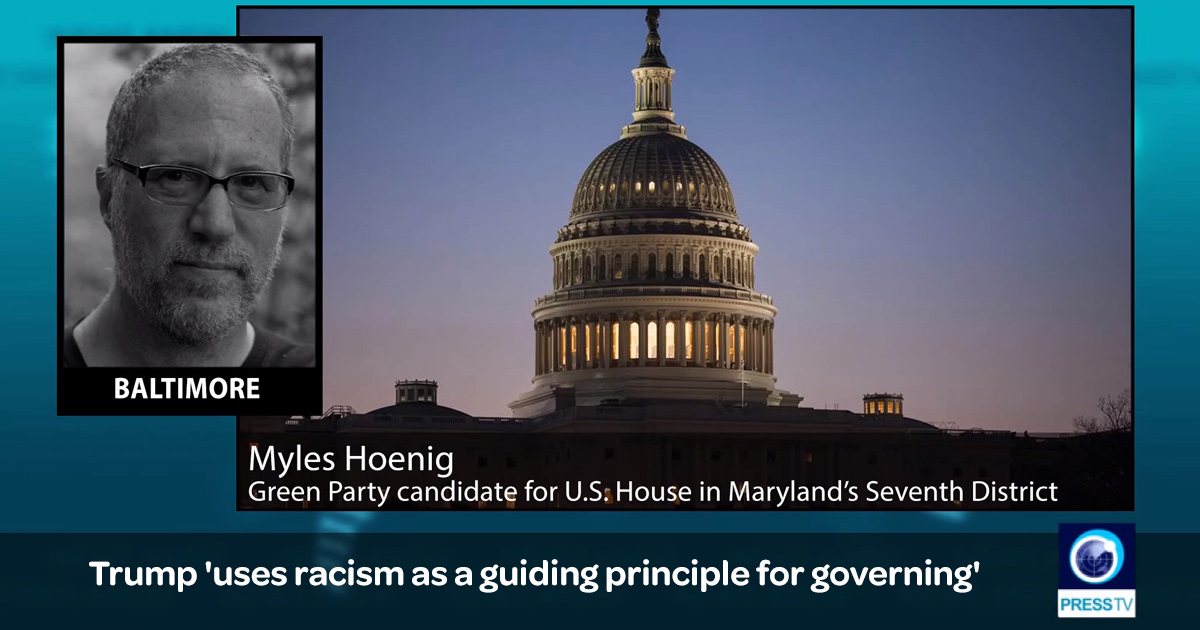 Although racism is bedrock of American policy, President Donald Trump wears it openly and "uses racism as a guiding principle for governing and public pronouncements," says Myles Hoenig, an American political analyst and activist.

Hoenig, a former Green Party candidate for Congress, made the remarks in an interview with Press TV on Tuesday on while commenting on the falling approval ratings of both Trump and the Republican Party.

Fewer than three in 10 Americans have a favorable view of the Republican Party, according to a CNN poll.

A separate poll says most Americans disapprove of Trump's leadership and see him as a divisive figure who has not fulfilled his campaign promise to positively change the US government.

More than twice as many Americans - 66 percent vs. 28 percent - say Trump is doing more to divide the country than to unify it, according to an ABC/Washington Post poll published on Sunday.

"President Trump and his party are the best thing the Democrats have going for them, considering how decrepit their own standing is with the public and their commitment to change virtually non-existent. Poll numbers are sinking rapidly, and have been doing so since his inauguration in January. Although his standing with the base of his support remains strong, we're even seeing potential cracks in that," Hoenig said.

"It doesn't help that Trump praises Nazis as 'some very fine people' and those black athletes standing up against racial injustice as SOBs. NASCAR, the national organization that manages auto racing, is normally associated with Trump supporters; conservative, often southerners, Confederate flag wavers, etc. But even now, one of their own legendary heroes, Dale Earnhardt, Jr., is siding with the 'SOBs,'" he added.

'All presidents are narcissists'

"All presidents are narcissists, but Trump wears it like a badge of honor. Many are deep down racists, but this president uses racism as a guiding principle for governing and public pronouncements," the analyst noted.

"Every president may make a faux pas, but this president is writing a dictionary of new words, from covfefe to Nambia. Having him as nominal head of one's party is both embarrassing and detrimental to achieving any kind of credibility with a larger audience," he said.

"It is no wonder that their poll numbers are going down. Not only are the president's numbers falling, but so is his party," he stated.

"During President Obama's presidency the Leader of the Senate, Mitch McConnell made it a point to deny Obama any possible success. For this, it was known as a Do Nothing Congress, as so little was done and so much thwarted, for good or bad," Hoenig said.

"Now that this same Republican Congress can't get its own bills passed, and especially what the president campaigned on, health care in particular, and being in control of each chamber of Congress and the White House, it is no wonder that a larger majority of Americans continue to view them in a negative light," he concluded.