It's on You Today. Vote for the Movement. | Flowers for U.S. Senate 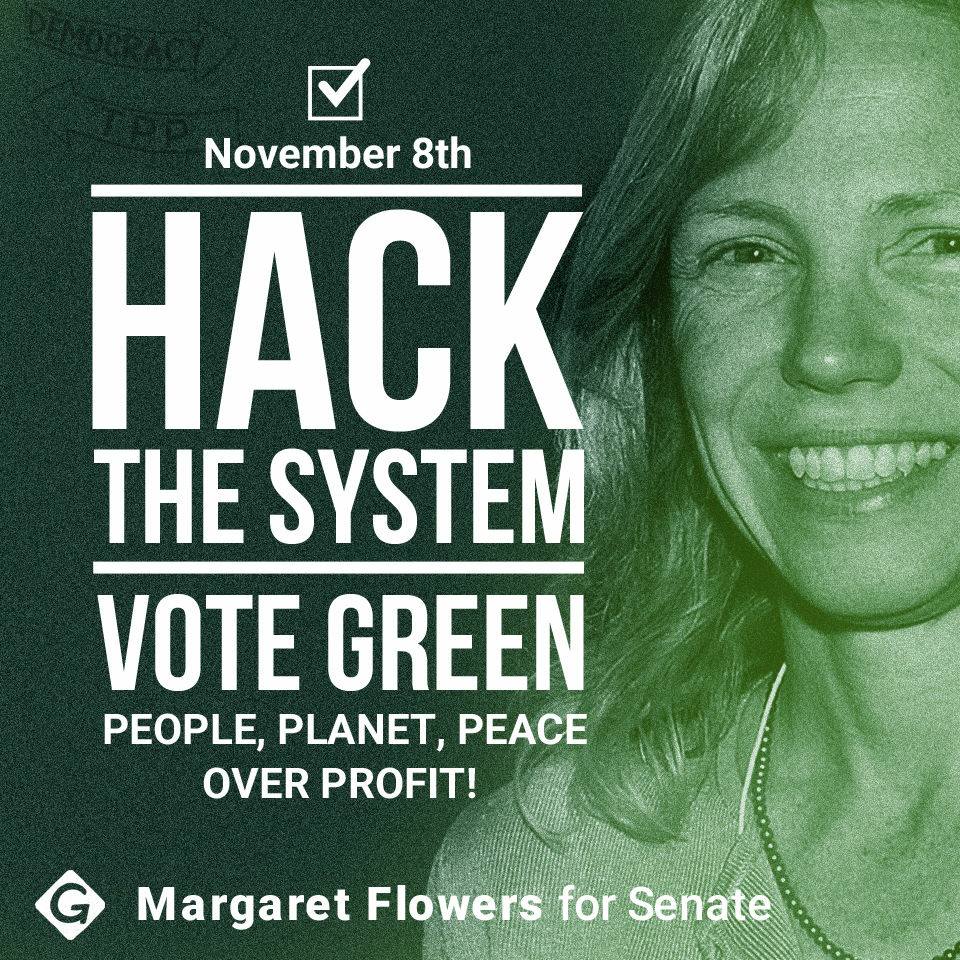 Today is the day!

After decades of watching Big Money cast aside the people's priorities, voters' expectations are tempered and many people are going through the motions of voting with heavy hearts.

But a new chapter begins when you vote Green today. No matter your political affiliation, you have the opportunity to vote for Green Party candidates today wherever you live in Maryland - from city council and mayor in Baltimore to Congress, the Senate and the White House!

If you haven't voted yet, make sure you vote today before the polls close at 8 pm. Check the Board of Elections website to see where you can vote and what you need to bring.

This campaign for the U.S. Senate is a movement of movements. Activists and grassroots organizers have always led our social evolution and this campaign is here to further their visions with political power.

Environmentalists have joined this campaign because the planet and Indigenous peoples do not need another pipeline for fracked oil. We need a Green New Deal that moves us to 100% renewable Green energy by 2030, creates 20 million new jobs and preserves the planet for our children and future generations.

Bernie Sanders supporters and anti-corruption activists have joined this campaign because voters are exhausted by politicians who are dependent upon donations from criminal banks, exploitative health and pharmaceutical companies, rapacious fossil fuel corporations and manufacturers of weapons of war. Thanks to you, this campaign is 100% people funded. No PAC money, no corporate money. While my Democratic opponent spent years raising money from entrenched, corporate interests, I will be a Senator that is free from these conflicts of interest.

Medical doctors and health professionals have joined this campaign because people living in the United States have the highest healthcare costs and poor outcomes. Democrats and Republicans insist on us remaining the only economically advanced country without universal healthcare, but I am the only candidate that supports universal Improved Medicare-for-All.

Civil rights and human rights activists have joined this campaign because native, black and brown lives matter. We demand the demilitarization of police departments and community power to investigate, hire and fire police officers. I support the decriminalization of drugs and an end to mass incarceration, which is expensive and ineffective. Law enforcement should not be misused for raiding native American land or for the indefinite detention of undocumented people.

Educators, students and parents have joined this campaign because we cannot allow the financial industry to sell billions of dollars' worth of predatory student loans to young people seeking an education. This is no way to treat our kids, especially when every $1 invested in education yields a $7 economic return. For a fraction of the amount we spend on the military-industrial complex, we can and must implement tuition-free higher education.

Veterans against war have joined this campaign because our leaders insist that members of the armed services and military families risk everything for the interests of the wealthy few. People want peace, but my Democratic opponent has watched in silent consent as the President orders military attacks in seven countries, increases foreign military aid and approves the sale of weapons to governments that fund terrorist activity. As your senator, I will support our troops by showing restraint when it comes to using military force. I will resist indefinite, for-profit war. I will support foreign policy that starves violent extremists of weapons and money.

So, if you support this movement of movements, then today, go to your local voting station and vote with a full heart and an unfettered conscience. Put People Power, Peace and the Planet before Big Money and tell your friends and family to do the same. One way to do that is by sharing this on your social media.

Our volunteers and I are campaigning vigorously, down to the last minute. Supporters are donating. You are the critical, final piece of this campaign. The movement will continue to build tomorrow, but today, it needs you to pause what you're doing and go to your voting station. Bring your friends and family!

Finally, if you are close to Baltimore, join me and other Green Party candidates for a celebration after the polls close at Sweet 27 on the corner of Howard St. and 27th St.