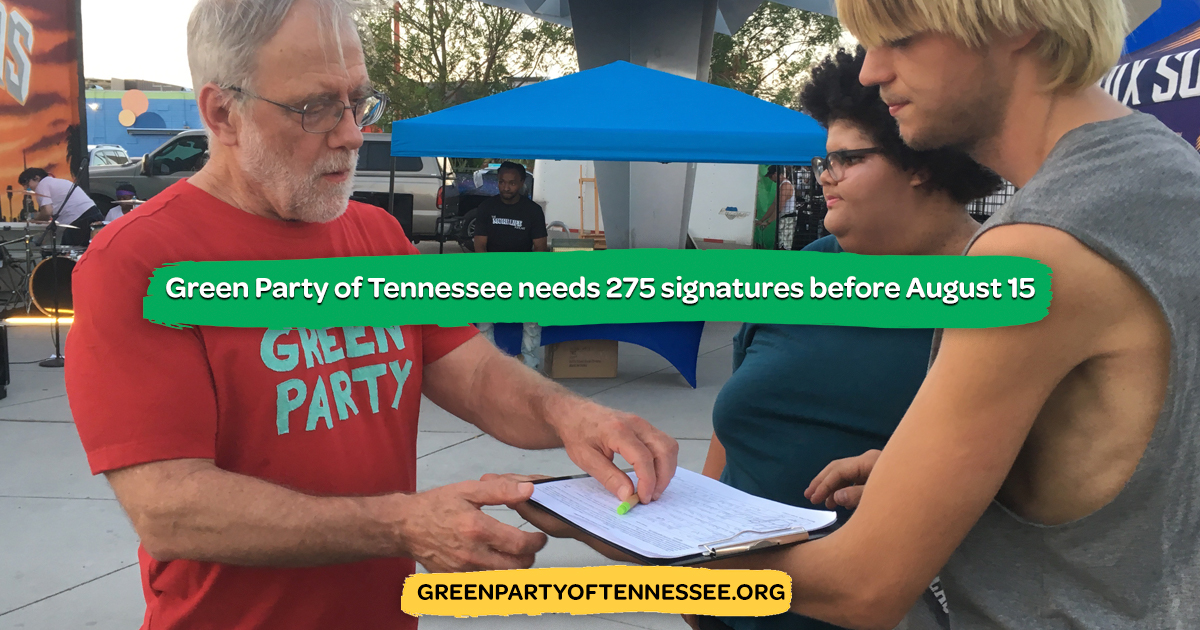 The Green Party of Tennessee is setting up a social distant signing opportunity at 4018 Nebraska Ave, Nashville TN, on Saturday, July 25, 2020, from 8:00 am until noon. Socially distant arrangements: table with petition, hand sanitizer, wipes, and pens (or bring your own pen). Six-foot intervals will be marked on the driveway. Exit along front walk to avoid walking close to those waiting to sign. Masks required.

Please write your legislator to allow Green Party on the ballot due to the pandemic difficulty of getting out and collecting signatures.

The Green Party is the only party with a platform that would change the system to serve the people.

Why change the money system? When the predominance of the money is issued as interest bearing debt new loans must continually be made to pay the interest or the system falters. When money being destroyed (loans paid) exceeds money being created (loans being made) we have a recession or depression. The money system is kind of a pump and dump scheme; blow up a bubble (the pump) lending a lot, then stop lending, (the dump) loans go into default, property used for collateral goes into foreclosure which then gets bought up for pennies on the dollar by those running the system and then (the pump) loans are made again. The rich get richer, the poor get poorer. Has the system extracted all the wealth of the planet? No? Then the system will not change itself to end growth.

The only way to have a steady state economy is to have permanently circulating asset money issued by government (Positive Money) for the general welfare as its first use. Humans have known that for centuries, but the current system empowers the greediest insane among us to steer public policy in their own interest. We should examine the mass psychosis that allows this to go on and on becasue so far all we've been able to do is suggest some deck chairs be moved on a sinking Titanic.

To go beyond just managing the status quo, we need to first recognize that the dollar system evolved not as a tool of imperial statecraft, but as the project of a transnational elite that has effectively usurped control of an international public good, the money system. As long as active confrontation with elite interests remains wanting, the dollar system will persist as a zero-sum game—a state of affairs that, in the long run, is unsustainable for the global political economy. As Herbert Stein said: "that which is unsustainable will not be sustained." however it appears to me; that which is unsustainable is being sustained at great cost and everyone with a microphone talks all around it but never on it. Time to insist.