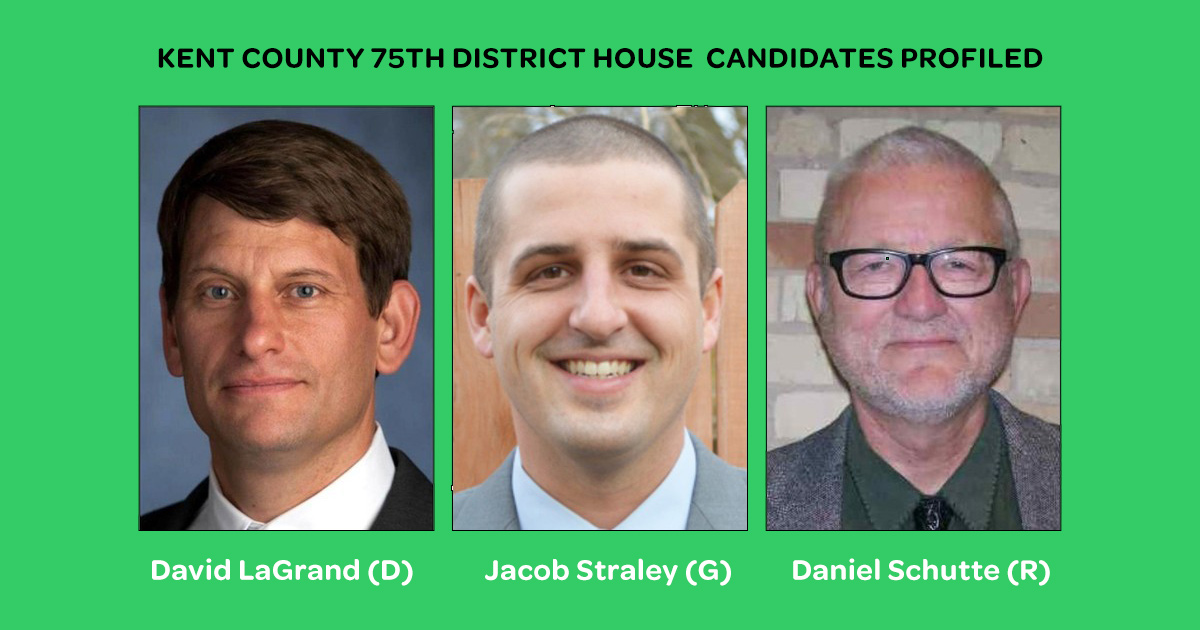 KENT COUNTY, MI -- Three candidates -- Democrat David LaGrand, Republican Daniel Schutte and Jacob Straley, of the Green Party -- will face off in the November election in a bid to represent Kent County's 75th District in the Michigan House of Representatives.

The district, which includes the core of the city of Grand Rapids and leans Democratic, is currently held by LaGrand, who is seeking another term.

This year, MLive Media Group partnered with the League of Women Voters of Michigan Education Fund to provide candidate information for readers. Each candidate was asked to outline their stances on a variety of public policy issues.

Information on all state and federal races and many of Michigan's county and local races will be available at Vote411.org, an online voter guide created by the League of Women Voters.

Here's a look at the candidates:

Here's a look at how the candidates responded to questions about their top priorities, how they would improve educational outcomes in schools, protect Michigan's natural resources and boost the state's economy. Responses, in some instances, have been edited for clarity and grammar.

What are your top three state legislative priorities and how would you address them?

Health care: Need to cover as many people as possible so that citizens can live productive lives without the stress and fear of lack of medical coverage."

"Our campaigns three priorities are energy, education, and wages.

Michigan's electrical energy could be transformed to 100% renewable in 20 years if we had legislators with experience in the field. Being an electrician and having worked in the solar energy industry in California, I have experience other candidates do not have.

Our K-12 system simply needs better funding. We need to reallocate funds to our K-12 system to include better pay for teachers, more teachers to create smaller class sizes, and safer buildings.

Wages for any job need to be a minimum of $15/hr to afford the cost of living."

What measures do you support/propose to achieve improved educational outcomes and accessibility for Michigan students from early childhood through post-secondary education?

"Expulsion and suspension models of discipline fail. We need to fund full use of restorative practices in schools.

We need a funding model that moves beyond equal funding per pupil and fully funds students needs, such as special ed, ESL, poverty related obstacles.

We need a free k-14 model, and to aggressively fund all higher ed with tax dollars not student debt. We should also have free day care on every higher ed campus."

"One measure I would propose for our K-12 education system is better funding. I have continually heard stories about large class sizes which makes it more difficult for students to learn and receive one on one time with a teacher. I do support extended publicly funded education into the college level."

What policies do you support to increase jobs and help Michigan residents improve their economic positions?

"One of the largest employment opportunities was have as a state is transforming our energy grid to renewable energy. This will create jobs in manufacturing, engineering, installation, and maintenance. We should offer small grants to small business startups that don't have access to traditional funds. Individuals deserve to make living wages at 40 hours a week without assistance. The minimum wage should be tied to the cost of living."

"We should restore net metering, offer incentives for private solar installations and electric vehicles, support cities who are the best providers of clean drinking water and managers of waste water, and discourage sprawl. Ideally, we eliminate any use of fossil fuels. In the interim, Line 5 is an unacceptable risk to our great lakes system and should be closed."

"We have reached a time where we know how to produce electrical energy cleanly and efficiently. With the rise of electric vehicles, our dependency for crude oil can be dramatically reduced. Moving our state to 100% renewable energy would reduce the demand for natural gas as well. This reduced demand of both crude oil and natural gas would eliminate the need for a pipeline under the Straits, ending Line 5. Individuals and corporations alike need to be financially responsible for polluting our environment."

What state policies do you support regarding campaign funding and voting rights?

"We should have publicly financed elections and eliminate campaign contributions from any other source. The easier it is to vote, the better."

"Our current campaign finance laws have too much room to lose track of where money comes from. Candidate committees should not be able to donate to other candidate committees during an election cycle. I would support measures to stop political action committees from donating funds to candidates and spending money on behalf of candidates."

"Mass incarceration is our nation and our state's greatest scandal, and is inextricably linked to race and class injustice. Our abandonment of any real interest in a safety net for all citizens is second, and likewise linked to race and class injustice. I believe that all citizens deserve decent housing, food, health care, education and freedom. I also believe that all citizens deserve the opportunity to pursue meaningful vocations, and that we need to revalue child care by parents and reward that care in real ways. I believe that the only way to make real progress on this vision is with a progressive tax."

"We, as people, I think need to have a better understanding and respect for diversity. Our societal problem of discrimination based on race, class, gender, sexual orientation, age, nationality, religion, or physical or mental ability is learned. We need to offer equal opportunities and protections for all citizens. I would support policies that uphold equality for all."

All responses in the voter guide were submitted directly by the candidate and have not been edited by the League of Women Voters, except for necessary cut if a reply exceeded character limitations. Spelling and grammar were not corrected. Publication of candidate statements and opinions is solely in the interest of public service and should not be considered as an endorsement. The League never supports or opposes any candidates or political parties.