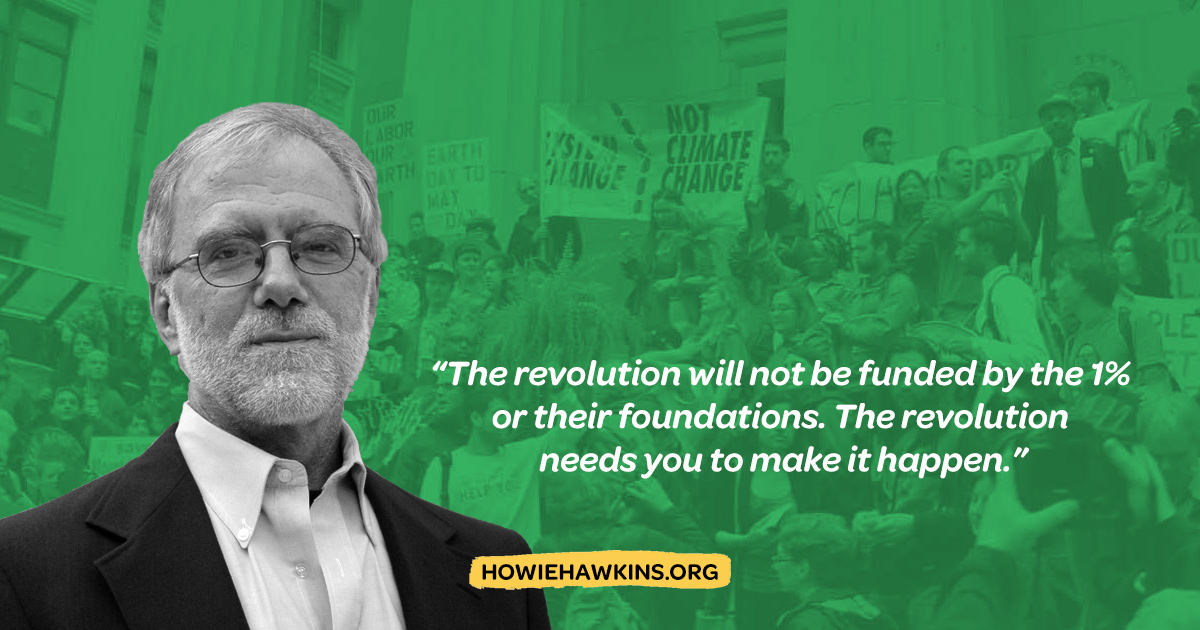 Syracuse, NY – We need your help to raise an additional $7,000 in the next 7 days – or $1,000 a day.. We have to file our first financial report with the State Board of Elections based on how much we have raised by July 12.

This would bring Howie Hawkins’s fundraising total to $25,000 – behind where we were 4 years ago, but a respectable number for a third party candidate, especially in light of the media "Green Out" he has been facing. Fundraising is the prime thing that most of the media covers. They use it to justify the coverage they give – or don’t give - to the various candidates.

You can catch Howie tonight at 8:00 PM ET on his Facebook page on his weekly livestream, talking to Michael Sussman, the Green Party’s Attorney General candidate. You can also watch a video of Howie at the massive immigration rights rally in NYC last Saturday. And listen to Howie be interviewed by Susan Arbetter on Capitol Pressroom about the failures of the Governor’s Buffalo Billion effort.

Howie once again this week called for New York to eliminate the dominant role that large donations play in New York by calling for a full public campaign financing system based on the Clean Money model. Howie also said it was time for New York to declare its independence from fossil fuels and commit to go to 100% clean energy by 2030.

How important do you think it is to have a socialist candidate running for Governor who is willing to fight for public ownership of our energy system, create a state public bank to fund infrastructure like a public broadband utility system?

As we swelter through a week-long heat wave that is setting numerous records in the Northern Hemisphere, how important is it to have a climate champion running for Governor? One of the first people to call for a ban on fracking when everyone else was just calling for a moratorium. Someone who helped organize the Clamshell Alliance in the 70s to stop the Seabrook nuclear power plant.

Can you make a donation to elevate Howie’s call to establish a single payer health care system? To end mass incarceration and the War on Drugs? To legalize the use of marijuana? To stop high stakes testing in our school system? To end segregation in housing and schools?

Since retiring early this year as a Teamster loading trucks for UPS on the midnight shift, Howie has been able to work 24/7 to spread the Green Party message across New York. He has crisscrossed the state to speak at rallies and community meetings. Can you help him with a donation to reach his next fundraising goals - $1,000 a day for the next seven days?