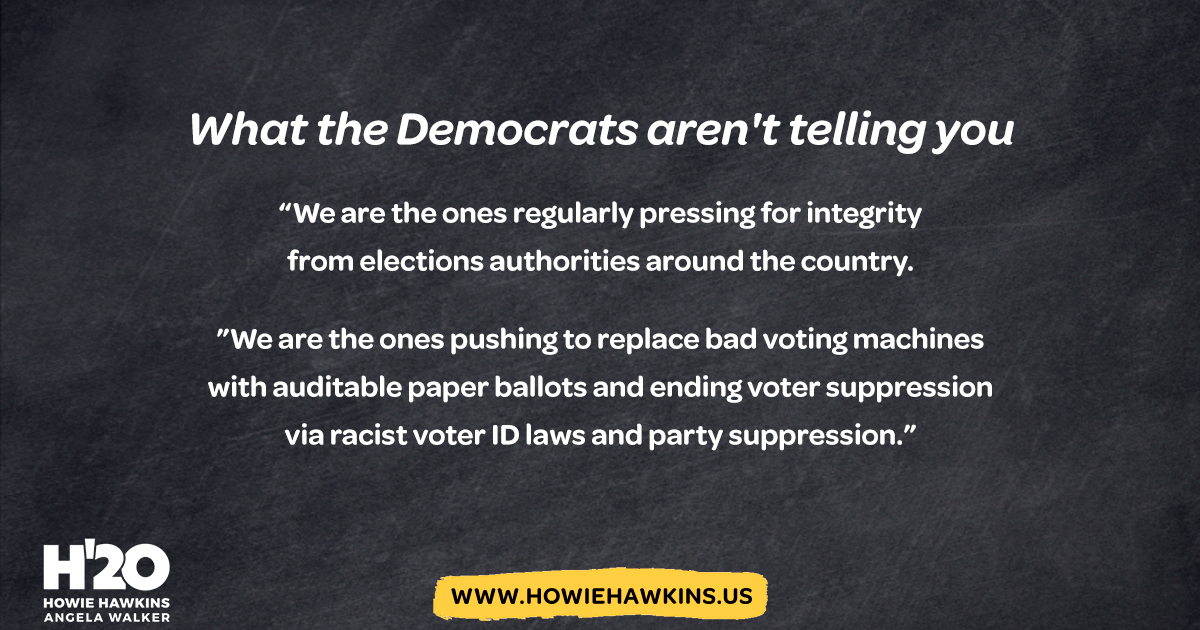 Well, we finally made the mainstream media, but while 2016 was all about slandering Stein/Baraka as Russian assets, this year it's that Howie and Angela are tools of the Republican Party that are denying people in Wisconsin their absentee ballots.

Nothing could be further from the truth. The Green Party's track record as being the party of election integrity is clear. We are the ones regularly pressing for integrity from elections authorities around the country. We are the ones pushing to replace bad voting machines with auditable paper ballots and ending voter suppression via racist voter ID laws and party suppression.

The simple solution in Wisconsin is for the Democrats to immediately stop playing games and using delaying tactics to prevent voters from being able to support third-party candidates, get new ballots printed that include Howie and Angela as a choice, and send them out. Both major parties collude to boost their own electoral chances in a myriad of ways and deny voters' and candidates' major rights.

So what exactly is happening in Wisconsin? Here's a quick run-down:

The Democrats are telling the media that they've mailed out thousands of ballots, when really county elections officials printed mailing labels and count these as "sent." This is pure spin and a departure from the truth. They are waging a media battle against us to cover up their own failure to respect the democratic process and to ensure that accurate data was available on demand.

How can we trust that our elections will be fair, when the process is used as a soccer ball between the two ruling parties?

Further, we have never had any conversations with the state GOP. They are not directing our legal actions. We are compelled by the wishes of nearly 6,000 Wisconsinites who want to see the Green Party on the ballot.

We will not back down from our position that Howie Hawkins and Angela Walker should be placed on the ballot without further delay. Our signatures are solid, the paperwork is in order, and in the interest of serving democracy, the Democrats should abandon the spin and misinformation and step aside so that absentee ballots can be sent out.