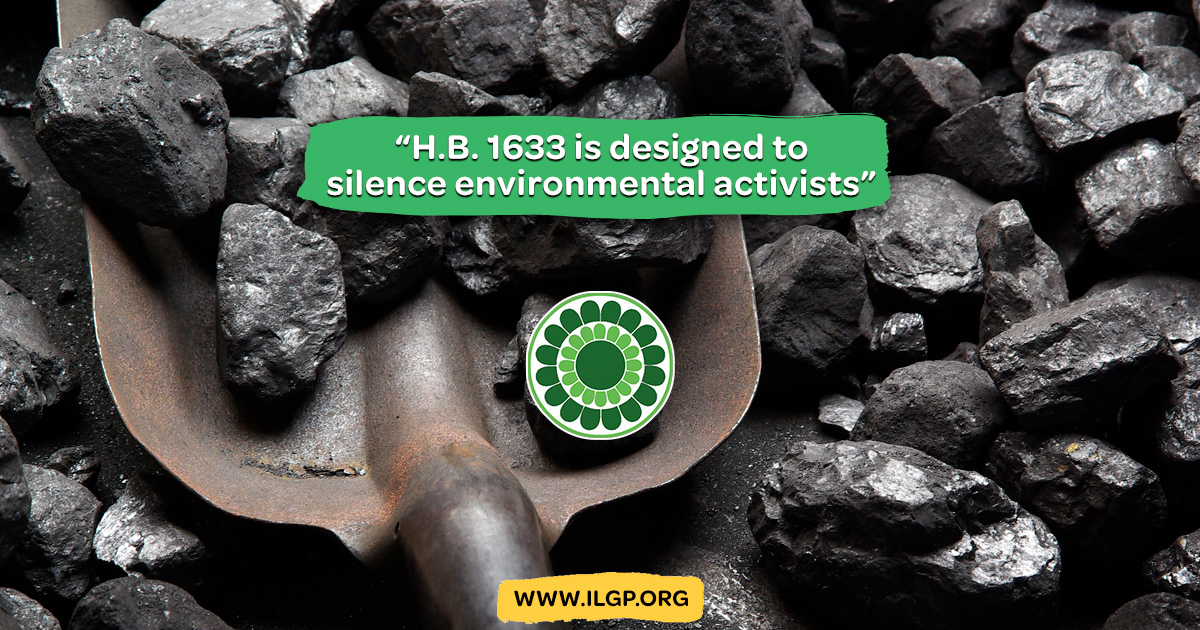 As we reported in a March newsletter, the Illinois Green Party opposes Illinois House Bill 1633, and we ask you to do the same. Unfortunately, despite our opposition and that of a number of other social justice, civil rights and environmental organizations, and despite there being many more witnesses opposing the bill than supporting it, the bill passed by a large majority in the House.

However, the fight continues to kill the bill in the Senate, and we again ask for your support. HB 1633 is set for a hearing before a special subcommittee of the Senate’s Criminal Law Committee, and the full Committee itself, on Tuesday, May 14th.

If you see your own State Senator on the list of Committee members at the above link, please click on the link for your Senator and contact your Senator right away to express your opposition. Even if your State Senator is not on the Committee, we ask you to please file witness slips opposing the bill, at both hearings. If you have never filled out a witness slip before, it is best to first create an account by registering here. This is a short and easy process. However, you can also fill out a witness slip as an unregistered user, by following the procedure described beginning on page 21 of this user manual.

H.B. 1633 is a fossil fuel industry bill designed to silence environmental activists and protect industry profits by threatening activists with steep fines, felony charges and lengthy jail sentences for exercising their freedom to protest deadly pollution and carbon emissions. In addition to the Illinois Green Party, over 50 organizations have signed and delivered the following letter to the Senate and Governor Pritzker condemning this ALEC legislation. The letter provides useful talking points in explaining our opposition.

To Members of the Illinois Senate:

The undersigned racial justice, criminal justice reform, and other civil society groups and individuals urge you to oppose Illinois House Bill 1633. The bill undermines the promising reform efforts in Illinois and nationally designed to remedy the harm caused by mass incarceration, and it threatens to silence already marginalized voices. HB 1633 is an unnecessary proposal that creates new draconian penalties for conduct already covered by existing criminal statutes and could have dire unintended consequences, including for youth. HB 1633 is part of a national trend of so-called “critical infrastructure” legislation promoted by the American Legislative Exchange Council (ALEC) that is intended to neutralize climate justice activism. We urge you to oppose HB 1633.

Critical infrastructure bills disproportionately affect some of the most underrepresented communities, criminalizing their right to protest. These bills target many already marginalized voices, in reaction to some of the most high-profile protests in recent history. Native Americans—women, in particular—are playing an important role as “water protectors” in protests against pipelines; low-income communities of color are most affected by unchecked environmental pollution; family farms have the most to lose by unfair land-grabs for large infrastructure projects. These communities have a right to peacefully resist environmentally unsafe and unjust policies, and unchecked corporate abuse.

HB 1633 is purportedly designed to protect critical infrastructure, but the definition of “critical infrastructure” is overly broad and would cover large swaths of the state in urban, suburban, and rural areas, creating the unintended consequence of ensnaring many in Illinois’ already overburdened criminal justice system. For example, someone trespassing in rail yards or on el-tracks without intent to damage or destroy could be charged with a class 4 felony punishable by a fine of $1,000, one to three years imprisonment, or both. Currently, criminal trespass to property is punishable as a Class B or Class A misdemeanor, depending upon the nature of the offense (720 ILCS 5/21-3).

Additionally, the bill does not distinguish between criminal damages of one dollar or a million dollars. Each would be eligible for the same penalty of ten years in prison and a $100,000 fine. At a time when many people, including lawmakers, have recognized the deleterious effects that mass incarceration has had on society and have attempted to rectify laws that have criminalized certain conduct or imposed unreasonable penalties, HB 1633, is a giant step backwards. By creating a whole new class of nonviolent offenders who could serve serious prison time, it is antithetical to criminal justice reform.

Environmental advocacy, including civil disobedience, does not threaten physical infrastructure or safety, it threatens corporations that put profits and pollution ahead of justice and the environment. Critical infrastructure bills are based on model legislation crafted by corporate interests to establish special protections for some private industries engaged in controversial practices that attract opposition and protest. These bills, including HB 1633, are rooted in animus against environmental justice advocacy because it threatens the profits of these corporations. Whenever states enact legislation based on animus towards particular political speech it has a chilling effect that will be felt widely.

We urge you to oppose HB 1633. From a criminal justice reform perspective, this bill is damaging, as it creates new steep penalties for conduct that is already covered under existing criminal law. These new steep penalties and special protections for so-called critical infrastructure are rooted in animus towards anti-pipeline protesters. It is inappropriate for states to seek to legislation in order to penalize individuals for their First Amendment-protected points of view.