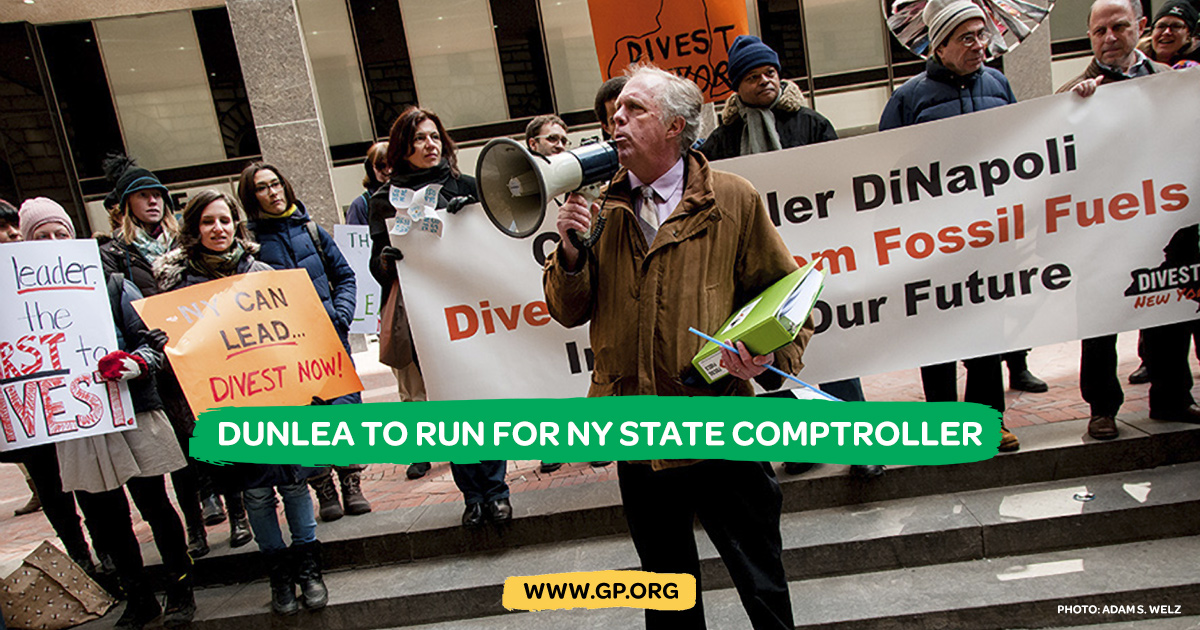 Pledging to divest the state pension fund from fossil fuels, an environmental and anti-poverty activist announced on Thursday that he is running for state comptroller and seeking the Green Party ballot line.

The activist, Mark Dunlea, is a co-founder of the Green Party and a town board member in Poestenkill. He says he will seek the Green Party nomination at the party's convention on Saturday in Rensselaer.

That's the same day as the convention of the Working Families Party, which is backing incumbent Democratic Comptroller Tom DiNapoli, as is the Reform Party. The likely Republican candidate in the race is campaign operative Jonathan Trichter, who also has the likely support of the Conservative Party, although he's a registered Democrat.

Noted environmentalist and anti-poverty activist Mark Dunlea announced today that he is seeking the Green Party nomination to run for State Comptroller.

Dunlea said that the refusal of the current Comptroller to divest the state pension funds from fossil fuels is the main focus of his candidacy.

"Time is running out for us to solve climate change. We need a State Comptroller who will be a national leader in standing up for effective climate action, starting with divesting our state pension funds from fossil fuels," stated Dunlea.

Emphasizing that he is also focusing on promoting stronger oversight of the state's finances, the candidate called for raising additional state revenues by increasing taxes on the wealthy; a return to the sound and economically fair policy of increased state revenue sharing with local governments, as was done until recently; and, increased oversight of the state's multibillion economic development program — "aka corporate welfare," as Dunlea put it.

As an elected Town Board member in his hometown of Poestenkill, NY, Dunlea played a central role in cutting local property taxes every year during his tenure on the board.

No Greater Issue Than Climate Change

Climate change is the greatest threat to humanity. Already the amount of carbon in the atmosphere has passed 410 parts per million (ppm); we would need to reduce that level to 350 ppm to avoid catastrophic climate change. In Paris, the developing world was able to get the industrial polluting nations to agree to reduce the target to cap global warming at 1.5 degrees Celsius rather than 2 degrees. Many scientists believe we will pass that 1.5 degree tipping point as soon as 3 years. Last year, the United States was hit by three massive, level-5 hurricanes, which flooded the nation's fourth largest city, Houston and caused Puerto Rico to lose power and drinking water for 6 months. Meanwhile, wildfires were devastating southern California.

"Since 350.org and other groups started the divestment campaign five years ago to address global warming, we have convinced more than 700 institutions worldwide to divest more than $6 trillion in funds from fossil fuel companies. This includes the City of New York. Unfortunately, Tom DiNapoli stubbornly insists on investing more than 6 billion dollars of our state pension funds in dangerous fossil fuel companies, including a billion dollars in Exxon," noted Dunlea, who has helped coordinate the statewide divestment campaign as well as the one in NYC and statewide over the past five years.

Instead of divesting, DiNapoli has pushed for shareholder advocacy despite it having virtually no impact over the past 50 years. Federal security rules also prohibit shareholder resolutions from addressing the core business of a company – such as the need to keep 80% of the fossil fuels in the ground rather than burning it.

350.org commissioned a study several years ago that showed if the state had divested when DiNapoli was first urged by divestment advocates to do so, the pension fund would have an extra $5 billion in revenue. Dunlea said that investing in fossil fuels is a risky financial decision following the worldwide agreement to phase them out due to their significant contribution to climate change.

Dunlea also said that the next Comptroller should push for legal action to hold fossil fuel companies liable for the tens of billions of dollars in damages caused by their burning of fossil fuels, including the damage from Hurricane Sandy. New York City recently filed such litigation. The candidate said that as Comptroller he would also push for a state carbon tax to make corporate polluters pay for the damage they have caused — following up on legislation that Dunlea himself helped draft that was introduced in the state legislature three years ago.

The Governor in December 2017 announced that he supported the divestment of fossil fuels.

Building on More Than Three Decades of Public Service

Dunlea was Executive Director of the Hunger Action Network of NYS for nearly 30 years. While at Hunger Action he helped draft the Corporate Accountability Act to increase state oversight of corporate welfare programs, including requiring companies to return their state payments when they failed to create or retain the jobs they promised. Dunlea also has pushed for the state to stop rebating to Wall Street speculators the $14 billion collected from the stock transfer tax.

As Comptroller, Dunlea said he would increase oversight of the performance of local and state governments. At Hunger Action he pushed the state comptroller to improve the performance of the NYS Department of Labor in collecting the more than $1 billion stolen annually from low-income workers in wage theft and to ensure compliance by local departments of social services with laws to provide assistance to needy households.

"The State Comptroller needs to be the fiscal watchdog of the state. He or she should push for fairer taxes and revenues, reducing reliance upon regressive local property and sales taxes. The Comptroller needs to do a better job addressing the widespread corruption with how our tax dollars are spent and should advocate for solutions such as a single payer healthcare system, which could lower overall healthcare costs in the state by $50 billion or more annually," said Dunlea.

A graduate of Rensselaer Polytechnic Institute with a Bachelor of Science degree in management, Dunlea earned a law degree from Albany Law School and was admitted to the MYS Bar. He is a former member of the Legal Aid Committee of the NYS Bar Association and is a former board member of the Fiscal Policy Institute, where he also served on the economic advisory committee. He served on the Poestenkill Town Board from 1991 to 1995.

The Green Party will hold its statewide convention in Rensselaer on Saturday, May 19, at which it will nominate candidates for Governor, Lt. Governor, Attorney General and Comptroller. Dunlea is one of the co-founders of the Green Party of NY, which is committed to ecology, nonviolence, grassroots democracy, and social and economic justice.

The Green Party advocates for a Green New Deal, which would transition the state to 100% clean energy by 2030 while creating a sustainable economy that includes a jobs guarantee for all New Yorkers. "In contrast to continued reliance upon fossil fuels, as Tom DiNapoli insists on doing, investing in renewable energy could create as many as five million jobs while lowering energy costs for all New Yorkers," Dunlea concluded. "If elected Comptroller, that's the path I will put New York State on."