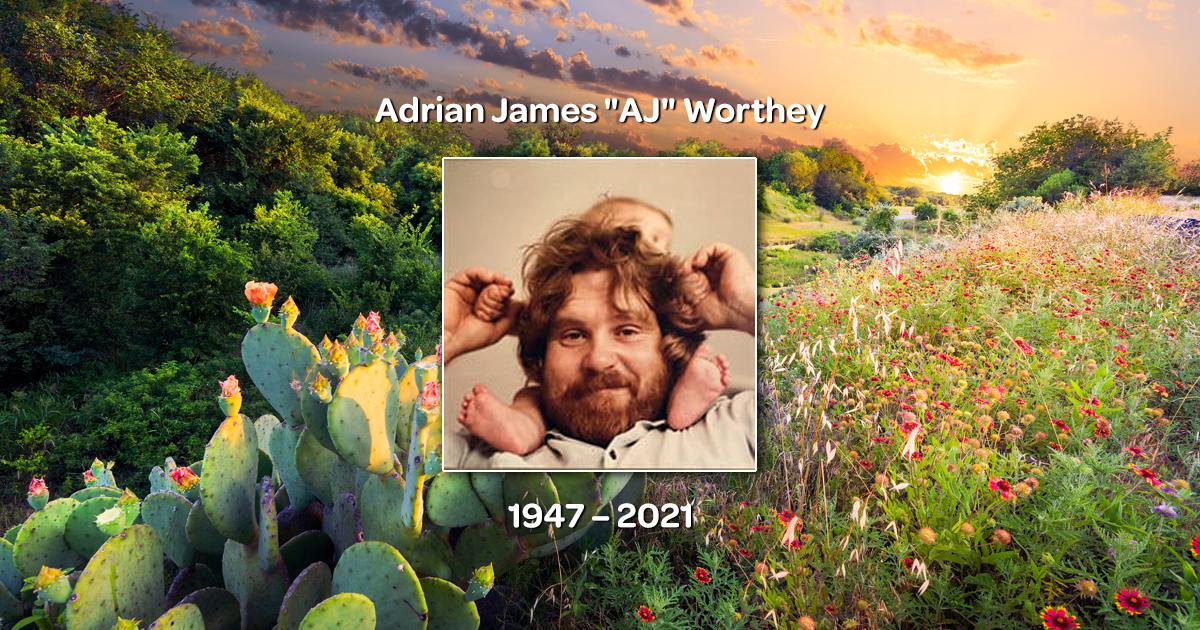 AJ loved all animals, especially dogs. He got his first dog, Buttons, at the age of three, and from then on always had a dog by his side. As a child, AJ enjoyed visiting his grandparents, Grammy Ruby and Grampy Oscar at their dairy farm in Brady, Texas. As a young man, AJ loved cycling, hiking, rock climbing, and spending time in places like Big Bend and Enchanted Rock. He was a good shot with a bow and arrow, as well as a gun. He was a member of the Cactus and Succulent Society of San Antonio, and was a first place recipient in several categories at cactus shows. AJ was very knowledgeable in landscaping and carried on his father's company, Landscape Gardeners. He also kept bees and harvested their honey. AJ was active in the Green Party of Texas. He loved to play cards, especially spades, hearts, and poker. He read widely about history, and was knowledgeable about many eras, cultures, and countries.

In addition to his parents, AJ is preceded in death by his sister, Laurin Lea Worthey. He is survived by his son, Matthew Worthey, and Matthew's mother, Regina Worthey.

On the Johnson side of the family, he is preceded in death by his uncles Herbert, James, and Jarvis; aunts Bernice, Dorothy, and Annie; and cousins Brenda, David, and Barbara; and he is survived by his aunt Carol and his cousins Tina, Jennifer, Denise, Judy, and Danny. On the Worthey side, he is preceded by his uncles Raymond, Fred, James, and Starlin and aunts Lilly, Viola, Odessa, Martha and Gertie, and survived by cousins Danny, Neal, Donald, Steve, Brenda, Mike, Lisa, Craig, Jamie, Jean, Bruce, Joyce, Hartley, and Mimi, and countless other loving family members and friends.

Visitation will begin at 1:00 followed by the Service at 2:00 on Sunday, December 12th at Mission Park Funeral Chapels North, 3401 Cherry Ridge Drive, San Antonio, TX 78230. Following the service, please join us to remember AJ at Matthew's house. Food will be provided.

Interment will be at a later date at the East Sweden Cemetery in Brady, Texas.