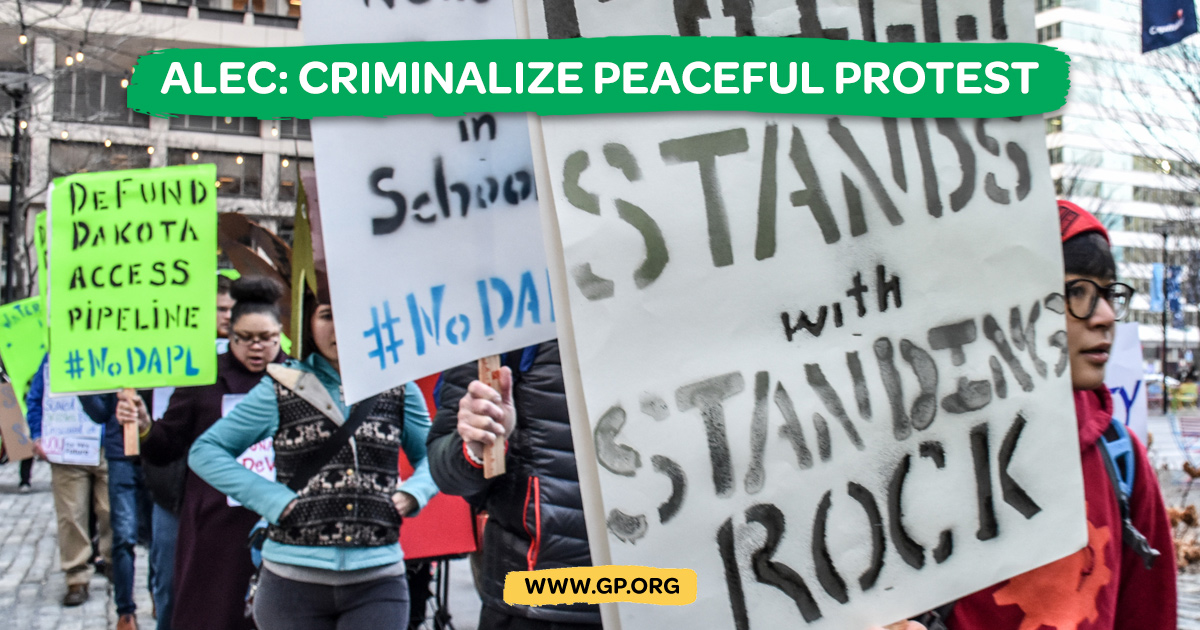 The Green Party of the United States calls for vigorous opposition to the legislative assault perpetrated by the American Legislative Exchange Council (ALEC) on the First Amendment's guarantee of free speech and assembly and on our natural environment.

In the wake of the Standing Rock/Keystone XL protests, ALEC is promoting a 'model bill' in state legislatures that would criminalize groups who "conspire to trespass" on infrastructure sites in order to protest irresponsible environmentally-damaging projects such as petroleum pipelines. ALEC's model bill threatens each of the four principles represented by the Green Party: ecology, social justice, democracy, and peace.

The Louisiana House of Representatives adopted its version of the legislation, House Bill 727, on April 12 by a vote of 95-3. It is now pending before the state Senate. Similar legislation is now under debate in Minnesota and other states. The vague language of the model bill leaves governments much leeway to ban protests and arrest protesters anywhere by simply declaring an area to contain "critical infrastructure." Louisiana's version does not even require a protest action to create any kind of disturbance in order to fall under this bill's shadow.

"HB 727 has been written by the Louisiana Oil & Gas Association in response to local resistance against the continued expansion of the fossil fuel industry in Louisiana, specifically the Bayou Bridge Pipeline," said Renate Heurich, Green Party of Louisana Member. "Clean air, water and soil and a livable climate need to be considered critical infrastructure, not a private pipeline," she said.

ALEC is a well-funded corporate "bill mill" organization that is specifically committed to coordinating thousands of state legislators across the nation with teams of lawyers and corporate executives. The goal: to pass regressive pro-big business and other anti-voter and anti-labor model legislation across the country.

The Green Party of the United States:

To learn more about ALEC and its efforts, go to https://www.prwatch.org/topics/alec-exposed.