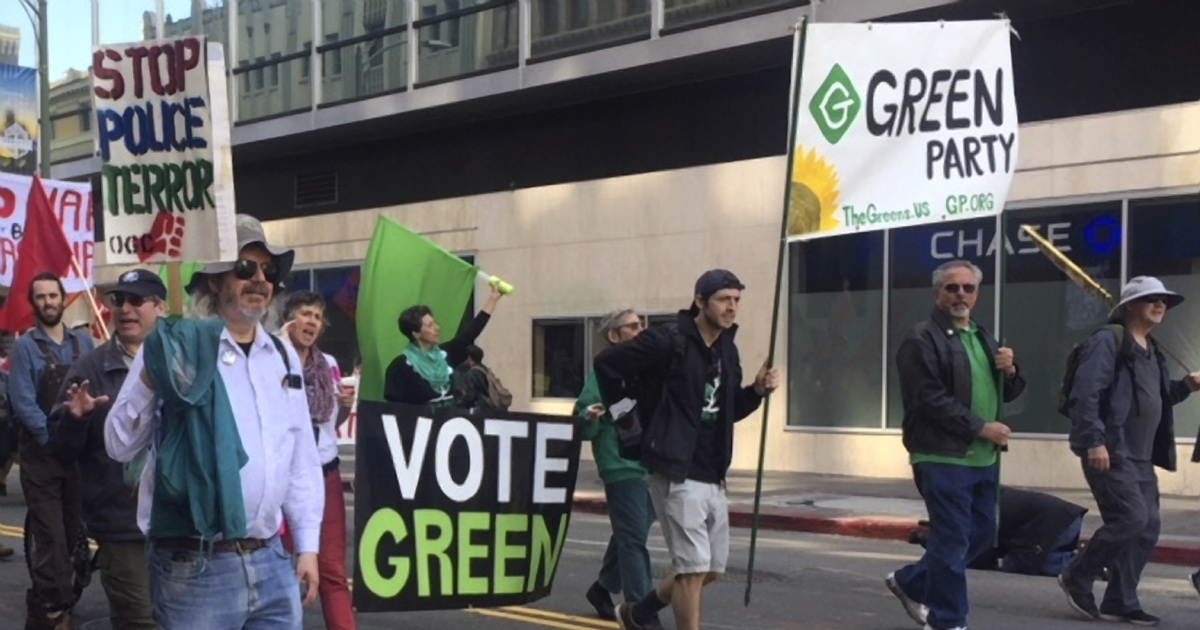 Greens participated in anti-war actions around the country on Saturday, April 14th.

In Oakland, The Green Party of Alameda County, as well as Greens from surrounding counties, marched from Lake Merritt to Oakland City Hall (aka Oscar Grant Plaza) on Sunday with beautiful banners & signs. They also tabled at the rally with a canopy, on top of which were attached banners for greater visibility.

Greens participated in actions in Washington, DC and Baltimore. Kevin Zeese and Margaret Flowers spoke at the Washington rally and teach-in.

Although weather conditions were very cold & windy in New York City, a hearty group between 700-1000 strong rallied took part in a very spirited march to Trump Tower. This followed the previous day’s teach-in at a sunny park in Greenwich, CT across from expensive stores for hedge fund heavyweights. The Green Party was represented at both, particularly in NYC. A Green Party table was in place during the rally with banners and a specific anti-war piece of literature designed for the event was distributed.

Ajamu Baraka spoke on behalf of the Black Alliance for Peace and Gloria Mattera addressed the crowd in her role as a national Green Party spokesperson. A number of Green candidates participated including Adrienne Craig-Williams.

Greens also marched against war in Denver and North Carolina. 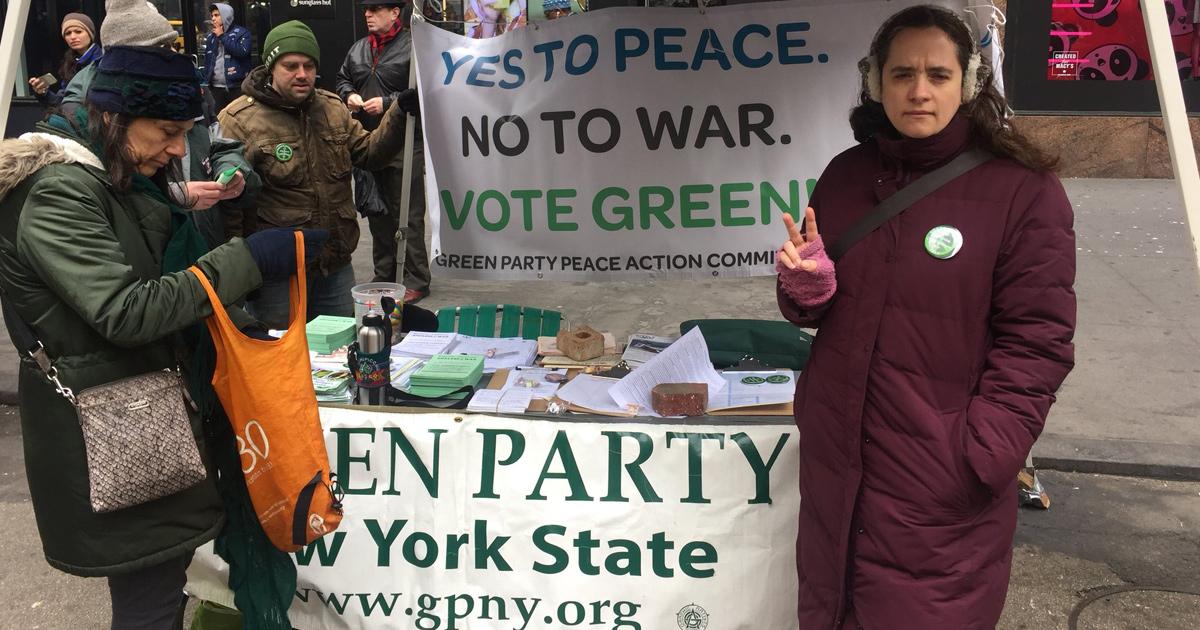 It was good to be part of the over 1,000 demonstrators who rallied on April 15 at Herald Square, NYC on a cold, damp day. This action which was part of a national day of actions against war called by a new coalition of groups called Spring Actions 2018 breaking the media silence on opposition to the warmakers illegal military interventions in countries across the globe. Thousands of shoppers and passers-by in front of Macy's heard an impressive list of speakers from almost 40 organizations represented countries and struggles targeted by US interventions along with social justice, union, community, youth and antiwar organizations. Several groups of drummers, including Indigenous drummers and Korean drummers helped keep the rally moving. A very spirited rally opposing US wars at home and abroad energized the crowd and on-lookers who stopped to listen. The Brooklyn Green Party had organized a tented booth with literature and sign up sheets and enjoyed a brisk business throughout the rally and was joined by other chapters for a Green Party contingent in the march to Trump 'Tower..

After the rally approximately 300 hundred demonstrators marched to Trump Tower in the freezing cold. The march was led by Syrian, Yemeni, Palestinian, Korean and Puerto Rican activists and contingents with their flags, drums and signs. The international character and diversity of the crowd indicated the widespread opposition to the illegal wars that the US is waging around the world. NPR covered the march and rally favorably on its broadcasts throughout the day. The NYC action was just one of many demonstrations in Oakland, Minneapolis, Chicago, Atlanta and others all across the country.