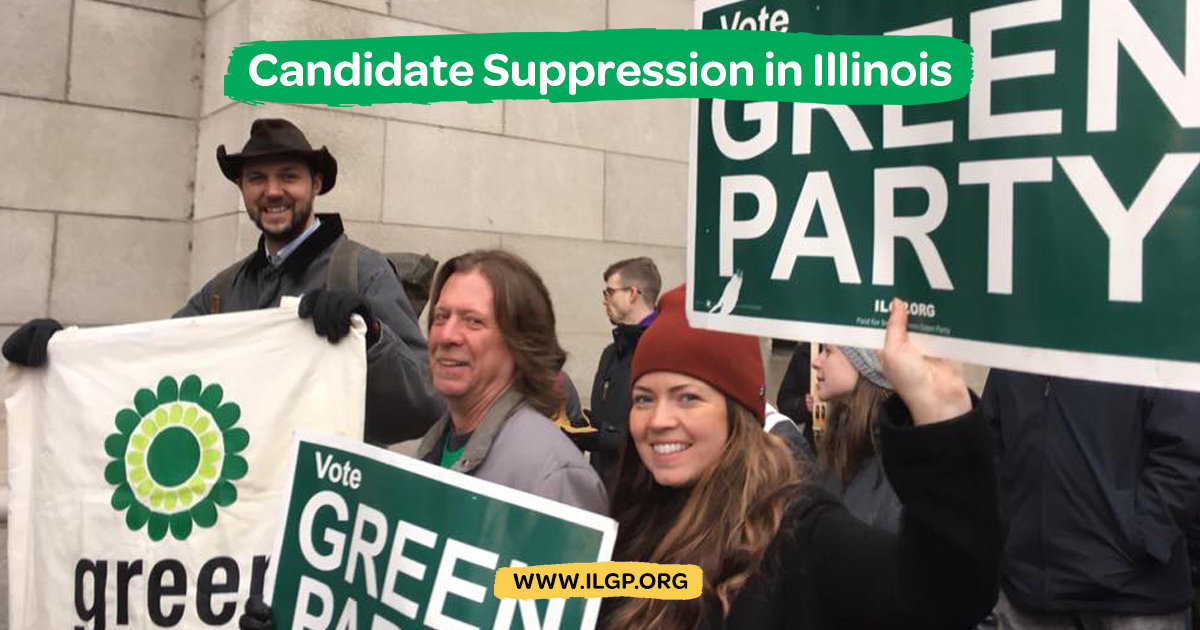 As the votes from the 2018 primary elections are being finalized, the Illinois Green Party is complaining about the challenges third party political groups often face.

The Illinois Green Party criticized the conduct of Cook County poll workers during the primary after receiving reports that voters were not given Green Party ballots when requested. Green Party voters were instead told to choose between a Democrat or Republican ballot in at least nine of suburban Cook County townships, according to a March 20 press release from the party.

The Green Party—a grassroots third party political group that promotes environmentalism, social justice and gender equality—already struggles just to get its name on ballots. Illinois Green Party officials called the problem "a flagrant disenfranchisement of voters" in the press release.

But Cook County's responsibility for allowing a problem in ballot access for alternative political parties is a complicated issue predating Election Day.

Geoffrey Cubbage, a write-in candidate for Metropolitan Water Reclamation District commissioner, a major Chicago taxpayer agency with an annual budget of about $1.2 billion, said he was the only Green Party candidate in Cook County. The Metropolitan Water Reclamation District is an independent agency of state government that manages public water safety with an elected board of nine commissioners.

Five of the nine commissioner positions in MWRD are vacant this year. Cubbage, who is also secretary for the Illinois Green Party, said he filed for the race at the last minute at the Cook County Clerk's office, vying for the seat that opened after commissioner Tim Bradford died in December 2017.

Cubbage and Democrats running for the position sued Chicago because the Board of Election Commissioners refused to put write-in candidates on city ballots, claiming the candidates needed to file a ballot petition with the city in addition to Cook County.

As a result, Cubbage was only listed on suburban Cook County ballots. His time to campaign was wasted working on the lawsuit, Cubbage said.

"The Cook County Board of Election Commissioners are historically a body that has acted to keep candidates off the ballot rather than enabling candidates to be on the ballot," Cubbage said. "I'm certainly not the first candidate to have that experience."

So when calls started coming in on Election Day that suburban voters did not have access to the Green Party ballots, Cubbage called the Cook County Clerk to question whether poll workers were properly trained. The Illinois Green Party received 19 different voter complaints, but Cubbage believes the problem was more widespread.

"It doesn't matter much whether it was a deliberate conspiracy to suppress the vote, or simply a failure of training, the effect is the same: When voters [went] to the polls, they were told they didn't have the option to vote green when indeed they did," Cubbage said. "I don't think you have to believe that the Cook County Clerk office was intently malicious to still say this was a failure in training, a problem that they should've been ready for."

The misunderstanding could be attributed to a lack of physical Green Party ballots at the polls. Voting for the Green Party could only be completed electronically. But that was nothing new since the county has been voting electronically for years on non-partisan, Green and Libertarian ballots, according to James Scalzitti, deputy communications director for Cook County Clerk's office.

Cubbage also sent an email on behalf of the Illinois Green Party March 20 to report the problems, but never received a response from the Cook County Clerk's office.

Scalzitti said the issue was not a lack of employees or due to improper training.

According to a March 28 emailed statement to The Chronicle from Scalzitti, there were two instances in which voters who wanted a Green Party ballot on Election Day did not get one, and there were errors made by election judges in Thornton and Palatine.

In one of the two instances, an election judge who called the help center to ask whether there was a Green Party ballot was given told there was not, according to the emailed statement.

"We sincerely regret both occurrences," Scalzitti said. "[The Clerk's Office] contacted election judges ... to be sure they were giving out the Green ballot. We had no further incidents reported to our office the rest of election day."

Alhough the problem seemed to be a misunderstanding among poll workers, the Cook County Clerk's Office and the Illinois Green Party, it affected the election and possibility of showing up on the November elections ballot, Cubbage said, adding that the party is unsure whether it will pursue litigation.

Dick Simpson, a political science professor at the University of Illinois at Chicago and former alderman of the 44th Ward, said the political system is "rigged" to favor the two major parties.

"Third party candidates have not won any elections in Cook County in living memory," he said. "A party cannot get traction if they can't at least win at least a few offices and have a public spokesman for their party position."

In order to become an official recognized party, third parties often have to receive an unfair amount of signatures just to petition for ballot access, said Scott McLarty, communications director of the national Green Party.

The larger problem, McLarty said, is the people who are tired of "two-party racket" and decide not to vote at all.