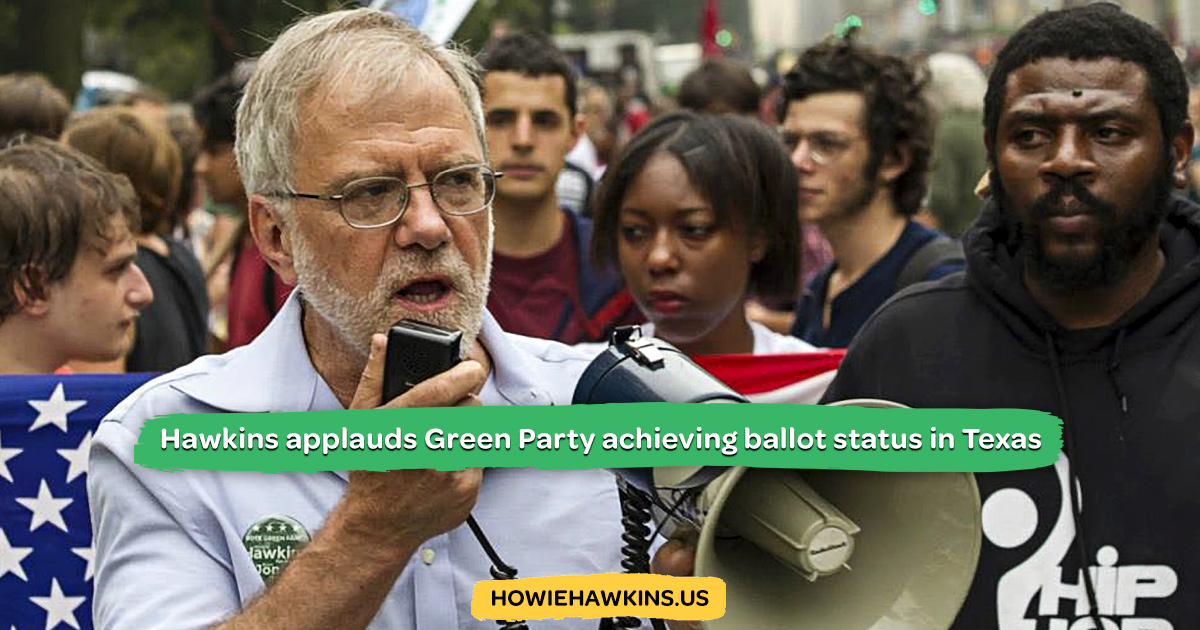 The Howie Hawkins Campaign, which is seeking the Green Party nomination for president, applauded the Green Party of Texas for achieving ballot status. Governor Greg Abbott signed HB-2504 which gave the Green Party ballot access because Martina Salinas achieved more than 2% of the statewide vote total in her 2016 race for Railroad Commissioner.

Howie Hawkins said, "We plan to be on the ballot in all 50 states, and the District of Columbia in the 2020 election. Texas is a critical state where it would have been very difficult to achieve ballot status under the old law. We salute Matina Salinas, who ran to represent the rights of Texas citizens over the rights of corporate special interests, and we celebrate with GPTX. Making it difficult for parties and candidates to be on the ballot is one of the ways that democracy is undermined in the United States. The US has the most difficult ballot access laws of any electoral democracy in the world."

The Green Party is currently on the ballot in 21 states, including the District of Columbia. In most of the 30 states where Greens are not on the ballot, state law does not allow the campaign or party to begin petitioning yet. There are nine states where Greens and the Hawkins Campaign can organize now for ballot access. These include Arizona, Georgia, Indiana, Kansas, Maryland, Montana, Nebraska, South Dakota, and Vermont.

Hawkins is running a campaign that has put forward a broad set of policies for economic, racial and environmental justice as well as peace. The campaign is built around an Ecosocialist Green New Deal featuring an Economic Bill of Rights and a Green Economy Reconstruction Program that will provide good jobs and economic security for all while achieving 100% clean renewable energy and zero greenhouse gas emissions by 2030 to address the climate crisis.

The campaign also seeks to use the presidential campaign to build the Green Party into a viable party that elects thousands of people in elected positions including local, statewide and federal offices. There are currently more than 150 Greens holding elected office.