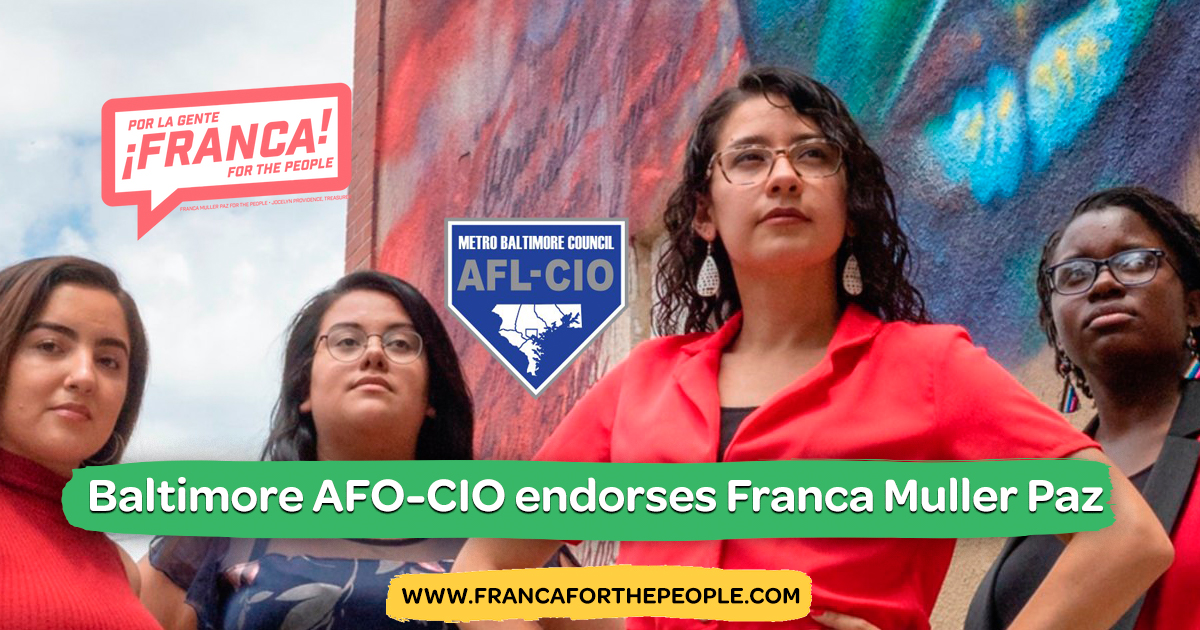 BALTIMORE – Franca Muller Paz is building a powerful 12th District City Council campaign in Baltimore City, picking up the historic endorsement of the largest labor union council in Maryland, representing over 150,000 workers across the Baltimore region. In a vote tallied on 9/17, the Metro Baltimore Council AFL-CIO Unions approved the endorsement of Muller Paz’s surging campaign.

The vote significantly surpassed the 2/3rds threshold required for approval, garnering 85% in favor of endorsing Muller Paz. This is the first time the Metropolitan Baltimore Council of AFL-CIO Unions has endorsed a 3rd party challenger. This caps off a streak of endorsements over the last several weeks, demonstrating not only her momentum, but the viability of Franca’s growing grassroots coalition to win November 3rd against an incumbent Democrat.

The campaign’s people-powered fundraising effort has now rocketed to over $70,000 in donations, raising a daily average of over $1,000 since their launch on July 19th and amassing 1083 individual donors.

Muller Paz says: “As an elected Baltimore Teacher Union Building Representative, I have fought for my union’s members to have a voice from North Avenue to Annapolis and defended the rights of the students and families we serve.

I am honored to stand with the support of my fellow union brothers and sisters in the fight for Baltimore’s working families. If our city is serious about challenging systemic racism that has denied wealth to our Black community, it starts with making sure working people earn the wages and benefits we all deserve.”

Diamonté Brown, President of the Baltimore Teachers Union said in response to this endorsement: “Franca has been a leader in the Baltimore Teachers Union for many years. She’s a trusted colleague at City College who staff turn to in moments of challenge and creative possibility. She has taught and mentored many of Baltimore’s next generation of young organizers and has run an unprecedented campaign connecting with voters through music, community events, and real policies that would make a material difference in their lives. It is rare to have someone who understands issues of structural racism and classism from a personal and academic level and I think she would be a game changer in the Baltimore City Council.”