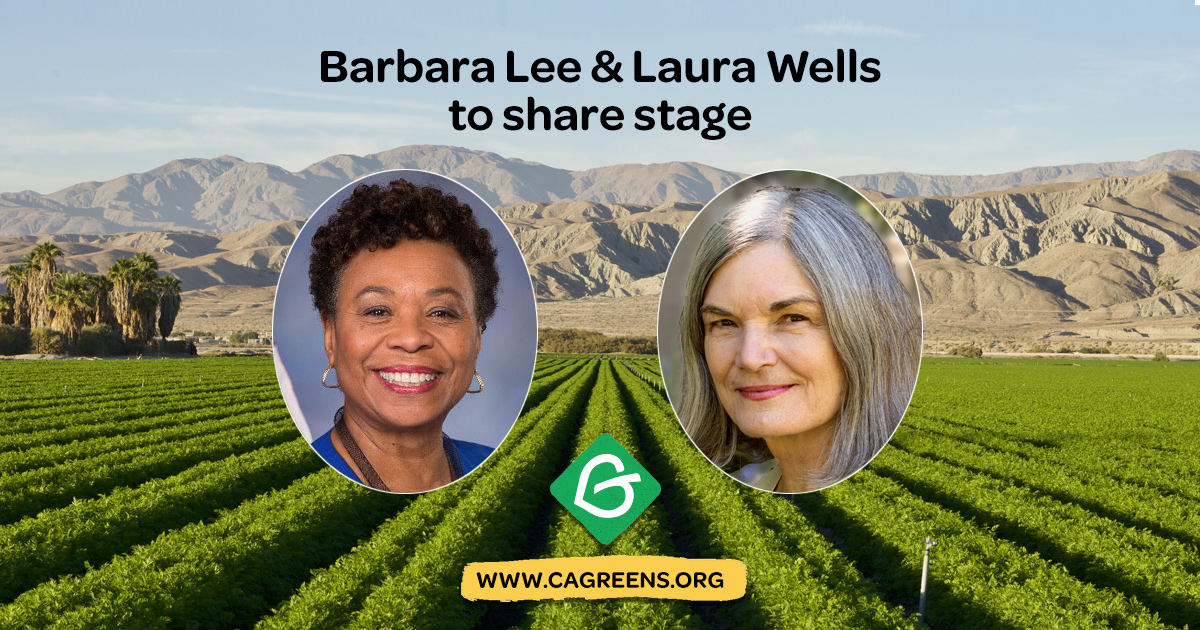 Oakland, CA – In a move that surprised many, Democrat incumbent and U.S. Representative Barbara Lee will join in a public candidate forum with Laura Wells, the Green Party challenger for her District 13 House seat in the November 2018 General Election. The Green Party announced in June that due to a successful primary write-in campaign by Wells, three Green candidates are contesting U.S. House seats currently held by Democrats in California, including two candidates in Los Angeles, Rodolfo Cortes Barragan and Kenneth Mejia.

The District 13 candidate forum will be moderated by the League of Women Voters on Friday, October 5, from 8:30 to 9:00 PM, at Oakland City Hall, directly following a forum for Oakland Mayoral candidates.

Upon learning that Lee had agreed to join in the forum Wells noted how important she considers the event to be for the electoral process.

“After the grim experience of the 2016 primaries and general election, for a Green and a Democrat to appear together as candidates to dialog with the public is a powerful change that greatly elevates the integrity of our electoral process. This is an opportunity for two progressives to discuss real issues facing people’s lives and the environment, and to accept the challenge of establishing how we can best steer the nation back on course, to a far better future than the one it faces now.”

“This is a much more democratic process than eight years ago when I was running for Governor of California. I was arrested and put in hand cuffs for just trying to be in the audience of a debate in which I rightly should have been one of the candidates on the stage. So this is an important change.”

“I want to thank Barbara Lee for agreeing join with me in this forum, and acknowledge her good stands, such as her vote as the sole congressperson to oppose giving George W. Bush power to wage unlimited “War Against Terror”. However I also want us to have a real and in-depth conversation about how the country got into the mess we are in right now, and how we are going to end the corporate control of elections that played such a big role in this crisis of democracy. We need to get political parties out from under the influence of corporations, so we can start talking about and achieving real progress like expanded and improved Medicare for All, rent control, and taking our country back from the Wall Street banks, to return it to the 99%. This forum is a key step in that direction.”

Green Los Angeles District 34 House candidate Kenneth Mejia said of the event, “Wow! Here in my district election we can’t even get the incumbent to respond at all to our request that he join in a candidate forum or debate. Kudos to Laura Wells and Barbara Lee for changing the game!”

Rodolfo Cortes Barragan, Green Los Angeles District 40 House candidate was even more pointed. “To date my incumbent opponent has refused to even acknowledge that our challenge to her seat exists, let alone to join us in a forum! To my knowledge, my opponent has never debated anyone while running for her seat, in all of the decades that she has held it. I sincerely hope the example that Laura Wells and Barbara Lee are setting will change that.”