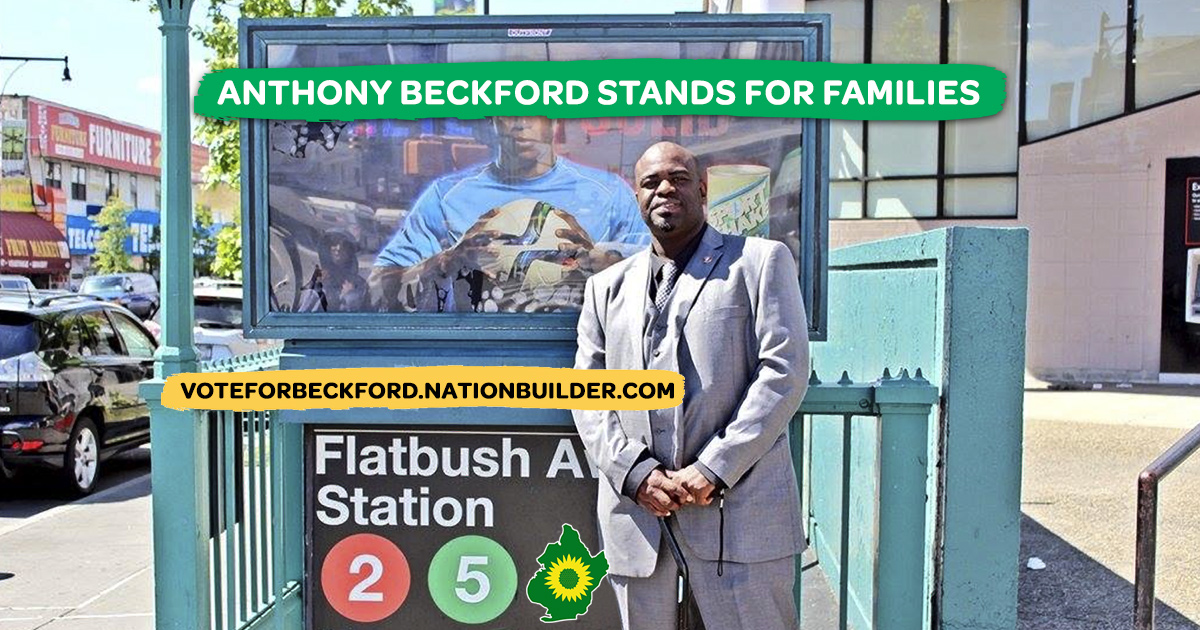 State Assembly Candidate Anthony Beckford's Statement on the Inhumane and Racist Immigration Policy of Separating Children from their families by the Trump Administration.

(Monday, Brooklyn, NY) Let me start of by stating first, my sincerest apologies to the families and to the children for them having to go through this traumatic experience.

Secondly, I would like to express my absolute anger with Donald J. Trump and his disgustingly racist administration for creating these inhumane policies. I am a Father. I am a Single Parent. I am the son of Jamaican Immigrants. My people have been experiencing separation from our children since the days of slavery and even currently due to systemic racism that is carried out via various agencies in our cities for low level offenses to just outright targeting of our communities.

I know the pain too well. Unlike, many others who have stayed quiet to see which way the tides will turn, I have been on the frontlines of the fight to protect TPS recipients, DACA recipients and everyone else in our Immigrant communities. I have been fighting to keep ICE from kidnapping and deporting mothers, fathers and children. When this inhumane policy was brought to light, I made sure that my voice was heard and helped organize actions against Trump and his administration. I will continue to do so. I am demanding that Donald Trump and his administration reunite all the children who have been separated with their families immediately. I am demanding that there be no detainment of any individuals seeking asylum and a safe space in this country. I demand that for those who have been separated, that they receive mental health care and permanent protection from any deportation. I demand that all TPS and DACA recipients receive permanent residency and that a fast track process be creates to provide citizenship to the immigrants not only in New York City, but around this country.

This administration has clearly shown that it is immoral and unconstitutional. As a U.S. Marine, I took an oath to protect this country and the people within it from enemies foreign and domestic. That means I will protect even the immigrants who come to this country, especially since this country was stolen from the native people of this land, and slaves who were forcefully brought here and immigrants who came here after, have basically built this country while being beaten, oppressed and murdered. This Is America. To make it "Great" is to not repeat the disgusting practices of the past. To make it "Great", racial disparities and white supremacy must be brought to a full stop. It was not great before, but we can make it great by Abolishing ICE, by no longer supporting genocidal regimes, by eradicating all Jim crow era laws that are hidden in the Justice system, by stopping mass incarceration and so many other things. If there is a wall to be built, it needs to be built around Trump and his administration to keep them from being a continuous danger to the people. No Ban on Stolen Land.

Anthony Beckford is a long time community advocate, Activist and a candidate for New York State Assembly in District 42 which consists of Flatbush, East Flatbush, Midwood and Ditmas Park. Anthony Beckford resides in East Flatbush and has been on the frontlines fighting for the people regarding issues such as, immigration, housing, police brutality, gun violence, healthcare, environmental issues and much more. Anthony Beckford is the son of Jamaican immigrants and the Leader of the Brooklyn Sector of Copwatch Patrol Unit, a grassroots group that has been on the forefront of police accountability. He is seeking to be elected in the general election this November 6th, 2018, to stop the displacements and racial disparities in his district and to push as much legislation as possible to answer the demands of the people. He has marched and spoken out against the attacks on our communities along with City Council member Jumaane Williams, State Senator Kevin Parker and many other Key Elected officials as well as advocates and organizations. Anthony Beckford is a member of progressive organizations such as, Our Revolution and Democratic Socialists.