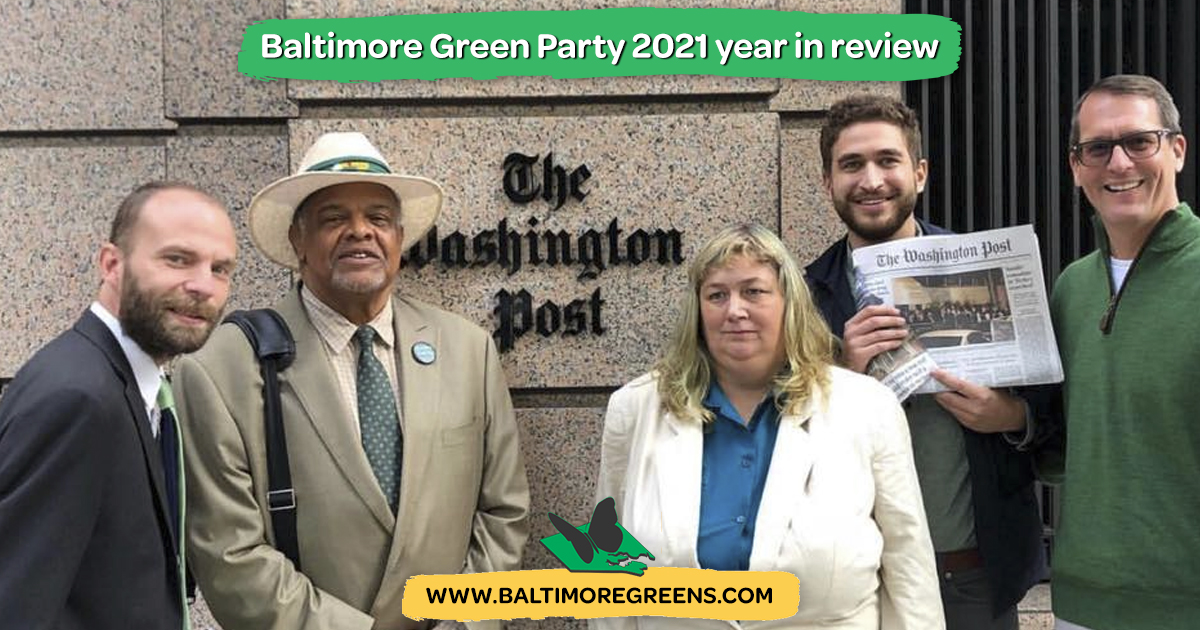 BALTIMORE – Even as COVID-19 (and its variants) continued to cast a dark shadow, a number of Baltimore City Green Party (BGP) members remained dedicated to improving the Baltimore community over the past year. From running in local elections to writing editorials, BGP had a lot to be proud of in 2021. To honor these efforts, we've compiled a list highlighting some of these accomplishments.

Early on in 2021, a number of members helped advance BGP issues by contributing to various publications. Jeremy Collins was quoted in a Baltimore Magazine piece about the violence that occurred at the U.S. Capitol on January 6, 2021.

“We should expect people [on the right] to be further radicalized by this,” Collins said. “The conditions are ripe. People are taught not to trust the government and media. Today sets a precedent and it should set off an alarm.”

In February, Brittany Johnstone contributed to an article about Maryland lawmakers pushing to replace school police with counselors. Johnstone pointed out that "the Baltimore City Schools Police Force regularly overspends its budget 'by millions of dollars,' while Baltimore City Public Schools regularly 'under-spends their budget for social-emotional learning.'”

Ashley Esposito responded, with an opinion piece in the Baltimore Sun, to Sen. Ed Reilly’s call, in Senate Joint Resolution 5, to add menstrual tracking to the Maryland State Board of Education's health curriculum. "Unfortunately, politics does influence medicine, often in defiance of science-guided practices," said Esposito. "Highly trained and qualified doctors are often challenged by ill-informed people like Senator Reilly who should stay out of the business of women’s health." Esposito added, "It is always extremely alarming when legislators become overly concerned with the vaginas of adolescent girls. I think we should all be outraged that this state senator had the audacity to submit it at all."

A Maryland Matters article about removing clean energy subsidies for trash incinerators quoted Owen Silverman Andrews, co-chair of the Baltimore City Green Party, who suggested that Democrats were hesitant to act on an amendment to "downgrade fuel produced from trash as a clean energy source" because of special interest campaign cash they’ve received.

“What’s important to understand about what went down on the state Senate floor [last week] is that every Democrat who spoke out against this amendment has received significant donations from Covanta, which operates the trash incinerator in Montgomery County and a larger one in Northern Virginia, and/or Wheelabrator, the operator of the Baltimore City trash incinerator.” You can also read Owen's full piece on Medium that this Maryland Matter article references.

A March Johns Hopkins News-Letter quote Andrew Eneim, a member of the Coalition Against Policing by Hopkins (CAPH), in its article about legislation that would have repealed a 2019 law that approves the establishment of a Johns Hopkins Police Department. Eneim explained that SB0276, a bill introduced by Sen. Jill Carter, was being unfairly barred from a hearing by members of the Senate.

Owen Silverman Andrews and Andrew Eneim contributed to a Baltimore Business Journal article on the 4 key areas intersecting with racial justice that should be addressed to create conditions for Baltimore to successfully host the 2026 World Cup. Those 4 areas are:

"We must be intentional about ensuring the revenue taken in by the city is not restricted to gentrified neighborhoods like Fells Point, Federal Hill, and the Inner Harbor," the authors write. "When Baltimore promotes and hosts, it must bring money into the Black Butterfly."

BGP member Bill Barry is referenced in a Baltimore Magazine review of Alec MacGillis’ new book on the Fall of Manufacturing and Rise of Amazon. MacGillis explains how Barry helped introduce him to Amazon workers so he could interview them for the book.

BGP members wrote a variety of articles about healthcare and research over the course of 2021.

Dr. Margaret Flowers, a retired pediatrician and advocate for national improved Medicare for All, authored an op-ed explaining that while the Biden Administration's American Rescue Plan (ARP) "may be used to strengthen some provisions in the Affordable Care Act (ACA), it will not move the United States’s health care system any closer to the popular national improved Medicare for All system that we need. It is more likely to enrich private health insurers and delay broader healthcare reform."

In June, Dr. Drew Pate was quoted in a Baltimore Sun article about the need for psychiatric beds in Maryland remaining high after the peak of the coronavirus pandemic. Dr. Pate, chief of psychiatry at LifeBridge Health, pointed out that his medical system was seeing a "steady numbers of patients seeking psychiatric care" with many of them being new patients.

According to the article, "Pate said the occupancy rates at state and private centers typically fluctuate over time, with some periods busier or quieter than others. But the coronavirus pandemic highlighted the lack of funding directed to behavioral and public health services."

The American Journal of Respiratory and Critical Care Medicine published a study co-authored by Karina Romero. Her research shows the potential health benefits of portable HEPA air cleaners for former smokers with COPD, particularly among those with greater adherence and spending a greater time indoors.

And Mairin Srygley published her thesis titled, "Training Speech-Language Pathology Graduate Students in Anti-Racist Praxis,” which explores how to measure the impact of teaching anti-racism to speech-language pathology (SLP) to graduate students and how it can lead to knowledge, skills, and attitudinal change.

"Ultimately, this paper proposes a change in the field of SLP," Srygley writes, "urging SLPs to no longer engage in a professional culture of silence but rather to engage in critical awareness of the racial dynamics of society that affect SLP clinicians and clients every day."

Dr. Gideon Singer, a Digital Garbologist at the Baltimore Solid Waste Bureau, helped create an interactive story map that "paints a picture of our current recycling habits, explores DPW's plan for equitably distributing recycling carts this summer, and shows how DPW will keep track of any changes made to recycling services."

"We believe that this dashboard will help us to ensure that City services and resources, such as residential recycling, are being distributed equitably and efficiently across the City of Baltimore," Dr. Singer wrote.

Vince Tola wrote a letter to the editor of the Washington Post suggesting that because the U.S. has had a large role in destabilizing Central America over the years, it "should quickly create safe, legal avenues to allow families asylum in our nation," he said.

"We can and must reduce desperation and human suffering," Tola said, "It’s not only the right thing to do; it’s for the long-term benefit of everyone involved."

“We the people of Baltimore welcome Haitian people to our city,” was the unified message of the rally.

And, Sammy Alqasem was a panelist for “No Walls, No Borders, No Bans”, a benefit exhibit of photography and art, featuring the work of Baltimore-based activists connecting ideas of the violence of capitalism, colonialism, and the racist/fascist state both locally here in Baltimore and globally.

Dr. Marvin Cheatham was featured in the Washington Post for his efforts to bring a skate park to West Baltimore. "For Cheatham, it’s an equity issue in a city where he says mostly Black neighborhoods often have been neglected," the Post wrote. "Skate parks have been in mostly White neighborhoods such as Hampden and Carroll Park in Southwest Baltimore."

Franca Muller Paz, who ran a competitive race for Baltimore City Council against incumbent Robert Stokes, was listed as one of Baltimore's 25 women to watch by the Baltimore Sun.

“I think she showed folks that it doesn’t have to be inevitable that the establishment can cruise without a challenge,” said Andy Ellis, a Baltimore City Green Party steering committee member. “She opened up a lot of opportunities for herself and a lot of other people.”

And, Andy Ellis and Craig Collins-Young were elected to their local community associations. Ellis  served first  as the Seargent-at-Arms for the Waltherson Improvement Association Board and then was elected as first Vice President in November and Collins-Young will serve as the Secretary for the CARE Community Association in 2022.