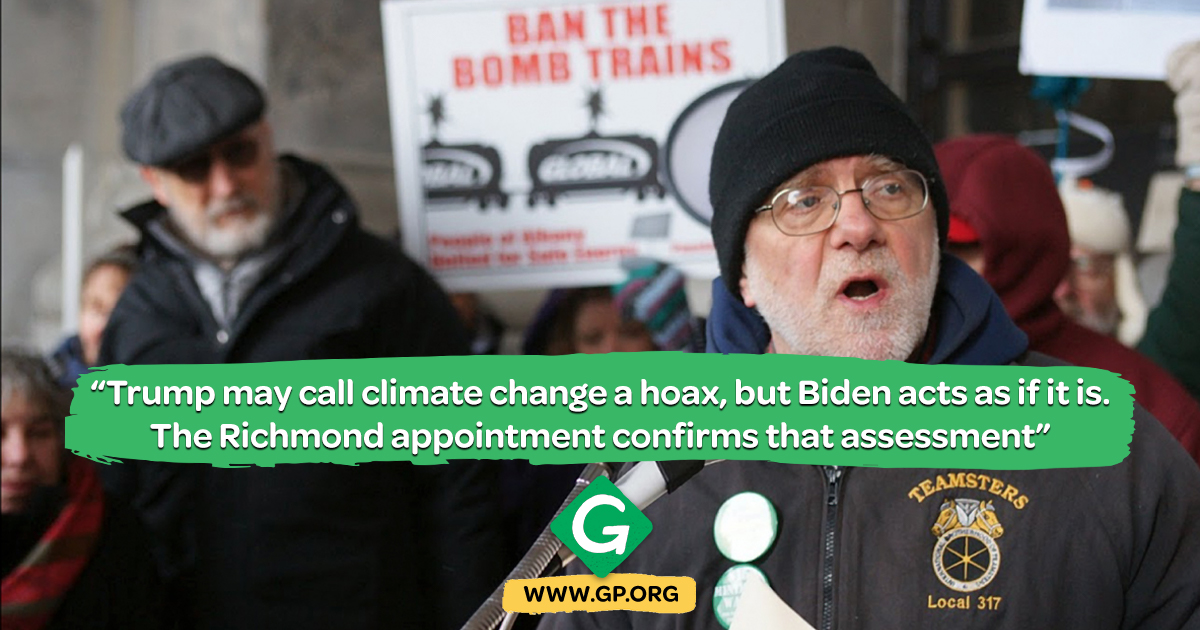 Richmond has represented Louisiana's second district, which tracks the oil refineries and plastics factories of Louisiana's notorious Cancer Alley between Baton Rouge and New Orleans. He received the fifth highest total of oil and gas industry contributions among House Democrats over his ten years in Congress. He voted to approve the Keystone XL Tar Sands Pipeline.

"Richmond's role will be to pacify the climate movement and minority communities with sweet talk and token grants while the oil and gas industry continues to frack the hell out of the country and the Louisiana refineries and plastics factories continue to poison workers and residents in his congressional district."

The US Energy Information Administration projects that US oil and gas production will increase 30% by 2030 above 2018 levels.

Hawkins said that Biden's climate platform offered little to counter that projection. Biden's climate program calls for a 10-year $1.7 trillion public investment in indirect support for expanding renewable energy, with a primary emphasis on tax credits for renewable power production and research and development funding for new technologies like carbon capture and sequestration, which is a way to continue using fracked gas for power.

"A serious climate action plan must be laser-focused on rapidly cutting carbon emissions, not only to expanding clean energy production. Cutting carbon emissions starts with a ban on fracking and a halt to new fossil fuel infrastructure like gas and oil pipelines and gas-fired power plants. If we build new fossil fuel infrastructure, we will be locked into fossil fuel burning for decades and a climate disaster," Hawkins said.

By contrast, Hawkins' budget for an Ecosocialist Green New Deal is a 10-year, $27.5 trillion dollar investment in direct public employment and production in all sectors, including transportation, buildings, manufacturing, and agriculture as well as power. It is a plan to transform the entire economy to 100% clean energy and zero-to-negative carbon emissions by 2030. The budget projects the creation of 30.5 million new jobs to make the energy transition.

"We cannot win the fight against dangerous climate change without public enterprise and planning to drive and coordinate the rapid reconstruction of our economy around clean energy and production. I have been saying that Trump may call climate change a hoax, but Biden acts as if it is a hoax. The Richmond appointment confirms that assessment," Hawkins said.

Hawkins reiterated his call for the next president to declare a climate emergency and use it take a number of immediate actions to protect the climate that do not require congressional approval.