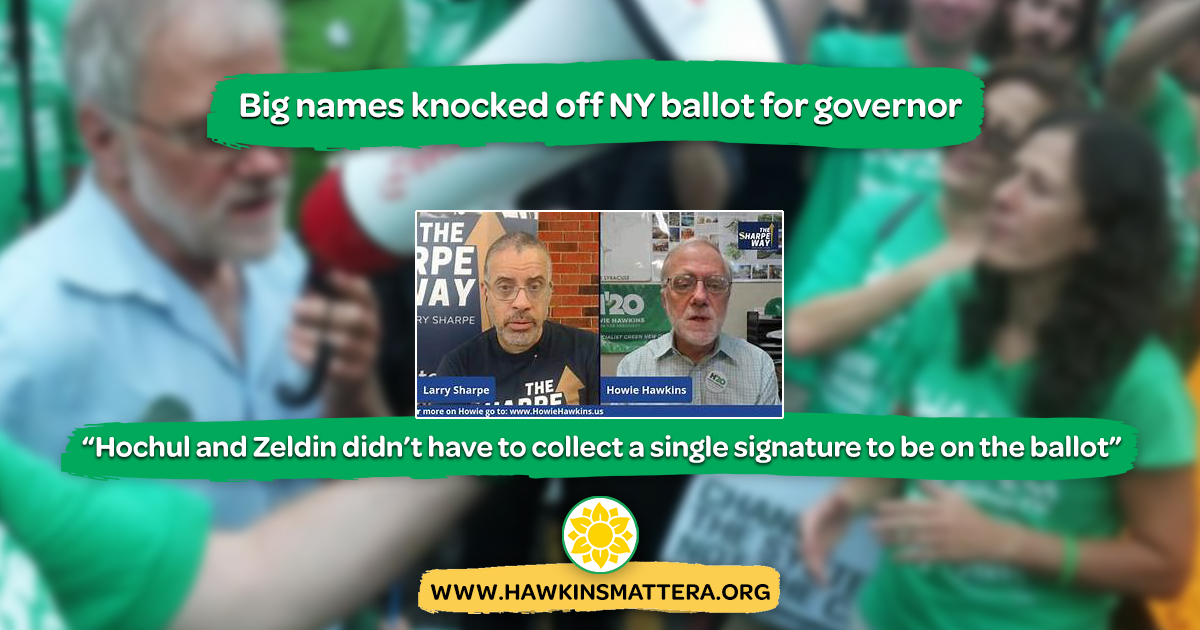 The NY Board of Elections has ruled that petitions filed by all of the minor political parties to get candidates on the ballot in November were invalid and failed to meet the very high threshhold of 45,000 valid sigatures statewide.

“The Democrats’ goal in their ballot access exclusion law of 2020 was to eliminate competition from alternative parties. If we don’t win our pending case in court against this law, the Democrats will have achieved their party suppression goals for this year’s election,” said Howie Hawkins, the Green nominee for Governor.

“Democrat Kathy Hochul and Republican Lee Zeldin didn’t have to collect a single signature to be on the ballot,” noted Gloria Mattera, the Green candidate for Lt. Governor. “The Democrats changed the Election Law so the Greens had to get three times as many signatures as before just to get back on the ballot. None of the independent candidates were able to meet that signature threshold. That demonstrates that the new ballot access law is exclusionary. It must be changed if New York is to be an inclusive multi-party democracy.”

“New York is now effectively a one-party dictatorship. The Democrats hold the governorship and super-majorities in both chambers of the legislature. The new ballot access restrictions combined with single-member-district winner-take-all elections means one-party rule when Republican enrollment is less than half of Democratic enrollment. Whether we are on the ballot or not, the Green Party will continue to fight for a fair ballot access law as well as ranked choice voting, including proportional ranked choice voting for the state legislature, in order give all parties their fair and proportional share of power in state government,” Hawkins said.

As of July 1, the Green Party and the Libertarian Party Sued the New York State Board of Elections to get on the ballot. No decision yet has been made public.

After losing the GOP Primary on June 28, Wilson tweeted that he intended to support the republican nominee for Governor. Congressman Lee Zeldin.

Mark Weiner, for Syracuse.com, wrote one of the few stories highlighting the fact that all New Yorkers will see on the ballot for Governor when they go to the polls in November is Kathy Hochul and Lee Zeldin, running on the Democratic, Working Families parties for Hochul, and Republican and Conservative Party lines for Zeldin.

“The election for New York’s governor will have only two candidates on the ballot this fall for the first time in at least 80 years after seven candidates failed to qualify on third-party lines,” writes Weiner, who wrote that if court challenges made against the BOE ruling are unsuccessful, “it will end a streak dating to at least 1942 where New Yorkers had at least three or more candidates to choose from in elections for governor….New York’s colorful history of third-party candidates for governor dates back to the 1800s and has included nominees from the American Labor, Communist, Socialist Workers, Right-to-Life and Liberal parties. In 2018, former Syracuse mayor Stephanie Miner was among five candidates for governor who appeared on the ballot after she helped establish a new political party – the Serve America Movement, or SAM….In the 1998 election for governor, the Green Party nominee was Al Lewis, the actor best known for playing “Grandpa” in the television sitcom, “The Munsters, writes Weiner, https://www.syracuse.com/politics/2022/07/ny-governors-race-will-have-only-2-candidates-for-first-time-in-decades.html&subscribed=auth0%7C62c6046fc9d29c77866a9c58

Luke Parsnow, from NYStateofpolitics.com, wrote on July 6 that the Working Families Party, “filed to put Gov. Kathy Hochul and Lt. Gov. Antonio Delgado on their ballot line in the general election race for New York governor. The progressive political party had supported Jumaane Williams and Ana Maria Archila in their primary campaigns for the Democratic nominations for governor and lieutenant governor, respectively.” https://nystateofpolitics.com/state-of-politics/new-york/politics/2022/07/07/working-families-party-file-to-put-hochul–delgado-on-their-ballot-line

“Following last week’s Democratic Primary, Jumaane Williams and Ana María Archila declined their designations for the Working Families Party ballot line in the General Election. Our State Committee voted to fill those vacancies with Kathy Hochul for Governor and Antonio Delgado for Lieutenant Governor,” wrote the WFP in a statement. “Our party has never played the role of spoiler and has no intentions of doing so this year. We’re committed to ensuring the Republican nominee Lee Zeldin—and all right-wing extremists dead set on stripping us of our freedoms—are soundly defeated on Election Day.”