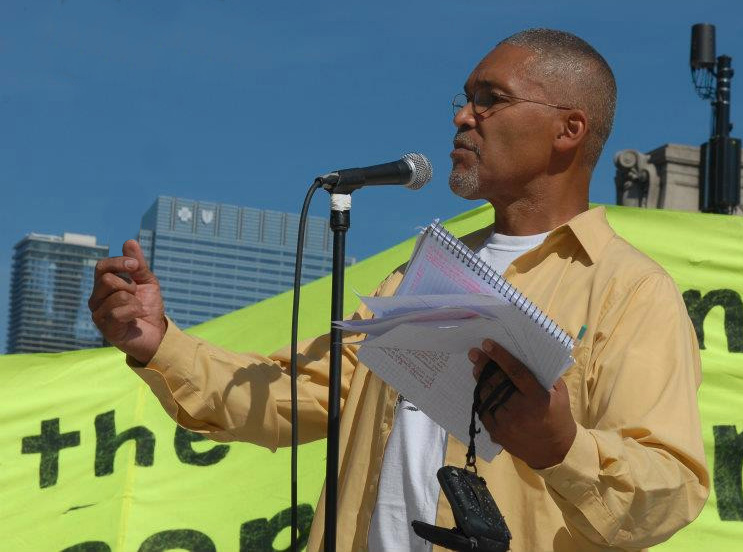 I was born to working class parents, and raised on the south side of Chicago. By 1967 I was involved in the citywide organizing effort among black high school students demanding the first black history courses and opposing the war in Vietnam. In the fall and winter of 1967 we hooked up with young Marine and Army veterans just back from the war. We took them to nine or ten black high schools on the west and south sides of Chicago where we conducted teach-ins at which they recounted stories of rapes, murders and war crimes they either took part in or witnessed but were powerless to stop. They told us we had a political and moral obligation to resist the war and the draft and not allow us to be used in the shameful way they had been used.

In January 1969 I joined the Illinois Chapter of the Black Panther Party, in which I served as part of the education cadre, responsible for conducting the party's political education classes. I also served as a patient advocate in the party's free medical center. I left the BPP about August of 1970.

In 1974-75 Bobby Rush, former Illinois Black Panther Party's Deputy Minister of Defense ran for Democratic ward committeeman in Chicago's 2nd ward. I took part in the campaign, running 5 precincts, canvassing and training others to canvass for about 60 days prior to the election. This was my first brush with electoral work. Bobby is now of course congressman from the first congressional district of Illinois.

During the mid and late 1970s I took part in a series of ephemeral community organizing efforts in the Cabrini-Green public housing project on Chicago's near north side around issues affecting public housing residents including public education, police practices, jobs the corrupt practices of the Chicago Housing Authority and more. In 1979-80 I was part of a group that planned and executed a series of highly visible protests over the fact that Chicago residents could not register to vote except weekday business hours downtown in non-presidential election years. I was arrested a few times, but we embarrassed the city into allowing Chicago's first off-site voter registration drives, and signing up about 60,000 new voters in time for the 1980 Illinois gubernatorial election. From this time until the end of the century I was involved in contesting primary elections every cycle as a volunteer or consultant or staffer or precinct captain or one of the folks who trained precinct captains, always against the Daley Machine.

I was caught in a couple of plant shutdowns in 1978 and 1981, and the second time worked with other rank and file steelworkers to gain control of our union at Chicago's old Pullman passenger rail car plant and mobilize to prevent the shutdown. We seized the local union but were betrayed by our international, and 3,000 of us were put on the street that year. All through the 1980s I worked on campaigns against the Daley Machine in Chicago, including the 1983 and 87 mayoral campaigns of Harold Washington. In 1984 I worked in the congressional campaign of Danny Davis, who now represents the 7th district of Illinois, and the Jesse Jackson presidential campaign that season, and the 1987 Chicago mayoral campaign. I ran field operations for primary election campaigns in 1988 and 1990 in which we decisively beat the Daley Machine. I also recruited and trained the first Local School Improvement Councils for five Chicago Public Schools in the Cabrini Green neighborhood in the 1988-1991 period. I gained a reputation for running successful voter registration drives and field operations against the Daley Machine.

In 1992 I was tapped to be one of three field organizers responsible for the summer and fall voter registration drive leading up to the general election that year. Our director that year whose chief responsibility was fundraising was a guy fresh out of Harvard law with no political experience, but a quick study and a great fundraiser. We took him around to the people we'd organized in our previous 15 years, our union folks, our people in public public housing, in neighborhood organizations and the like. His name was Barack Obama. We signed up 133,000 new voters in four months and chased them out to the polls. Afterward I took a job in the Elections Department of the Cook County Clerk's office responsible for registrations and elections in the suburban half of Cook County, where my responsibilities included training deputy registrars and prospective candidates for local office, writing manuals and some other stuff.

I left Chicago at the end of 2000, and moved to Georgia. In 2002 I took a week off to work in the congressional campaign of Rep. Cynthia McKinney, and afterward published a critical assessment of the effort online. The article attracted the attention of Glen Ford and we began collaborating with Margaret Kimberley to produce an online journal called the Black Commentator, and in 2006 we founded Black Agenda Report, a weekly journal of news, commentary and analysis from the black left published each and every week.

In 2009 I joined the Georgia Green Party. To tell the truth the GA Green Party, like the national party had a lot of problems when I joined it, most of which I have learned are reflected in the experience of Greens in other states as well. Assessing, addressing and overcoming them is more than just a notion, it's been a journey of several years here in GA, but I believe we are in sight of being able to build a party with a mass base here, capable of putting a couple hundred people in a room in Atlanta, and a hundred or more in Macon, Savannah and Augusta within a year, leasing a permanent meeting place in Atlanta and one other location, and launching a successful drive for ballot access in Georgia, with or without aid from the national party or its presidential campaign.

I was also a staff person in the 2016 campaign of Jill Stein, until I had to leave because of illness. I contributed to the ballot access and campaign plans, to Jill's tour of NC and GA, composed a number of mailings, operated parts of the web site, and more.

At the GP's 2016 Annual National Meeting, I worked with Howie Hawkins of the NY Green Party to prepare and present what was undoubtedly the best attended workshop of that year's offerings, on the subject of transforming our party into a dues paying membership organization, the model followed by successful opposition parties almost everywhere in the world except the US.