Chris Hedges to run for Congress on Green Party line 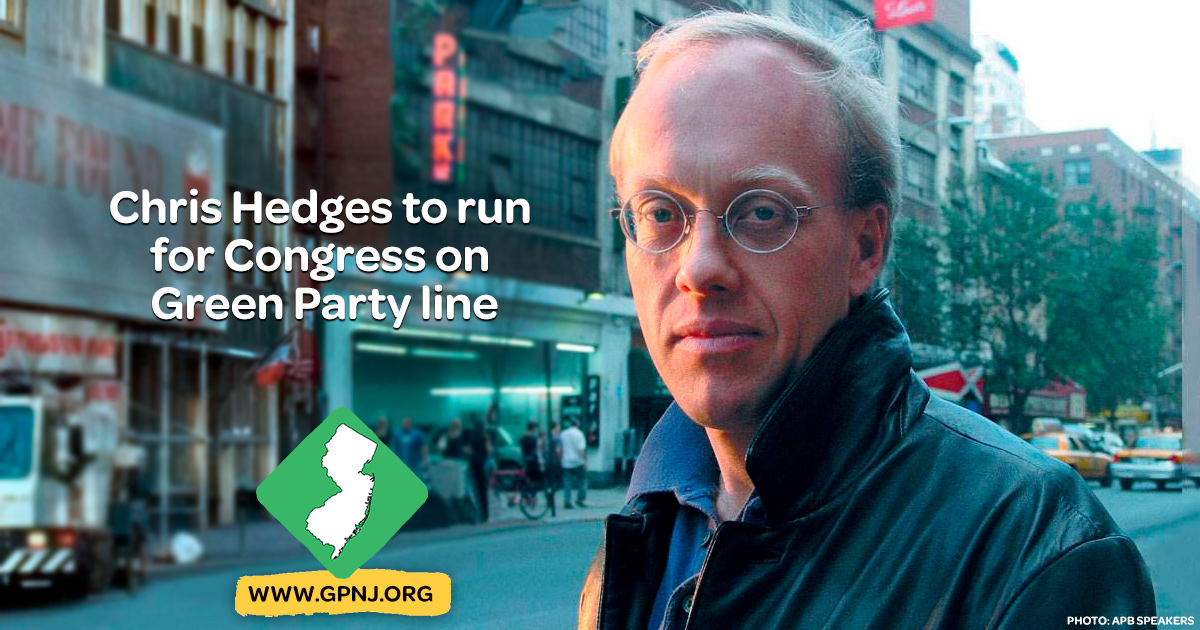 TRENTON, NJ – The Green Party of New Jersey (GPNJ) is excited to announce its endorsement of internationally renowned journalist, author and activist Chris Hedges as the GPNJ candidate for U.S. Congress in District 12. He challenges Rep. Bonnie Watson-Coleman (D), as well as the entire “political machine” that has control over most of New Jersey. (For information about the towns in District 12, click here.)

“The addition of Chris Hedges to an already strong slate makes the Green Party’s presence in New Jersey’s elections this year one of the strongest ever and definitely the strongest since the 2016 elections and my involvement in the Green Party of NJ,” said Barry Bendar, Elections Committee. “I am excited about the opportunity for the Greens to raise our profile -- as well as to focus on issues in ways that neither the Democrats or Republicans will.”

In a questionnaire submitted to GPNJ’s Green Council, Mr. Hedges indicated that the priority issues of his campaign include: Confronting the accelerating ecocide, putting an end to reliance on fossil fuels, promoting the real Green New Deal and slashing of the military budget. Other issues include getting big money out of politics, opposing the continued creation of charter schools instead of strengthening public education, and promoting the need for a true single-payer health insurance program to replace what passes as health insurance in this country. The critical nature of this issue was made more visible during the COVID-19 crisis.

“I am excited about this opportunity to raise the visibility of the nation’s most critical issues to a new level,” said Madelyn Hoffman, GPNJ’s candidate for U.S. Senate in 2020. “Chris Hedges brings so much knowledge and experience to our campaigns. New Jersey voters will have the opportunity to vote for candidates providing a much-needed alternative to the corporate-dominated, pro-war and pro-rich Democrats and Republicans.”

Craig Cayetano, one of GPNJ’s State Co-Chairs said, “Having a voice such as Mr. Hedges who advocates on behalf of the working class and for an alternative party step up and into a Congressional race elevates the Green Party, not only in New Jersey, but nationally as well. There are many people unsure of where the Sanders movement belongs or goes after the primaries. I can assure them there is a home for progressive politics here in the Green Party of New Jersey.

“Chris Hedges has been a champion for democratic rights and civil liberties against mass incarceration, mass surveillance, and the suppression of dissent,” said Howie Hawkins, GPNJ endorsed candidate seeking Green Party United States (GPUS) nomination for president. “He has been a prophetic voice for socialist solutions to the pressing problems of climate, inequality, and nuclear arms. As Green Party candidate for Congress, he will be a compelling advocate for the positive changes we need.”

Chris Hedges joins the already declared slate of Green Party of New Jersey’s (GPNJ’s) candidates Madelyn Hoffman for U.S. Senate and Craig Cayetano for Town Council in Hawthorne’s Ward 3. The top of the ticket for the New Jersey Greens will be decided in July, when the Green Party US (GPUS) chooses its presidential nominee. GPNJ endorsed Howie Hawkins for President at its convention earlier this month with a resounding 79% of the vote. Howie Hawkins named Angela Walker, a Black Lives Matter Activist and Socialist Party USA Vice Presidential candidate in 2016 as his Vice-Presidential running mate for 2020.

"Young people are excited to support Chris Hedges and his campaign for Congress, because Chris Hedges has a long history of standing up on issues that are important to young people,” said Matthew James Skolar, Chair of the (Young Eco-socialists) YES Caucus of GPNJ. “Incumbent Congresswoman Bonnie Watson-Coleman, although not the worst of legislators from New Jersey, has not been clear on her stance when it comes to free, public higher education, supporting an environmentally sustainable future, or actively supporting the anti-war movement. Youth are excited to get behind someone who will be clear on these issues and so much more."

The Green Party of New Jersey has been growing steadily since 2017 from 2,977 registered Greens then to 11,214 as of March 2020! This slate of candidates for 2020 should continue that trend upward into 2021. To read our platform, volunteer and donate please check us out at gpnj.org.

Our immediate focus is to help Mr. Hedges get on the ballot for November. People that reside in Congressional District 12 and have not signed another candidate’s petition for U.S. Congress in District 12, may sign for him at this link, https://bit.ly/HedgesPetition.

You can check to see if you live in District 12 here.

We are proud to make this announcement and ask for your signature while the Hedges team prepares their website and full campaign roll out.