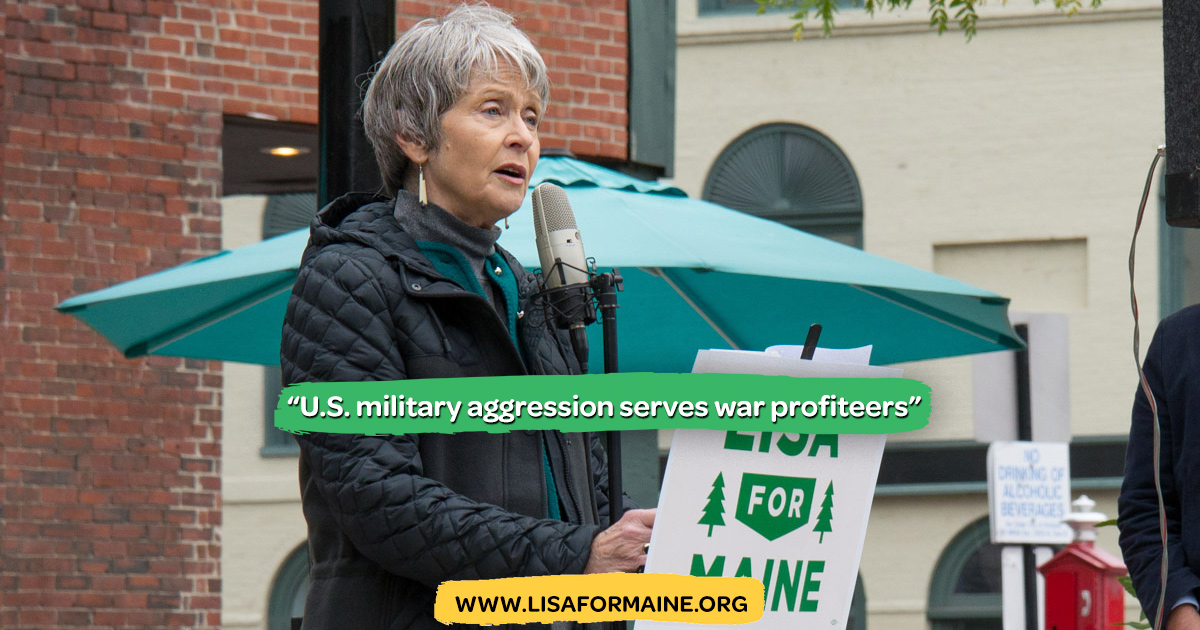 U.S. Senate Candidate Lisa Savage, of the Maine Green Independent Party, strongly condemns Thursday's airstrike by the U.S. military near the Baghdad, Iraq, airport. At least five individuals were killed in the drone attack, including Major General Qasem Soleimani, of the Iranian Islamic Revolutionary Guard and Chief of its Quds Force, and Abu Mahdi al-Muhandis, pro-Iranian chief of an umbrella group for Iraqi militias.

The Pentagon confirmed they acted on President Trump's orders, bypassing Congress. The Pentagon described the airstrike as a defensive action to protect U.S. personnel abroad, but many observers of the Middle East are warning that the strikes will escalate tensions in the region and could provoke a hot war amid increasingly strained relations between the U.S. and Iran.

"U.S. military aggression serves war profiteers, not the people," said Savage. "We cannot bomb our way to a peaceful resolution of the conflict zone our nation has created in Iraq. Nor is deliberately provoking Iran in our best interests as a nation. Diplomacy is urgently needed. A wise government would adhere to international law, including the Kellogg-Briand Pact, Nuremberg Charter, and United Nations Charter, which prohibit pre-emptive wars or first strikes."

Specifically, Savage called for repeal of the Authorization for Use of Military Force (AUMF) 2001, and opposes any measures "authorizing" preemptive or illegal military actions by delegating to the president sole power to commit acts of war.

"The restoration of congressional authority over the president's use of the US military is needed now more than ever," said Savage, an antiwar organizer in Maine for years prior to announcing her run for the U.S. Senate under ranked choice voting. "We need senators and congresspeople willing to stand up to the Pentagon and the executive branch of government to say 'no' to more warmongering. We need elected officials who reflect the will of the people rather than the will of corporate campaign donors who profit from endless war."

For more information on Lisa Savage's positions on foreign policy issues, see the website for her campaign for the U.S. Senate, www.LisaforMaine.org.