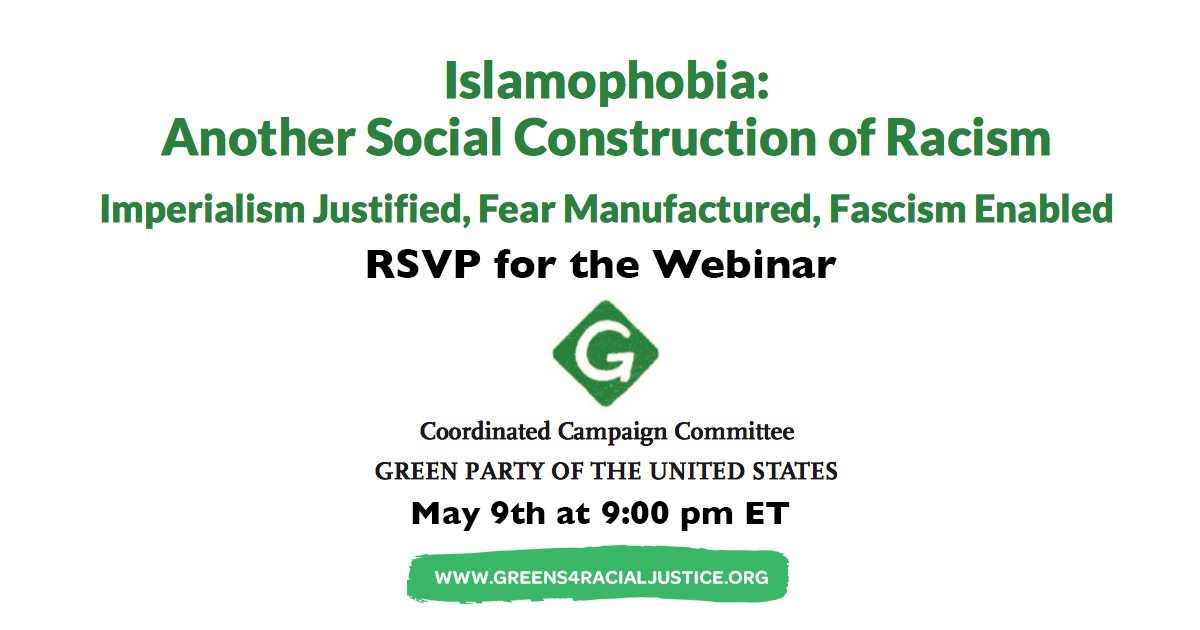 The Green Party's Coordinated Campaign Committee has released a briefing paper titled "Islamophobia: Another Social Construction of Racism". The paper is intended to be a guide for use by Green candidates and activists.

Join the authors of this paper to learn more about Islamophobia and how Green Party candidates and activists can combat it through policy, advocacy, and community-building. The briefing paper recently published by the Coordinated Campaign Committee on Islamophobia is the result of a collaboration between Hugh Esco and George Friday, and synthesizes months of research on the subject.

The call will take place on May 9th and will be led by Hugh Esco, George Friday, and Farheen Hakeem.

Participants are encouraged to read both the trifold and the full briefing paper before the call. Both are linked at this page: http://www.greens4racialjustice.org/islamophobia

Hugh Esco currently serves as the cochair of the Georgia Green Party. He staffed the McKinney 2008 campaign, has had a hand in recruiting dozens of Green candidates for local office in Georgia and has twice run for state-wide office with the nomination of the Georgia Party. By day he automates deployments for a fortune-100 company at an office in the Atlanta area. The briefing paper recently published by the Coordinated Campaign Committee on Islamophobia is the result of a collaboration between Hugh and George Friday, and synthesizes months of research on the subject.

George Friday is a national field organizer for the Bill of Rights Defense Committee / Defending Dissent Foundation, a member of the National Executive Team of Move to Amend; a Fellow at the Liberty Tree Foundation, a national Co-Chair for United for Peace and Justice and a past Co-Chair of the North Carolina Green Party. She trains organizers and community organizations, with an intent on creating 'broad, deep economic and social justice change'.

Farheen Hakeem has been conducting anti-oppression workshops for over a decade, and has extensive experience training people about Islamophobia. She was twice elected as National Co-chair of the Green Party of the United States, the only Muslim to ever be elected as a chair of any political party in the United States. She was also the campaign manager to Roseanne Barr's run for president, and featured in the documentary Roseanne for President.

Note: the call is 9 PM Eastern time. When you RSVP here you will get an auto-reply confirmation with the details of the call. It will mostly be a discussion but at least one of the speakers will have slides to share via the computer.

You must RSVP here: http://www.gp.org/ccc_webinar_confronting_islamophobia

Save the date: The next call on Voter Targeting will be Tuesday, May 23rd.