Congratulations to all Greens and the Left Unity Slate! 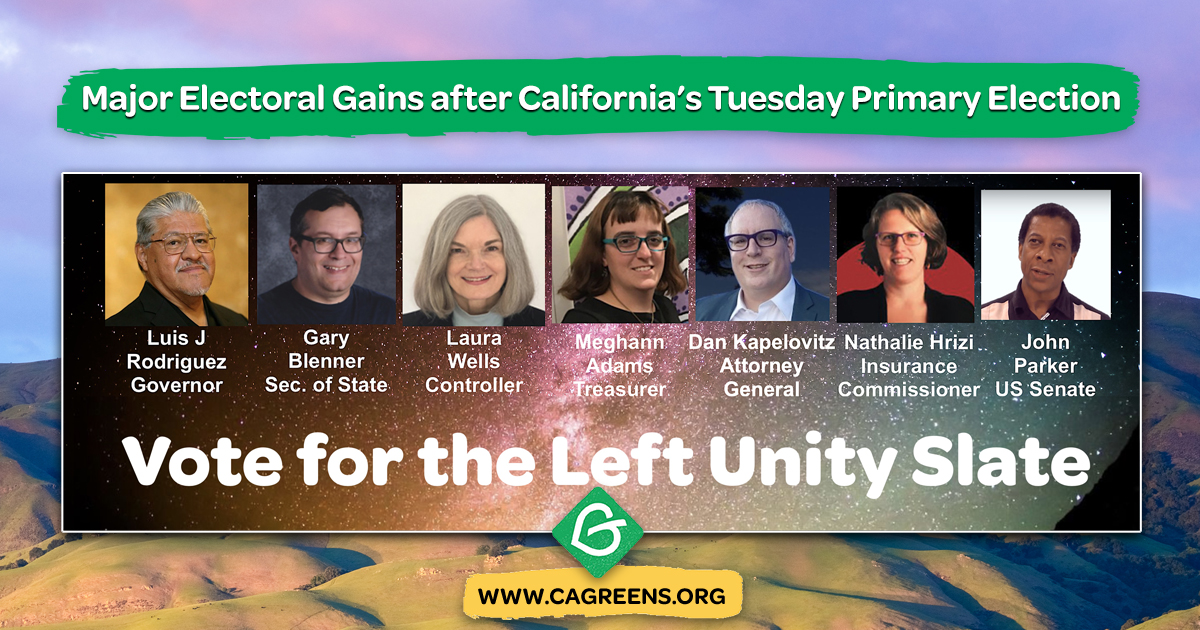 June 10, 2022, Sacramento, CA - California's Green Party and Peace and Freedom Party are pointing to major electoral advances after Tuesday's primary election that ensured both parties ballot status until 2026 – they credit historic cooperation between the two parties in creating the first-ever “Left Unity Slate” of statewide candidates that resulted in significantly higher-than-usual vote totals.

In October of 2021, the Green Party and the Peace and Freedom Party endorsed a statewide "Left Unity Slate" of Green and, Peace and Freedom candidates for the 2022 June primary and did not officially compete for the same offices.

"Those who crafted the Top Two Primary scheme did so with the intention of freezing us out," said Kevin Akin, State Chair of the Peace and Freedom Party, adding, “Today, as a result of forming the ‘Left Unity Slate,’ most of our statewide candidates received more than 2 percent of the vote, enough to ensure ballot status for both parties for another four years." Some “Left Unity Slate” candidates did even better than that overall, and in some parts of the state garnered nearly 10 percent.

“Our left unity approach is needed now more than ever, when the majority of voters are realizing that corporate parties have not, and will not meet the needs of our communities,” said Laura Wells, of the Green Party of California’s Coordinating Committee, adding, “we will continue to build together so we can put real choices on the California ballot.”

Seven of the “Left Unity Slate” candidates for partisan statewide office mentioned the slate in their statements in the Secretary of State's Voter Information Guide that was mailed to every voter in the state, and the official endorsements by both parties were printed in the sample ballot pamphlets mailed out by all 58 California counties.

Considering the crowded field of candidates in two of the statewide races, it is not surprising that the slate’s candidate for Governor, Luis J. Rodriguez (Green) is currently at 1.3 percent, and John Thompson Parker (Peace and Freedom) candidate for US Senate is at 1.2 percent. The “Left Unity Slate” also included Marco Amaral, a non-partisan candidate for Superintendent of Public Instruction, who is currently at 7.9 percent in the vote count.

"We are very encouraged by the “Left Unity Slate” concept, and pleased that each of our candidates clearly got more votes than they would have if just running as individual candidates," said Akin. Wells added, "We are already exploring other forms of cooperation between our parties and expect this will strengthen both parties and have an impact on California's politics to benefit the people of our state.”