The Green Party denounces business deals and trade policies through which multinational corporations profit from the destruction of the Brazilian rainforest. 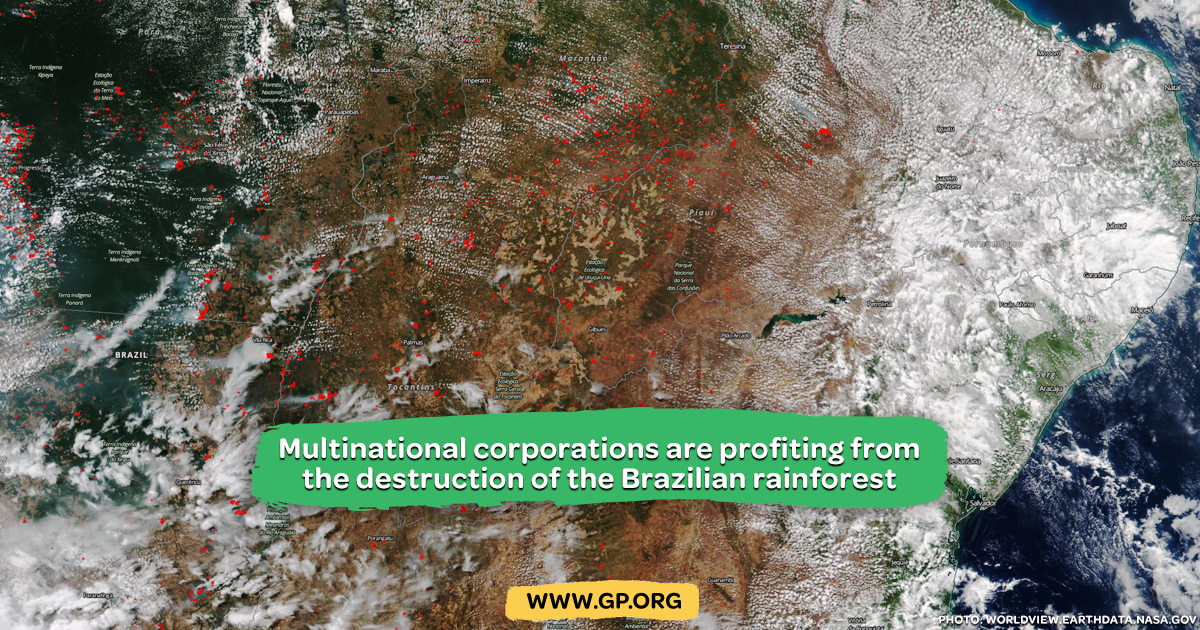 Private concerns are gutting the Amazon rainforest, contributing to fires, the loss of plant and animal species, and global warming through the release of carbon as trees are cleared. More than 74,000 fires have burned approximately 7,200 square miles this year in the Brazilian portion of the rainforest.

"The cattle sector of the Brazilian Amazon, incentivized by the international beef and leather trades, has been responsible for about 80% of all deforestation in the region. The lax enforcement of rules and regulations by leaders in Brazil and the United States have set the tone for widespread pillage of protected areas in both countries."

Among other things, scientists recommend that we restore ecosystems and stop burning fossil fuels to avoid "irreversible loss in land ecosystem services required for food, health and habitable settlements."

"Greens have been at the forefront in calling for a strong international climate treaty," said Steve Newman, Secretary of the Green Party of Florida and a member of the Green Party of the U.S. Eco-Action Committee. "The climate treaty reached in Paris in 2015 is inadequate to address the climate change crisis, and the current impasse at the international level displays a dangerous lack of commitment toward addressing a climate emergency. The Green Party calls for legally binding commitments for reducing greenhouse gas emissions by at least 40% by 2020 and a 95% reduction by 2030 over 1990 levels."

The Green Party further calls for:

Fires are devouring the Amazon. And Jair Bolsonaro is to blame
Miranda, David. The Guardian, Aug, 26, 201

Fires in the Amazon could be part of a doomsday scenario that sees the rainforest spewing carbon into the atmosphere and speeding up climate change even more
Baker, Sinead. Business Insider, Aug. 22, 2019

You And Meat Can Save The Planet
Rowland, Michael Pellman. Forbes, Aug. 23, 2019

The Amazon Fires Reveal the Dysfunction of the Global Community
Foer, Franklin. Defense One, Aug. 25, 2019

2018 Outside Spending, by Donors' Industries
Center for Responsive Politics. OpenSecrets