The Contradictions of Cross-Endorsements in the Governor's Race 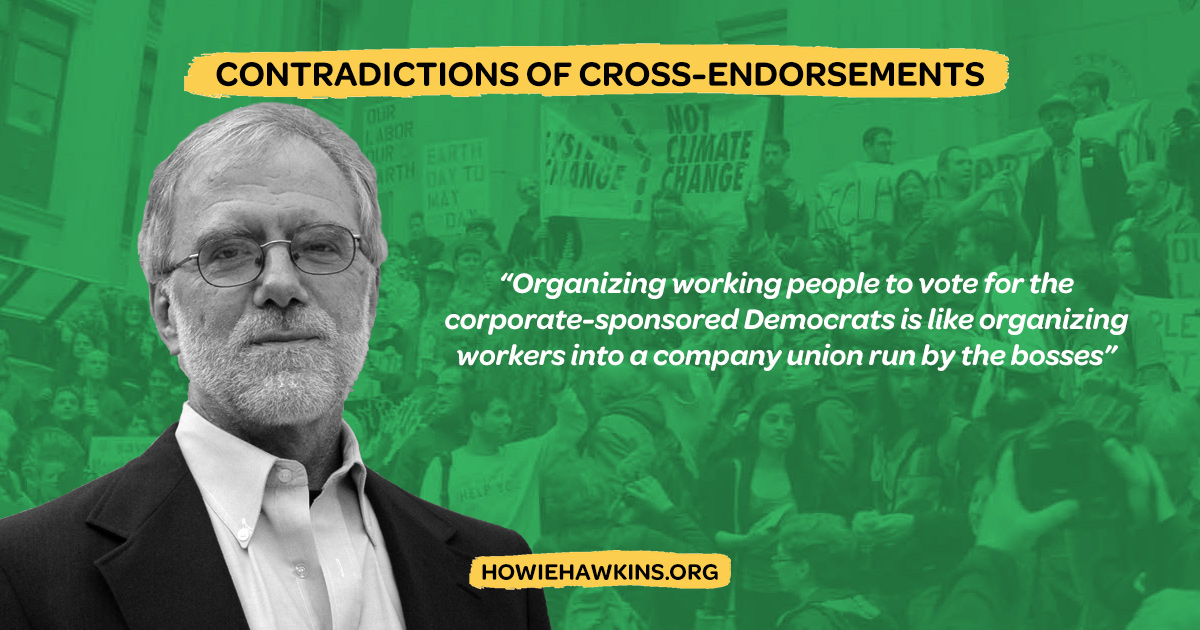 I feel for rank-and-file WFP progressives. It's an abusive relationship. They got double-crossed by Cuomo in 2014 when they endorsed him. This year they got strong-armed by Cuomo when they didn't.

I would like to reassure WFP progressives that, whatever happens in the Democratic primary, the Green Party gubernatorial ticket will offer a progressive alternative in the November 6 general election.

Only three parties – Democratic, Republican, and Green – created their ballot lines by running their own candidates. The other five ballot-qualified parties got the 50,000 votes for governor needed for a ballot line by cross-endorsing the Democrat or Republican. These so-called "fusion" parties function like political clubs inside the major parties, not independent parties.

When the WFP endorsed Cuomo over Zephyr Teachout in 2014, Cuomo's double-cross began immediately. He backed away the next day from promises he made to get the endorsement in his so-called hostage video to the WFP convention. At the Celebrate Israel Parade the morning after, Cuomo told reporters, "It's very simple at these political conventions: you either win or you lose. Uh, and I won…At the end of the day I won the endorsement, and that's what's really relevant."

On that morning after, Cuomo broke his promise of the night before to allow municipalities to raise the minimum wage. Asked about his promise to help Democrats take control of the State Senate, Cuomo said, "This is about electing people who support an agenda. I also will oppose Democrats who have opposed things that we have tried to pass."

Over the next nearly four years, Cuomo spent none of his political capital to pressure the Independent Democratic Conference to break its governing coalition with Senate Republicans. Cuomo used the Senate to deflect blame for his failure to enact so much of what he had promised the WFP, including full funding of public schools, the Dream Act, abortion-rights protections, government ethics reform, and public campaign financing. Cuomo played the WFP and took their votes for granted.

So this year the WFP was right to endorse a progressive challenger. Cuomo's response, according to WFP leaders, was a power play to pull the unions out of the WFP and threaten to cut union and state funding for WFP-affiliated community organizations.

Then there are the scores of WFP-endorsed "Working Families Democrats," as this nominal third party refers to them, who are running for the State Senate and Assembly. No doubt these Democrats feel pressure from the Democratic machine, and particularly the big Democratic donors who back Cuomo, to endorse Cuomo...or else.

Such are the contradictions of fusion balloting. It would be confusing for the WFP to run Nixon against Cuomo in November when it is also supporting Democrats whose ticket would be headed by Cuomo. Organizing working people to vote for the corporate-sponsored Democrats is like organizing workers into a company union run by the bosses.

The Green Party takes a different approach. We organize working people and progressives into a party that is independent of the Democrats' corporate donor swamp of real estate barons, Wall Street bankers, media and movie moguls, military contractors, and big pharma and insurance. Our political independence forces Democrats to compete for progressive voters instead of taking them for granted. The Green vote gives us political leverage. We try to win, but we don't have to win the office to make a difference.

The 184,419 votes for 5% in the general election that the Green gubernatorial ticket received in 2014 reinforced the 192,210 votes that Zephyr Teachout got in the Democratic primary. Cuomo, who had wanted to run up his vote for a presidential run, received a smaller percentage than he had in 2010. Seeking those votes to his left after that election, Cuomo adopted a number of Green demands, from the fracking ban and paid family leave to partial implementation of the $15 minimum wage and tuition-free public college.

Greens will demand more this year, including single-payer health care, fully-funded public schools, a stop to fracked-gas infrastructure, 100% clean energy by 2030, and public campaign finance. And we will still be on the ballot in November.

Howie Hawkins, a recently retired Teamster from Syracuse, was the Green Party candidate for Governor of New York in 2010 and 2014 and is seeking its nomination again this year. On Twitter @HowieHawkins.