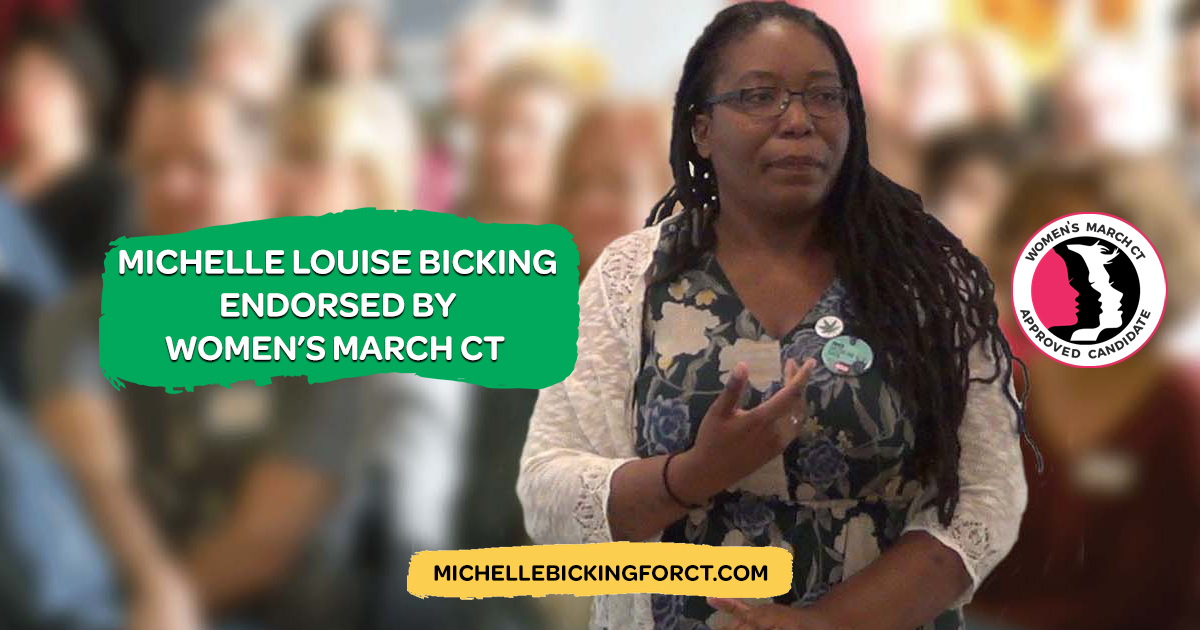 August 30, 2018 — Congressional Candidate Michelle Louise Bicking has recently been honored with the distinction of being an officially Approved Candidate by the Women’s March CT. Bicking is the first Caribbean-American woman of color to run for Congress in Connecticut, and is promoting a progressive platform of Peace and Justice, versus a long-term incumbent, Joe Courtney, who is the recipient of much support and many contributions over the years from manufacturers of military weapons.

Bicking is a fervent Pro-Choice supporter as well as advocate for pay and gender equity and LGBTQIA rights. Additionally her platform distinguishes her from Courtney in calling for Eliminating Mass Incarceration and Student Debt, and Building a Peace Economy, as outlined on her website and on Facebook.

Green Party of Connecticut
www.ctgreenparty.org
For Immediate Release
August 30, 2018
Contact:
Owen Charles, 203-421-1094, [email protected]
Although Joe Courtney is a highly favored incumbent, Bicking’s campaign hopes to transform the discussion and notes that Courtney is a long-time establishment Democratic insider, and Super Delegate who went against the wishes of voters in his district to cast his Super Delegate vote for Clinton, when voters actually chose Bernie Sanders. She highlights that he also goes against the wishes of citizens in opposing Single Payer Health Care (and has not signed on ‘Medicare for All’), approving massive increases in an already bloated Defense budget, and in not supporting measures to make College truly affordable and Eliminate Student Debt.
The official announcement stated “your campaign has been given the Women’s March Connecticut Approved Candidate distinction.  Thank you again for standing up for our Unity Principles and representing a vision of our collective liberation which includes Women’s Rights, Ending Violence, Reproductive Rights, LGBTQIA Rights, Worker’s Rights, Civil Rights, Disability Rights, Immigrant Rights and Environmental Justice.”
For more information visit www.MichelleBickingforCT.com or https://www.facebook.com/mlbctgreen/
# # # # #
nwc
Do you like this post?
Tweet