Green Party candidate for governor not intimidated by big-money opponents 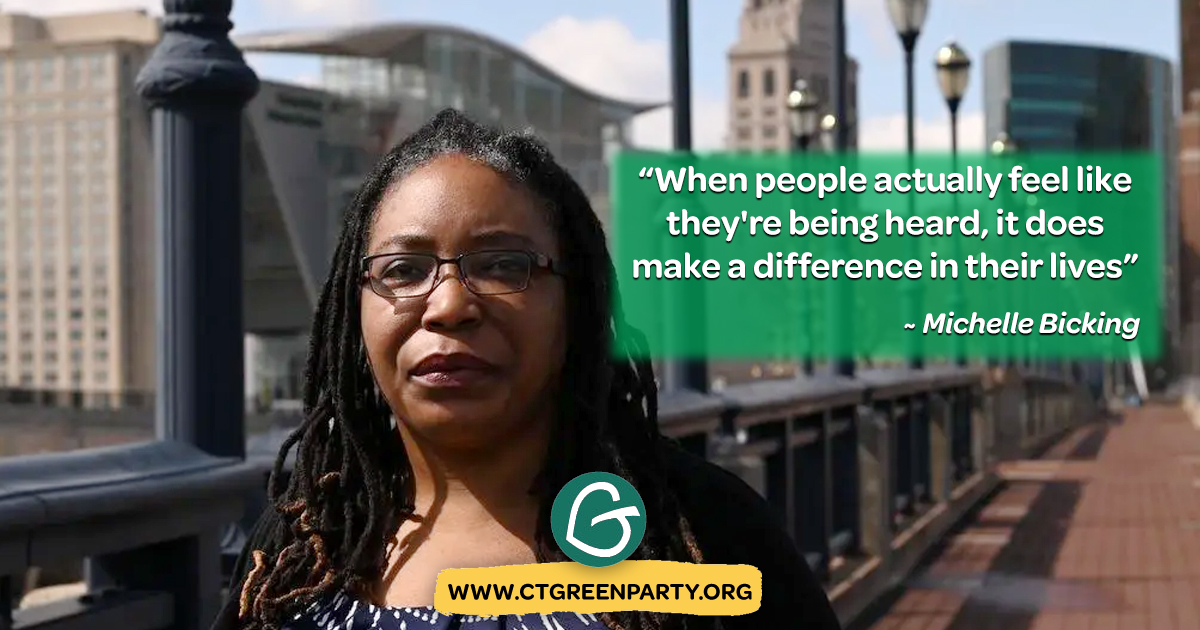 Michelle Bicking says she's running for Governor under the Green Party of Connecticut not to gain power, but to spread it around. A 45-year-old licensed clinical social worker who lives in Newington, Bicking was nominated last weekend at the party's annual meeting in Hartford.

She is a native of the Bedford-Stuyvesant neighborhood in Brooklyn, N.Y., has lived in Connecticut for about 13 years, and holds several undergraduate and master's degrees, including in Public Administration, Social Work, and Spanish/Latin American studies.

In an interview Thursday, Bicking said her focus both professionally and politically is helping people who are marginalized or excluded from vital services such as health care and education.

"I am running for governor to make room at the table that has been long denied for many generations in this state," she said. "I know what it looks like when people are facing financial and food insecurity. I know what it looks like when families don't have the access to medical and mental health services for their family members. I see that first hand in my work and being on the front lines with clients and even family and friends who are going through so much really affects me. You can't separate the personal from the political."

Providing universal, single-payer medical coverage and equal access to quality education are at the top of her platform.

She also would push for an improved rail system in the state that would allow residents of some urban and outlying rural areas to better access centers of education, health care and employment.

"I foresee the possibility of linking 13 colleges through a regional rail system that bisects the state," mainly using existing lines, she said. "It would have a phenomenal effect on local communities to be able to use public transportation versus relying on cars."

The Green Party has several thousand members in Connecticut, she said, and its platform is to promote "democracy, social justice, ecology, and peace."

Its first candidate for office ran in the 1985 election for Mayor of New Haven.

No party candidate has been elected to the General Assembly, or to any of the six state-wide constitutional officers, or to any federal seat.

The party has in recent years succeeded in running candidates for local offices such as town councils and boards of selectmen, education, and finance.

She said her campaign will only accept donations from small, private donors, meaning she will meet voters through on-the-ground events and door-knocking as opposed to paid television ads.

Asked how she feels about competing with big-money candidates such as sitting Democratic Gov. Ned Lamont and his Republican challenger Bob Stefanowski, Bicking said, "I'm not intimidated at all. My mother was a rock and my father was a sword who cut through the BS to make things happen. So between the two of them, they truly forged someone who's more than capable to handle anything."

She said her overarching focus on helping lower-income families may not be a traditional path for a politician in Connecticut, but she feels that kind of advocacy is particularly important today.

"I'm having discussions on what matters most, our families and children being able to live a life that they deserve," she said. "Being able to see their weekly or monthly check go further to pay the bills. I'm not afraid of having those conversations, and when people actually feel like they're being heard, it does make a difference in their lives."

Bicking's running mate for Lt. Governor is Cassandra Martineau, a lifelong social justice activist who serves as an executive officer in the Windham/Willimantic NAACP.

Martineau also is on the Willimantic Taxing District Board of Directors, has served on Windham's Zoning Board of Appeals, and is a founder of Willimantic Rainbow Connection, an LGBTQ+ group.

"Too many elected officials focus on business needs, and not the needs of the people," Martineau said. "It's time to focus on the needs of those left behind in our economy."