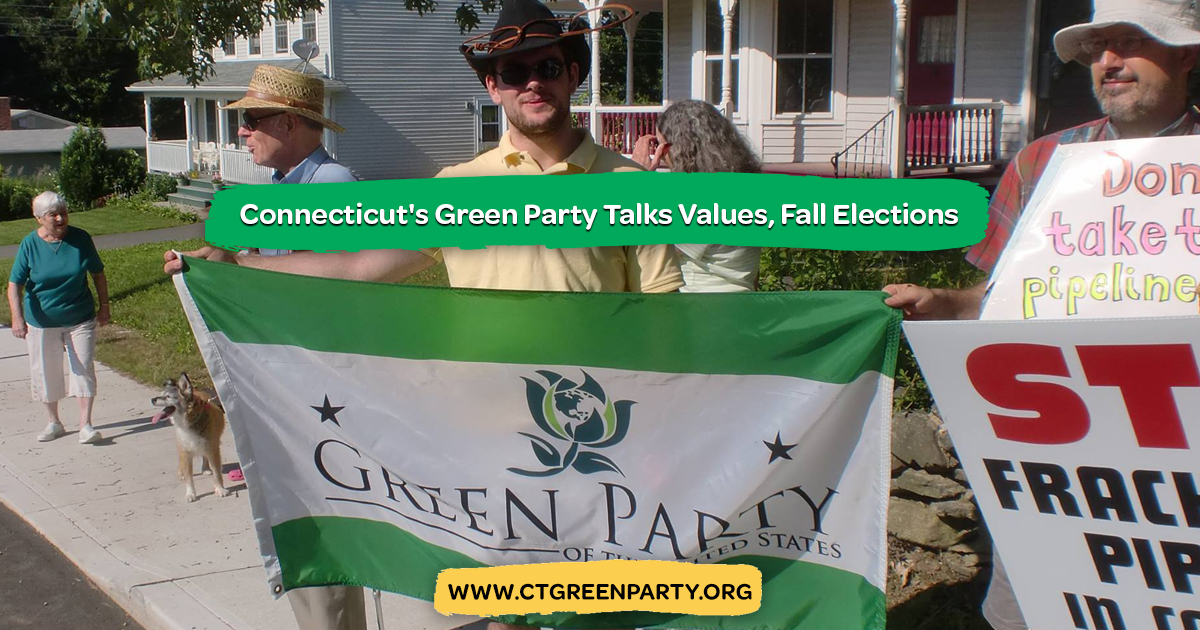 The Connecticut Examiner spoke with Fiore and Goselin about the identity of the Green Party, and how they see the party's prospects for this fall's elections.

Martineau, who is running for Congress in Connecticut's second district, was unavailable to be interviewed for this story.

This interview has been edited for clarity.

How do you think about the role of chair of the Green Party of Connecticut?

Goselin: According to our bylaws, we have three co-chairs, and we cannot have three co-chairs of the same gender expression. As part of the executive committee, we work together on all of the major policy issues that the Green party at the state level has to deal with, and we help coordinate work and communication among the chapters. Each of us also is heavily involved in other projects. Dustin is working on criminal justice reform, and Cassandra is also chair of the Windham Green Party and is running for office this year in Windham, and she's very active around police accountability there. I've been doing a lot of work around organizing, trying to build new chapters, and recruiting candidates.

How do you go about recruiting the right candidates to run under the Green Party?

Fiore: We make sure potential candidates share key values with us, so we look through their policy positions and posts online and make sure that what they believe is in line with our issues. There are always certain issues particular to a certain municipality or a specific issue they're running on, but we want to make sure that if we're endorsing someone, that they are in line with us.

What are some of the policy positions you see as necessary for any Green Party candidate to get behind?

Goselin: For a long time, the Green Party has favored the idea of more police accountability. In the last year and a half, there's been such a tremendous upsurge in response to the murder of George Floyd, and we've been really excited by those calls for police accountability since finding alternatives to a militarized police force is very high on the list for us.

Last year, I spoke with Rob Derry, a Green Party police commissioner in Clinton and former police officer, and he shared some of his concerns about the idea of defunding the police. Do policy positions like that feel dissonant with the party overall?

Goselin: I know folks in the Clinton Green Party, I don't know Rob personally, but we know that at the local level, folks are not always going to be… we don't have a political line that folks are absolutely required to adhere to. There's no orthodoxy involved here.

Fiore: Part of our work is educating people on what defunding the police actually means. The vast majority of people, when discussing this issue, are either not being honest or are not quite sure on what the verbiage is. Defunding the police doesn't mean that you wake up tomorrow and there are no police. It means that when you look at a municipal budget and upwards of 70 percent is going to law enforcement, we think that more of that pie needs to go to community resources. Crime reduction comes from funding things like education, after school programs, and job placement programs, rather than putting all of the money into a militarized police force.

How are you feeling about this fall's municipal elections, and what candidates are you most excited about?

Goselin: The three communities where the Green Party has consistently had a presence are New London, Clinton and Windham. In all three towns, we have elected members to the town council, planning & zoning, board of education, and all of the different roles within the local community. In those three towns, we're running a slate of candidates for a number of different offices.

We're a small organization, so we don't necessarily have enough to fill every slot, but we have folks running for Town Council and Board of Education in all three communities. Beyond that, in Stamford, we have a candidate running for constable.

Constable is a local office that a few towns in Connecticut still have, and in Stamford, the constable is responsible for carrying out evictions. Cora Santaguida, our candidate, is running on the promise that if elected, she will refuse to carry out eviction notices.

Are you planning to field a candidate for the gubernatorial race next year?

Democrats and Republicans in recent years have fielded notoriously forgettable candidates at the state level, especially for governor. No one was excited about who they got to vote for in 2018, and I doubt 2022 will be very different. I think if we put up a full slate of candidates and promote the Green party as an alternative that stands for empowering working people and favors making rich people pay their fair share of taxes, I think we'll do well. People are sick and tired of political machines that put up these carbon copy candidates every four years.

How do you see your relationship to other political parties in the state, and do you cross-endorse candidates from other parties that you see as supporting Green Party values?

Fiore: Our policy the vast majority of the time is not to cross-endorse, but we do want to get things done, and you often can't get things done all on your own. Our approach is more to think about issue coalitions, so if we're aligned with Democrats or Libertarians on an issue, we're willing to work with them there, but the vast majority of the time, we draw the line at actually cross-endorsing. Gathering signatures is always a challenge, but with COVID and social distancing, there haven't been community events like town fairs where we can go gather signatures, which has made that even more difficult. As things open back up, we'll have more opportunities to gather signatures.

Goselin: It creates a difficult situation because as a minor party, you have to petition to get on the ballot, but the moment you don't run a candidate, you lose that ballot line and have to petition to get on the ballot again. There's an incentive for us to just cross-endorse liberal or progressive Democrats, but we really believe in the idea of building an independent third political party. We're open to working with anybody, but believe that to make a difference, being a fully independent party is important.

What are some of the biggest misconceptions about the Green Party in Connecticut?

Fiore: Based on the name of the party, a lot of people just want to pigeonhole us as only being about the environment and climate change. There's this idea that we only have a few niche issues that we actually address, but that's not the case. People also seem to think the Green Party only runs candidates for president. I hear all the time that we shouldn't be able to expect much success if we're only running candidates for president, but we run candidates for state and local elections all the time. We also do more than just run candidates, we work all the time with community organizations and support different bills in the state legislature.