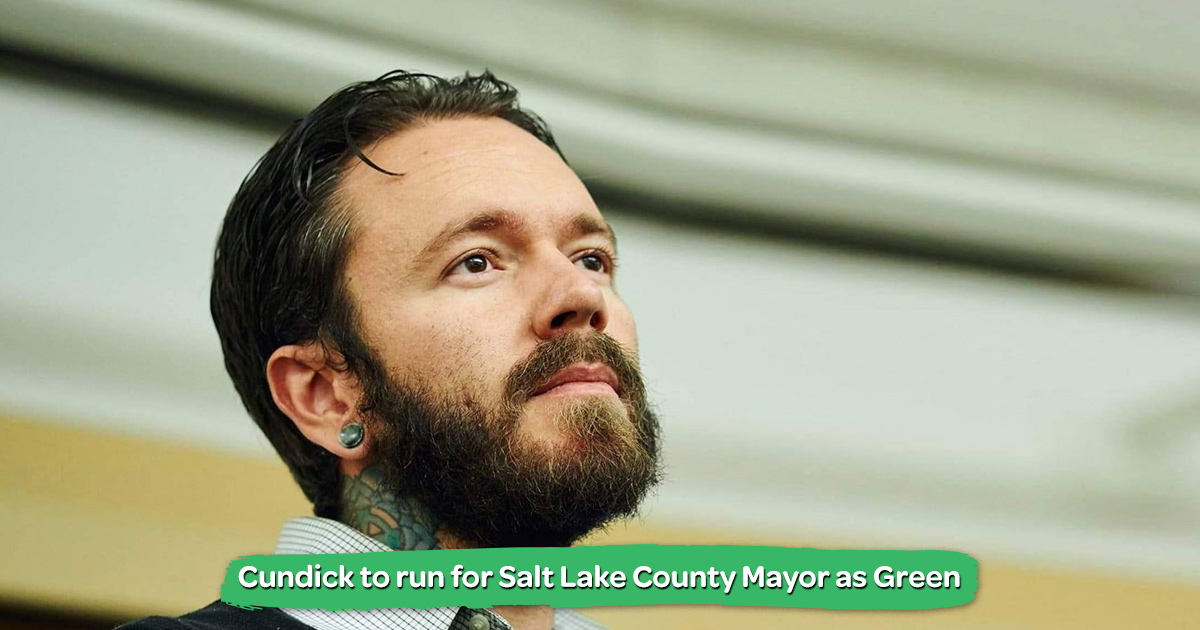 Salt Lake City – An air quality and local agriculture activist who’s been fighting the development of the inland port announced his decision this month to throw his hat into the ring for Salt Lake County mayor in 2020.

Michael Cundick, 33, is the first candidate to formally declare in the upcoming race, in which he plans to run on the Green Party ticket on a platform that promotes environmentalism as the solution to a broad range of issues facing the county.

“I’ve been fighting hard for local food, gardening [and] community building activism for the last eight years, and thought I was a good person to bring those ideals onto the political front,” Cundick told The Salt Lake Tribune in an interview Thursday. “I think it’s really important that every front line we’ve got we’re talking about the principles of how to get in harmony with life and the natural environment and rally communities around those.”

Salt Lake County Mayor Jenny Wilson, who was appointed to the seat earlier this year after a special election, has said she will run to hold her position next year but has not yet officially announced her candidacy. The filing deadline is not until March.

Cundick, a Cottonwood Heights resident, grew up in Utah County and moved to Salt Lake County in his early 20s. He spent his “whole teens and twenties” playing in rock bands on tour with a band called Loom and became interested in regenerative farming and permaculture about eight years ago.

After that, he launched his first nonprofit, an organization called Artists for Local Agriculture that sits at the intersection of those two interests.

“It just made so much sense to focus on local foods,” Cundick said. “It’s where a vast majority of our problems can be solved, when we understand our relationship to food and the land that we’re a part of.”

Food production makes up about 25% of a household’s carbon footprint in Utah, according to Salt Lake City’s sustainability department. If elected, Cundick said he would seek to create urban gardens and farms within walking distance of each neighborhood in the county where people could grow their own food.

A few years after launching his agriculture collective, Cundick helped co-found the SLC Air Protectors, an activist group that advocates for clean air and seeks to support Native American stewardship across the state through grassroots organizing. He currently runs the Krishna Food Forest and Farm, a one-acre community farming space in Millcreek, and serves as chairman of the Utah Permaculture Collective.

Over the last year, Cundick has worked to fight the inland port, a massive distribution hub development planned for a large swath of Salt Lake City’s northwest side that advocates have worried would lead to increased tailpipe emissions, worsened air quality and detrimental effects on birds and other wildlife in the area.

Cundick described himself as “exceedingly anti-port,” seeing the project as part of a larger trend in Utah of “treating all of our public lands as just a resource for fossil fuels.” And he criticized Wilson, his likely future opponent, for being a “career politician” who he believes won’t stand as strong as he would against the development.

Wilson has advocated in the past for large economic development projects like the port to provide a net benefit to the community and to address potential impacts through “good planning” and addressing concerns around resources, transportation and the environment.

On Thursday, she declined to get into a back-and-forth over her views on the project, noting that the election was still more than a year out.

“I’m working diligently and hard as I’ve served in this role for the past year and at the right time will engage on campaign issues of concern to county residents,” she said. “Having said that, environmentalism is a priority of mine as evidenced by hiring a new environmental director and continuing to prioritize clean air and other concerns within the county.”

Cundick acknowledged the challenges a third-party candidate faces, but said he believes his campaign will be buoyed through engaging young people and underserved communities, with a special emphasis on reaching out and listening to the west side.

“I think that we're going to see huge numbers of younger voters and fringe voters that wouldn't normally think to get engaged with the political process because they're seeing someone that they trust and know will be in service to life, as is my campaign slogan,” he said. “We'll see a mountain of voters and from areas that I think hasn't been tried or done before in this valley by politicians.”

Cundick said the major issues he will be discussing as a candidate include access to clean air and clean water, affordable housing shortages, massive population growth and community engagement.

“I wouldn’t be doing this if it didn’t mean that a more beautiful world wasn’t more possible by getting this platform out there,” he said.