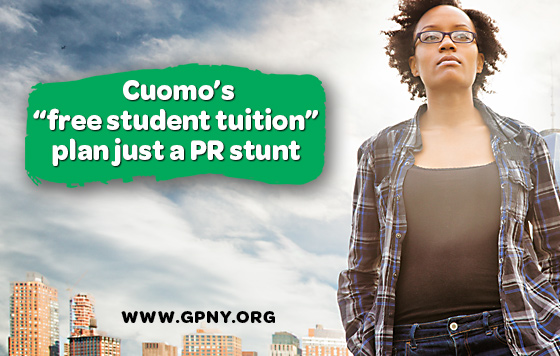 Albany, NY – The Green Party of New York called the Cuomo tuition-plan unveiled today wholly inadequate and said the reports of it making college free or affordable-for-all were false. The Greens pointed out that Cuomo's plan does not cover the $14,000 in yearly room, board and fees and would still leave students with $55,000 worth of debt from SUNY/CUNY 4-year schools. Party officers also said that it does nothing to address three decades worth of funding cuts at state schools. The Green Party called on Governor Cuomo and the Legislature to fully fund state schools and make college completely free, including tuition, room, board and fees so that students leave with no debt, as they do in most other nations, and to return to a program of open admissions so that college is truly open to all.

"Gov. Cuomo's Excelsior Scholarship program is the latest in a long line of posturing to the left on issues while providing the smallest of reforms. The program would not 'make state colleges free' but merely supplement existing federal loan programs. It will do nothing to combat the continuously rising cost of room, board and fees, which have become backdoor tuition increases. This program would cover $6,470 of the over $20,000 yearly it costs to attend a 4-year state college. We strongly disagree with Gov. Cuomo and Senator Sanders, who called the program 'revolutionary,' – it is wholly inadequate. The Green Party calls on Gov. Cuomo and the Legislature to pass legislation that truly covers the entire cost of college for all – tuition, fees, room and board. Countries around the world do this as a matter of course, and not just the E.U. SUNY and CUNY were largely free until 40 years ago –we can and should return to that time. We also call for a return to open admissions so that those who want to learn can. A truly democratic society requires democratic institutions of higher learning," said co-chair Gloria Mattera, a graduate of CUNY.

"I proudly received my Ph.D. from the University at Albany, SUNY and taught there as a graduate assistant and adjunct instructor. The governor's plan does absolutely nothing to address the funding crisis at state schools that led to skyrocketing costs. State colleges need to be fully funded and not rely on tuition and fees as revenue-generators. The de-funding of state schools has also led to the use of contingent faculty as cheap, exploited labor – a real program to address higher education costs would also fund state schools to allow for hiring a massive amount of full-time, tenured faculty. We need truly comprehensive legislation to address the crisis of higher education in New York – all the governor's plan does is put a band-aid on the problem and allow him to pretend to be a progressive, something he's become very good at doing," concluded co-chair Peter LaVenia.