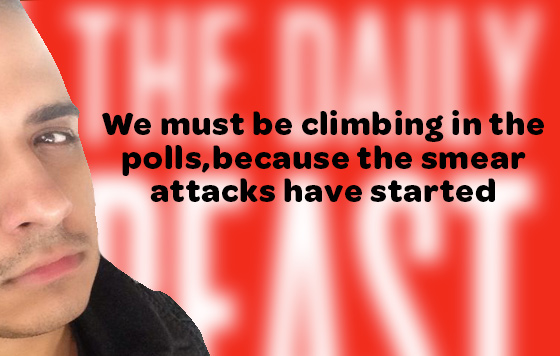 In response to an article from Daily Beast reporter Yashar Ali published on October 26, Green Party presidential candidate Dr. Jill Stein challenged "the willful misinformation and manipulative framing" of the Daily Beast article as "a blatant smear attack and hypocritical attempt to suggest conflicts of interest in my environmental and economic justice-focused campaign."

Dr. Stein noted: “If Mr. Ali is truly interested in conflicts of interest of political candidates and their families, where is his disclosure on the conflict of interest posed by Chelsea Clinton's position as a director of the corporate owner of the Daily Beast, IAC? He has created an imagined conflict of interest, perhaps to distract from the very real, harmful conflicts of interest in the Clintons’ pay-to-play schemes, back-room fundraising, and quarter-million dollar speeches for the predatory banks, health insurance industry, and fossil fuel tycoons, who have directly benefited from Hillary Clinton’s policy record as Senator and Secretary of State, as well as from Bill Clinton’s actions as President.”

Mr. Ali has failed to show a conflict of interest in Dr. Stein’s investments, as her policy positions have consistently opposed the interests of the companies that form a portion of most index and mutual fund profiles. By his logic, he insinuates that the 50 million plus Americans who have retirement accounts invested in mutual and index funds - including school teachers, public workers, and employees of any company that provides such funds to workers as a benefit - can never speak out or organize against corporate abuses. This disingenuous shaming exercise is an effort to silence dissent, and a blunt attempt to bully people into refraining from exercising their democratic rights to free speech and political action.

Below is Dr. Stein’s full rebuttal to the Daily Beast, which updates her original comment sent prior to publication:

Like many Americans who hold retirement accounts, pension funds, or who invest in the American economy, my finances are largely held in index funds or mutual funds over which I have no control in management or decision-making. Sadly, most of these broad investments are as compromised as the American economy - massively degraded as it is by the fossil fuel, defense and finance industries. Over the years I have taken steps to divest from the worst of these holdings - transferring my checking and savings accounts from Bank of America largely to a credit union, and divesting from GE, Dupont and Merck stocks I had been given decades ago.

While I have explored “green” mutual funds, I found their investments in fracking and large scale biofuels not much better than the non-green funds. I have not yet found the mutual funds that represent my goals of advancing the cause of people, planet and peace. Admittedly I have not spent a lot of time researching elusive ethical investments. I prefer using my time fighting for social, economic and ecological transformation, and recycling capitalist money into the fight to do so.

I was fortunate to have inherited over a half-million dollars from my parents. I have used this resource to help build the social and political movements needed for transformative change. I used this money to jump start my presidential campaigns in 2016 and 2012, statewide campaigns before that, and to help build the Green Party -- because, unfortunately, the most green, just investments won’t count for squat if the corporations and the super rich funding the Democrats and Republicans are still calling the shots. I also used this money to support my work with radical non profits, including the Massachusetts Coalition for Healthy Communities, and the Global Climate Convergence.

Of note, my husband and I hold separate investments that reflect somewhat different approaches to money management. These separate holdings are reported as such in my FEC filing.

Participating in the American economy by holding investments in mutual funds, retirement accounts, and index funds is a far cry from the Clintons’ back room fundraising and quarter-million dollar speeches for the predatory banks, health insurance industry, and fossil fuel tycoons. It’s also a world apart from the predatory economics, taxpayer bailouts, and tax-dodging of Donald Trump. To the contrary, these investments are what tens of millions of working Americans must do to secure crucial resources for retirement.

To suggest an equivalence betrays either mind-boggling cluelessness, or more likely, the attack-dog mentality of the Clinton-protection press, hitting on true proponents of social change in order to defend the precarious empire of the political elite.

The Daily Beast is suggesting that participating in the American economy is incompatible with working to change it. This is comparable to the position taken by anti-climate change press (like at Fox news) who say that riding in a car or airplane means you cannot criticize fossil fuels. Unfortunately, to change public policy, one must participate in the economy enough to generate the resources to create change, ideally in a way that minimizes damage and maximizes change.

We need real options for ethical investing, including investments in the cooperative economy. Retirement security should be a human right, guaranteed through expanded Social Security, not privatized through these types of investment accounts where financial managers make unsavory decisions for us. And above all, we must build political power that is independent of multinational corporations and the political elite that serve them. This is essential if we are to restore the elusive promise of American democracy and avert the imminent threats of climate catastrophe, endless war, and nuclear confrontation -- and build the just and sustainable future that is within our reach.