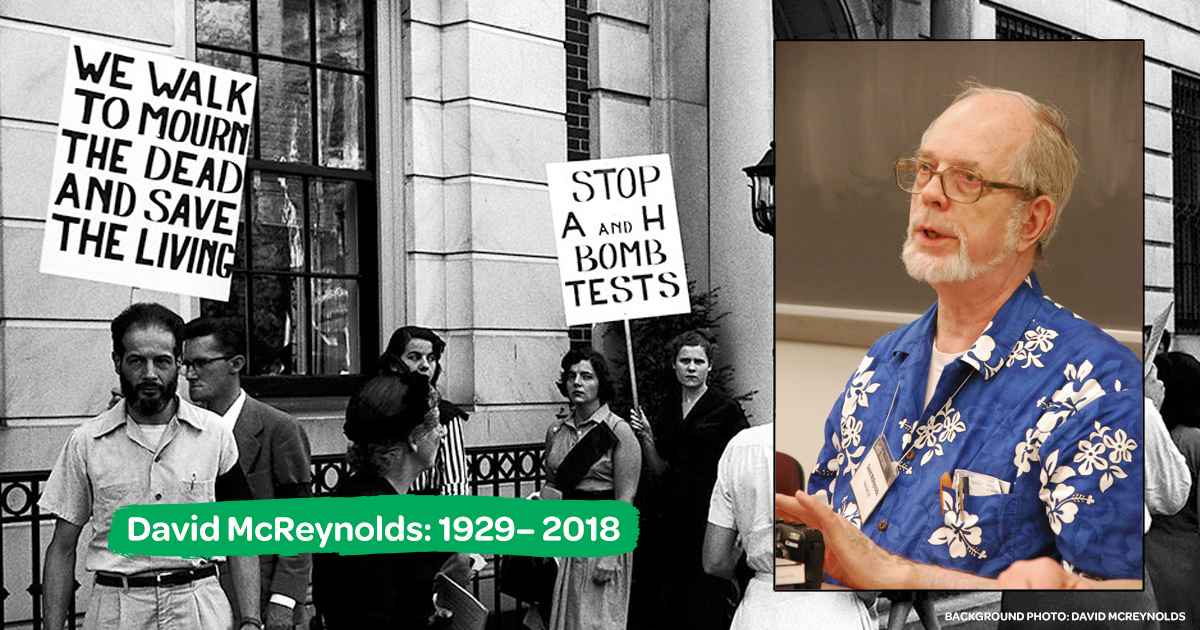 The Green Party of New York State today mourned the passing of David McReynolds at the age of 88, long-time anti-war activist, editor of the journal Liberation, Socialist Party USA presidential candidate in 1980 and 2000, and former Green candidate for US Senate in 2004. He was a longtime member of the War Resisters League, and helped organize one of the earliest draft-card burning protests against the Vietnam War. Party officials said McReynolds was an inspiring and dedicated advocate for peace and socialism, and that he would be greatly missed.

“I was deeply saddened to hear about David’s death. Long an admirer of David’s work, I was privileged to coordinate his U.S. Senate campaign for the Green Party in 2004. His unwavering commitment to peace and social justice was a foundation of the anti-war movement and an inspiration to us all. I remember fondly not only the rich political conversations and sometimes disagreements but also the wonderful stories of his time in the movement and of course sharing photos and the antics of our cats over the years. He was a mentor, comrade and friend. His gentleness, intellect, humor and dedication to peace will be missed by us all,” stated Gloria Mattera, party co-chair.

David McReynolds passed away last night. David was the long time leader of the War Resisters League. He ran twice for US President on the Socialist Party line.

I helped managed his Green Party campaign for US Senate in 2004 against Schumer. He had me read a bio of Ho Chi Minh of whom he was a big admirer. During the campaign, he held the first news conference in the front of the Central Ave. Mosque in Albany protesting the arrests of two local Muslims within two hours of the FBI announcing their arrest for financing terrorism; unfortunately, we just observed the 14th year of their imprisonment on trumped up charges, even though the jury found them innocent of the most serious chargeds.

Unlike many of the candidates I helped drive around the state, he was the easiest to feed since he loved fast food hamburgers and fried chicken. I interviewed David many times on my radio shows over the years. When I asked how can people possibly continue to support the invasion of Iraq, he said the people who support Bush are not concerned about facts, for them it is a matter of faith and facts are irrelevant. I first met David in 1984 when I was helping to manage the Presidential campaign of feminist Sonia Johnson on the Citizens Party line and we met with David to discuss a possible VP run.

On the Death of David McReynolds

I will greatly miss David McReynolds, who died this morning. David was a longtime leader of the movements for peace and a socialist internationalism that opposes imperialism and authoritarianism East, West, or South. He was arrested in demonstrations opposing nuclear missiles in both the U.S. and Moscow.

I first met David in 1973 when I arranged for him to speak at Dartmouth College about ending the wars in Vietnam and all of Indochina and building an independent party of the left. David had just led the founding of the Socialist Party USA out of the ashes of the old Socialist Party of America associated with Eugene Debs, Norman Thomas, and A. Philip Randolph.

I immediately joined SPUSA while remaining a member of the People's Party that had run America's baby doctor, Ben Spock, and DC Statehood Party founder Julius Hobson for president and vice-president the year before. I got a hold of David through the People's Party speakers bureau for which David was a featured speaker. Third-party leftists were talking about merging the People's Party, SPUSA, and the post-SDS New American Movement.

Over the next 45 years, we were often at the same demonstrations together against aggressive U.S. wars, sometimes on the same panel about independent political action, and, in 2004, on the same Green Party ticket in New York State, David for U.S. Senate and me for U.S. Congress from the Syracuse area.

David was engaged to his last days, sending out environmental and anti-war news to his contacts. David's was a long life – 1929-2018 – well lived.