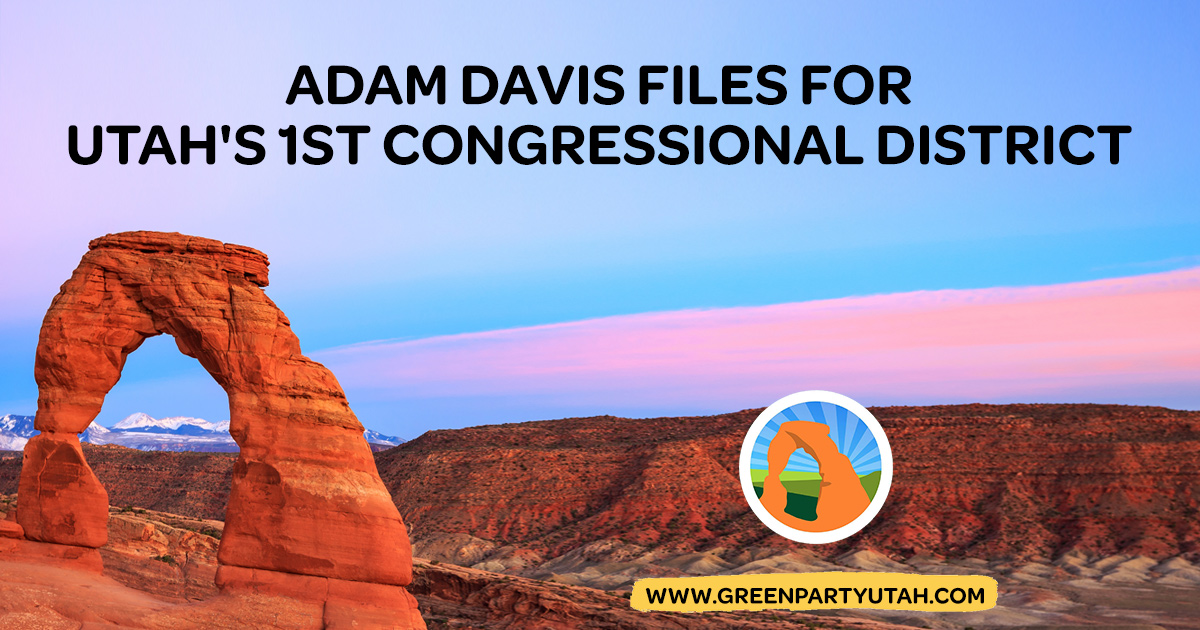 Adam Davis, originally from Ogden, will be filing his candidacy with the Green Party in Utah’s 1st Congressional District seeking to unseat incumbent Rob Bishop. Davis is campaigning on a platform of inclusive government that works for average Americans and ending the stranglehold of corporate lobbyists over our Congress. “Our Congress today is beholden to the interests of corporations and ignoring the needs of their constituents. Changing that should be a top priority of voters of all persuasions.”, says Davis.

Davis was born in what is now Ogden Regional Medical Center to a public school teacher mother and grew up in Ogden. He would go on to graduate from Ben Lomond High School in 2002, and from Stevens-Henager College in West Haven in 2014. He married his wife Kamie in 2007, and they now have 2 children, and currently live in South Jordan, moving to the Salt Lake area for work after graduating from college. This background has given him insights into how our public school system and its teachers are being massively shortchanged, the value of unions while seeing his mother serve as President of the Ogden Education Association, and what it really means to someone’s life to be working some of the lowest wage jobs in our economy.

On why he chose to run, Davis replied, “I’m running to give voice to the working class people in this district who are being crushed by expanding corporate power. We often hear people talk about the burdens that high tax rates or excessive regulations cause people, but the burdens caused by corporations not being reigned in are just as real and just as damaging.”

This is Adam’s first campaign for office after becoming involved with the Green Party following the 2016 elections, and says “I’m excited to give people a better option this year. Democrats and Republicans aren’t getting the job done. We need better answers from people who are actually tuned in to what our lives are like.”

Davis will be doing a Facebook live video this afternoon with fellow Green Party Candidate Abrian Velarde, who will be running in State Senate District 12.