The debate through the Green Party lens 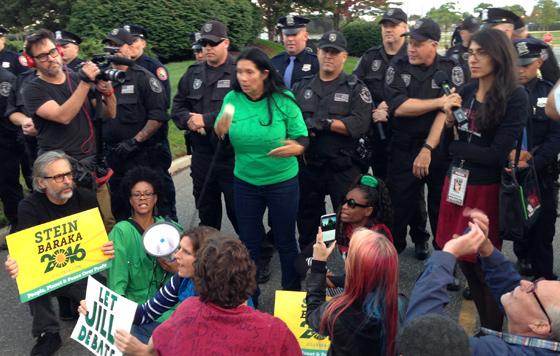 Despite the efforts to silence the competition for the two establishment parties by excluding us from the televised presidential debates, we were able to reach millions of voters with our message using the open Internet and a cutting edge social media campaign.

The debates sponsored by the Commission on Presidential Debates (CPD), a front group created by the Democratic and Republican parties to fool the American public, are anti-democratic. The two parties should not have the power to decide that their opponents cannot debate. That is not what democracy looks like.

When the CPD was founded by former chairs of the Democratic and Republican National Committees, both made it clear their goal was to keep challengers out of the debate. Republican Frank Fahrenkopf, who remains a co-chair, indicated at the news conference that the CPD was “not likely to look with favor on including third-party candidates in the debates.”

The NY Times quoted Democrat Paul Kirk, who was more blunt: “As a party chairman, it’s my responsibility to strengthen the two-party system.” Kirk’s successor as co-chair is Michael McCurry, former press secretary for Bill Clinton. The arbitrary criteria set by the secretive CPD are not designed to exclude “non-viable candidates”, but rather to prevent any candidate outside the Democratic-Republican duopoly from becoming viable in the eyes of the public.

At Hofstra University for the first debate of 2016, the police were hostile to me as I attempted to exercise my First Amendment right to speak with voters about my campaign. I was invited in to do interviews with several networks, but the police prevented me from being able to talk to the media. On my way to interviews with MSNBC and ABC, they detained me and removed me from the campus. Police interference made it impossible for me to fulfill my scheduled media appearances. Since when is the police charged with keeping opposition candidates off the air on debate day?

More than 1,000 police at Hofstra created a labyrinth of road closures, checkpoints and blockades, making it very difficult for people to drive, for buses to drop people off, and even for people to walk. A “free speech zone” was set up several blocks from the debate area in a fenced off area where no one could see what was happening except other protesters and police who controlled the area. The “free speech zone,” basically a cage to silence peaceful protesters’ voices, is an abhorrent concept in a country where freedom of speech is a constitutional right.

The police kept people away from Hofstra with a ten-foot fence surrounding the perimeter, then three metal barricades along a four-lane highway that was closed. The police did an effective job for those who commanded them to deny people their constitutional rights of political speech and assembly.

Despite these police tactics people persevered to get their message out. Protesters supporting my inclusion in the debates held protests on both sides of Hofstra. I was able to hold a “People’s Debate” outside the media parking lot, where journalists participated by asking questions. We discussed critical issues not covered in the official debate, including solutions to the climate crisis, the tremendous debt of our younger generation from predatory student loan debt, and the need to end big banks’ domination of the U.S. economy and create living wage jobs as a human right.

We did not waste time talking about where President Obama was born.

24 people protesting the closed debate, some of those who represent the 76% of voters who want open, four-candidate debates, were arrested. What kind of democracy lets two establishment parties decide to keep their opponents off the stage and then arrests people who protest the staged debates?

Despite the draconian police-state tactics deployed to silence our voices, our campaign was undeterred. We accomplished a historic breakthrough during the debate, by using cutting edge social media tools to insert my voice live into the debate in real time. Using Facebook, Twitter and Periscope we were able to reach approximately 15 million voters — and that number is still rising as people share posts, tweets and videos with their friends and family. “Jill Stein” has been trending at #1 on Facebook, and Google searches have spiked — one of the top search phrases being “How do I vote for Jill Stein?”

No third party candidate has reached such a large audience since Ross Perot was included in the debates 24 years ago. After the debate I stayed online in a live question and answer session for 45 minutes, answering questions tweeted by voters with the hashtag #HeyJill.

In 1988, the League of Women Voters warned that the parties taking over the Commission on Presidential Debates would “perpetrate a fraud on the American voter” and refused to be “an accessory to the hoodwinking of the American public.” They foretold the truth, and now we must all work to undo the hoax. It is critical to the future of US democracy that we end the debate commission’s fraud on US voters. We won’t have real democracy until we have open debates that include all candidates on enough ballots to win.

The American people not only have a right to vote, we have the right to know who we can vote for. The Stein/Baraka campaign continues to fight for open debates and stand up for democracy, using all available means to inform and empower voters in the 2016 election.