Green Party, independent candidates for US Senate to debate tonight on facebook live 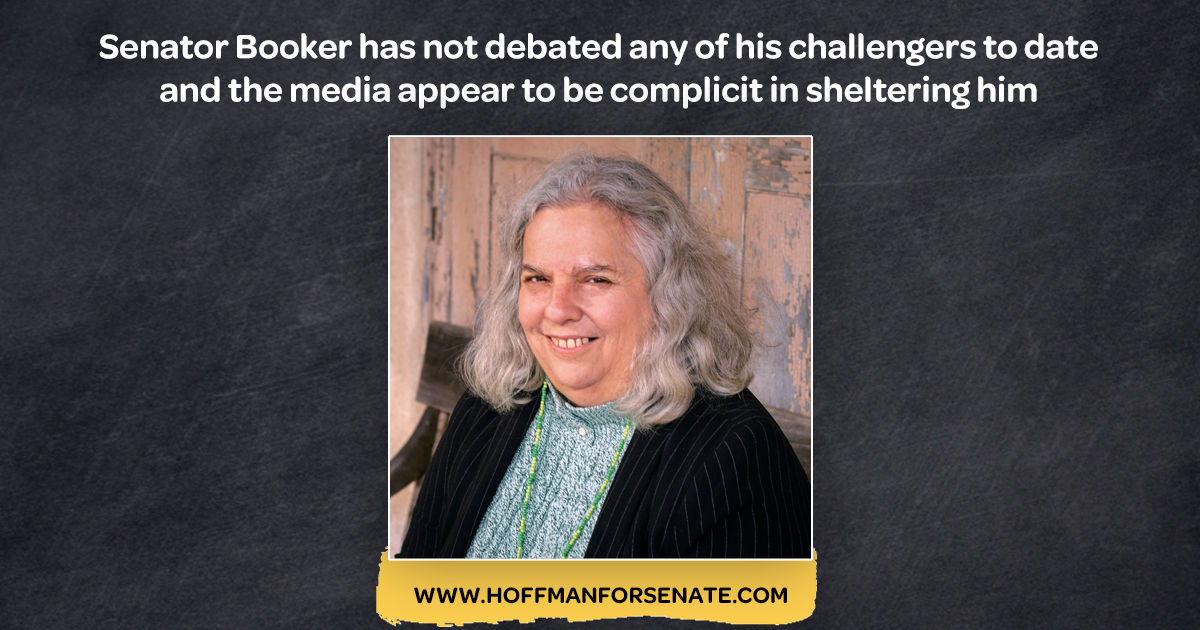 [NEW JERSEY] Three of the five US Senate candidates now listed on the November 3rd ballot in New Jersey— Madelyn Hoffman, Green Party; Veronica Fernandez, Independent and Daniel Burke, LaRouche Independent—will hold their own debate "Let NJ Decide" tonight, October 14th from 7:00 pm – 8:30 p.m. via Facebook Live from all the candidates' Facebook pages and from Create Your Future Productions Facebook page and YouTube channel (see below). The candidates will debate matters of concern to NJ residents and will call on News 12 New Jersey to hold a debate with all ballot-qualified candidates.

Veronica Fernandez remarks, "I join with my opponents, Madelyn Hoffman and Daniel Burke, in looking forward to our debate addressing important issues facing NJ residents. We are disappointed that Cory Booker and Rikin Mehta will not be participating. It is our sincere hope that News12 NJ and/or another media outlet will soon host a debate for the five ballot qualified candidates so that NJ voters can be informed of ALL their choices before making their decisions."

Madelyn Hoffman added: "Tonight, during our debate, Senator Booker will be represented by an empty chair. We invited him to attend this debate and have heard nothing at all from his campaign. He has not debated any of his challengers to date — not during the primary and not during the lead up to the general election. No candidate should be allowed to 'glide' back to re-election. What makes it worse is that the media appear to be complicit. We need a real debate with all ballot-qualified candidates NOW before Election Day, not some conversation a few months from now."

Daniel Burke commented, "In this chaotic period, Americans have two choices: we can passively accept the dominance of the bipartisan War Party, of which Cory Booker is a leading member, or we can fight for an optimistic and peaceful vision for the future. The people should fight for an open debate, so that all the candidates for US Senate can be heard."

These three candidates have gathered thousands of signatures across the state in support of their candidacies as well as in support of open debates. Will the New Jersey voter be allowed to hear their voices? During tonight's debate, the candidates will ask the public to join them in contacting News 12 NJ to call for a debate featuring all 5 candidates for U.S. Senate.

The debate format is as follows. Moderators from each campaign will read questions provided by the campaigns. The agreed-upon topics include campaign finance reform, health care, US foreign policy, the Green New Deal, space/science policy, and banking. Each candidate will have three minutes to answer each question and will make opening and closing remarks. The debate is expected to last 90 minutes.