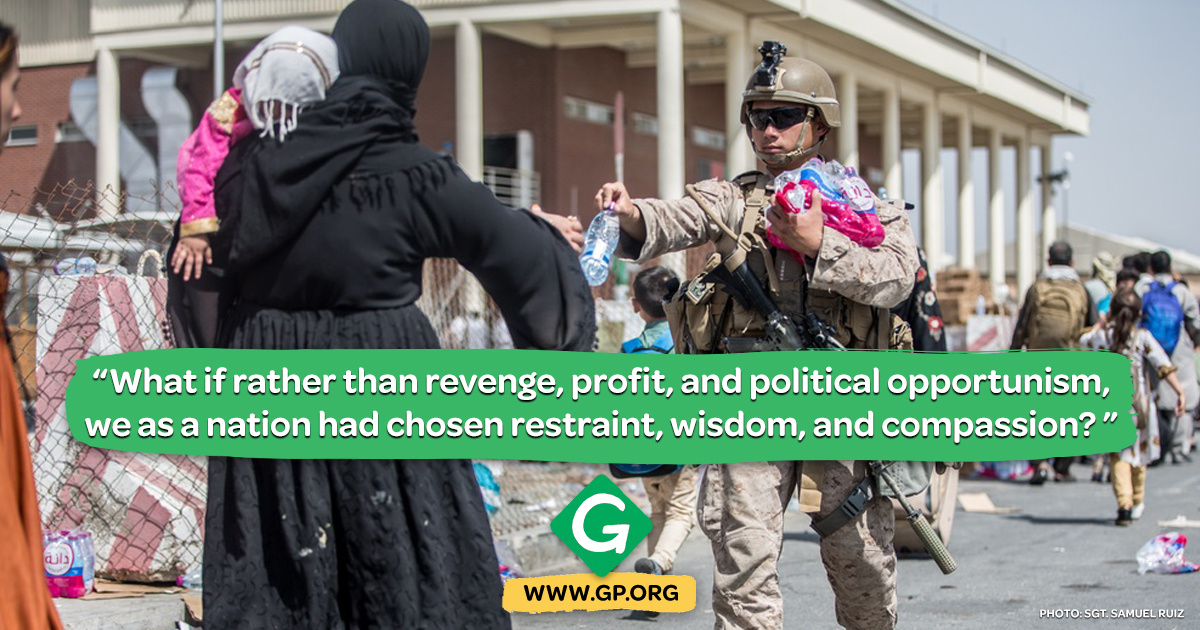 The North Carolina Green Party remembers the tragedy of 9/11/2001 and the subsequent two decades of endless wars in the following editorial by member and veteran Matthew Hoh. This has been edited from the original publication.

Many have seen a video this week of a young Marine in Kabul tenderly giving water to an Afghan child. It makes me think of what might have been these last 20 years. In contrast with that Marine's act of compassion with the institutional actions of violence, greed and self-interest that, so far, have defined the American 21st century.

What if rather than revenge, profit, and political opportunism, we as a nation had chosen restraint, wisdom, and compassion? While many Americans can honestly say the terror attacks of 9/11 took them by surprise, it is hard to argue they were without cause.

Decades of U.S. involvement in the Muslim world: bombings, deadly sanctions, occupations, coups and support for despotic regimes led to 9/11. However, American leaders chose wars instead of understanding 9/11 as the consequence of decades of militarized foreign policy. Those wars would continue the same chain of events that brought about 9/11, with further costs to the American people, and unimaginable suffering to those overseas.

We cannot declare these wars removed from the American people. More than 7,000 US service members have died in these wars. At least 8,000 contractors, in previous wars men and women in uniform, never returned. After coming home, more than 10,000 combat veterans have been killed by suicide. That is more than 25,000 dead Americans. Most of them were young, just barely beginning their lives.

The wars live in families, communities, and workplaces. Perhaps more than 500,000 combat veterans suffer from traumatic brain injury (TBI). A majority of these TBIs resulted from surviving explosive blasts that would have killed these young men and women in any previous war. Along with the TBIs, hundreds of thousands of war veterans, and their families, live with mental and emotional disabilities such as PTSD, substance abuse, moral injury, and other "invisible wounds."

These wars manifest at home in other ways. It can be no coincidence the rise of Afghan opium production, from a level of near-zero exports in 2001 to over 80% of the world's supply, coincided with an opioid epidemic that has devastated hundreds of thousands of American families.

Federal budgets for necessary services to the American people have remained flat or declined over the last two decades, even as our country grew by almost 50 million people. War budgets have increased obscenely: the U.S. now spends $1.25 trillion a year on war. This has resulted in federal agencies growing in budgets, power, and size, while attendant corporations have seen mass profits and exorbitant growth.

There has been no victory or safety found in these wars. Al Qaeda went from an organization smaller than 400 people to one with tens of thousands of worldwide members and control of entire regions and cities. How can anyone say these decades of war have been a success with all their costs and consequences? I can only understand those who do say such a thing as to be either dumb or in on it.

We are at a juncture, not only with the wars but also with the climate crisis, pandemic, economic inequality and racial justice. We can choose to follow the violence, the profiteering, and the outcomes they have brought, or we can choose to be like that young Marine at Kabul airport.

Matthew Hoh, a member of the North Carolina Green Party, is a senior fellow with the Center for International Policy. He is a 100% disabled Marine combat veteran who resigned his position with the State Department in Afghanistan in 2009 in protest of the escalation of the war. He lives in Wake Forest.