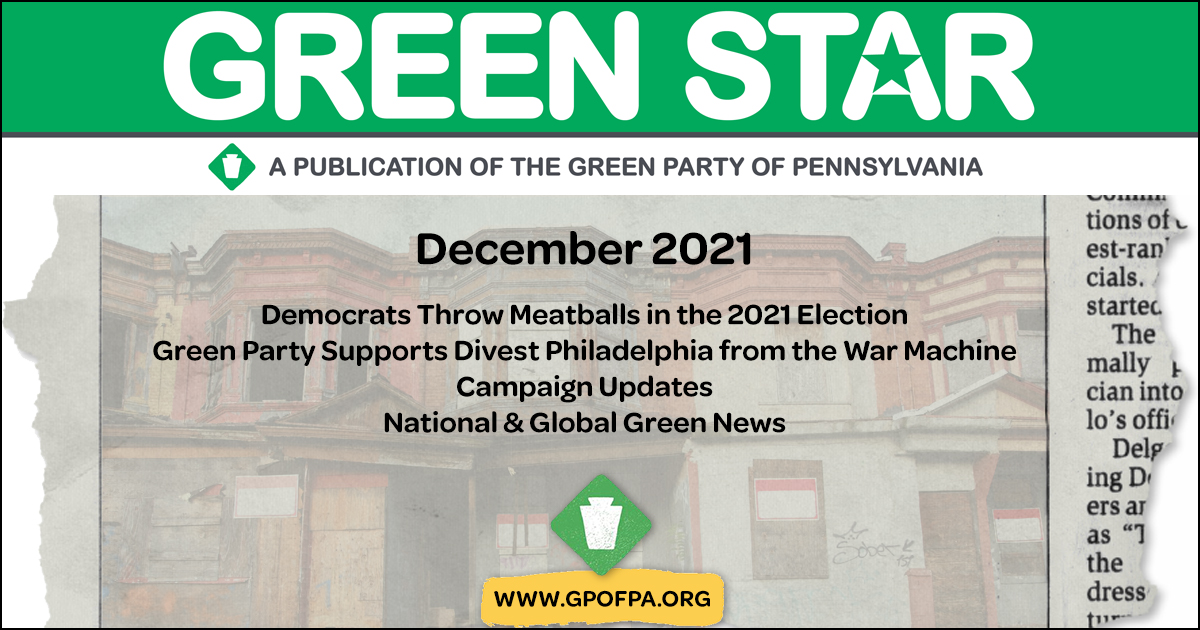 Democrats Throw Meatballs in the 2021 Election

The results of the 2021 elections aren’t looking great for progress in the next season. The spreadsheet from this year’s results shows many easy misses and many hard-ball truths. The Democratic Party continues to spread itself too thin while boasting that their big tent can represent both Centrists and Leftists.

Certainly from the bullpen, the Blue Sox appear to appeal to a large number of spectators. From the national league, you have rookie Alexandria Ocasio-Cortez in left field striking out with Democratic Socialists by putting Medicare for All back into the batting cage. While they also have seasoned-player Kyrsten Sinema playing short-stop on raising the minimum wage. These broad swaths of ideology should give them a hometown advantage, but when a conservative batter charges the mound, there simply is no solidarity, no nine-on-one fight.

This is where the four pillars of the Green Party give our pitchers better guidance. Green Party elected officials from school boards to mayors have fundamental shared beliefs in Peace, Ecological Wisdom, Social Justice, and Democracy, https://www.gp.org/the_four_pillars.

The penalty for the Blue Sox’s MVP Joe Biden's trajectory towards right field was especially shocking to many since his election. Even when the pitch towards progress appears right down the pike, he surprises us with new levels of disappointment. This renowned switch-pitcher cares more for those sitting in their box seats as high-paying patrons, rather than most of us sitting in the nosebleed seats trying to catch a fly-ball, just once. . . .

In PA, the Blue Sox aren’t even playing ball. While their opponents are filling up the bases, Democrats are busy at the concession stand, selling merchandise for whatever clever social buzzwords and hashtags they can put on a team jersey. Which is not to say that supporting social causes via merchandise is bad, but when that money is being funneled and held by the team owners, that’s a problem. By the way, the Green Party does also have merchandise, but the money you spend on our cool items goes right back into building a league of our own. Check it out here, https://www.gpofpa.org/merchandise.

The Green Party is now recruiting candidates to run for election during 2022. If you are a registered Green Party member who lives in Pennsylvania, please let us know if you are interested,  [email protected].

Elected delegates to the Green Party of Pennsylvania met virtually on November 14. Including visitors, there were 20 people present from eight counties. They passed a resolution calling for a ban on new fossil fuel pipelines and another resolution supporting the Shut Down Berks Coalition. The GPPA Communication Team offered three reasons why members should write news releases, and the GPPA Finance Team asked members to fill out a 2022 budget survey. Nominations for the GPPA Steering Committee may be offered on https://www.gpofpa.org/

The Green Party of Philadelphia City Committee (GPOP, www.gpop.org) continued its support for Divest Philly from the War Machine by calling on people to join a campaign to divest the Philadelphia Board of Pensions from the nuclear weapon industry. Divest Philly is a coalition of 27 local organizations which desire a cut in the Pentagon budget and greater investment in public services. At the present time, the managers of Philadelphia’s pensions have more than $11 billion invested in the nuclear weapon industry. Divest Philly would like the pension board to screen Philadelphia’s funds to eliminate all investments in the nuclear weapon industry. . . . Volunteers who wish to join Divest Philly from the War Machine may register right here, https://docs.google.com/forms/d/15cAI8Y48IxLjragHw7N5egsOywiiAhJDy5IoJx5oC9A/. Community organizations which would like to endorse this Divest campaign may sign up right here, https://docs.google.com/forms/d/e/1FAIpQLScGq6N4-1BUJv_tfmw5xiySlKvYQgpRwXM8TXaKNcdjxlyeHw/viewform. (show all)

Congratulations To Our 2021 Green Party Candidates!

The GPPA ran 14 candidates for office in 2021. The Communication Team congratulates all of our candidates. At press time, the complete results were not available, but the GPUS had some early (uncertified) results:

Last month, world leaders flew into Glasgow, Scotland on individual jumbo jets for yet another publicity stunt to save our planet. The entire event failed to produce the radical action scientists say is needed to avoid climate collapse, and the only way for humanity to prevent catastrophe for life on Earth is a global Green New Deal.

With over 25 years of COP gatherings failing to produce real climate solutions, the Green Party said direct action by climate organizers is needed to halt fossil fuel use. Media coverage called Glasgow the “Last Chance COP,” referring to the scant years left to prevent global heating from exceeding 1.5 C (2.7 F). The most optimistic reading of the Glasgow pledges has the world on track for 2.4 C (4.3 F) of heating (though prior pledges have almost never been fulfilled). The climate crisis is already happening and getting worse, as extreme weather events become more frequent with massive hurricanes, flooding, drought, wildfires, and heatwaves.

“Solving the climate crisis requires wholescale system change: A Green New Deal that combines a rapid transition to zero greenhouse gas emissions and 100% clean renewable energy with investments in social programs such as health care, living wage jobs, education and housing. We need to create a different world where the focus is on meeting the common needs,” said Mark Dunlea, co-chair of the Green Party’s EcoAction Committee. (show all)

After the November 2021 elections, like previous local elections, it is becoming increasingly clear that the Green Party of the U.S. has developed into a strong contender on the political playing field. In November, Greens claimed over 17 victories across the U.S. In Maine, Green Independent Party candidates Anna Trevorrow and Scott Harriman won city council races in both Portland and Lewiston (the state’s first and second most populous cities, respectively). Furthermore, in Minneapolis, MN, Green candidate Samantha Pree-Stinson became the first Black Woman to be elected to the city’s Board of Estimation & Taxation . . . .

November victories in races that have been called, so far, include: (show all)

Germany’s 2021 federal election has ended with the German Green Party securing 14.8% of the national vote and 16 seats in parliament. This is considered a historical win for the German Greens. Now the party, led by Annalena Baerbock, is entering negotiation talks to form a government. . . . As of now, the ‘Traffic Light Coalition’ (SPD, FDP, Green Party) is in favour of becoming the next German government. Preliminary talks have marked some agreement on social and environmental issues, with a slight push back on some matters. The Green’s conditions for phasing out coal by 2038 and a minimum wage increase to €12 were agreed upon by all parties. However, their demand for a speed limit on German motorways was not supported. . . .(show all)

The Green Party of the U.S. is condemning the Canadian government’s attempt to invoke a 1977 treaty in the escalating legal disputes surrounding the closure of Enbridge’s Line 5 pipeline. Line 5 moves crude oil from Superior, Wisconsin, to Sarnia, Ontario, passing through the Straits of Mackinac along the way. This six kilometre stretch of the pipeline is at risk of leaking into the Great Lakes, with potentially severe consequences for the environment. Amid concerns of a leak, Michigan Gov. Gretchen Whitmer ordered the pipeline shut down in November of 2020, but pipeline company Enbridge refused. They are now embroiled in a legal battle. . . .

Mark Dunlea, co-chair of the ‘EcoAction Committee of the U.S.’ and Green Party spokesperson . . . said he strongly opposed what he called a “desperate effort” by the Canadian government to use the 1977 Treaty. He said that the American Green Party has “long advocated for the halt (sic) of all fossil fuel infrastructure and the rapid phaseout of all uses.” Concerns regarding the pipeline included “catastrophic oil pipeline rupture” and the “existential crisis” of climate change. (show all)

In the DRC [Democratic Republic of Congo], an interministerial decree authorizes the slaughter or sale of certain species protected against a tax. Environmentalists are mobilized and denouncing this decision. . . . “Today, the ICCN cannot arrest a person for illegal possession of ivory or okapi skins, there is no more illegal trafficking of protected species” in the DRC, lamented Cosma Wilungula [Director General of the Congolese Institute for the Conservation of Nature (ICCN)]. “The 32 million U.S. dollars spent each year on conservation has no reason to be released by donors to be used for the protection of protected areas and endangered species,” he added.

According to this decree, it is now legally authorized to capture, kill or hunt animal species, totally or partially protected, thanks to a permit obtained from the Directorate of Nature Conservation. It is therefore now possible to kill a forest elephant, as long as you pay $ 2,885 to the state or detain it for $1,860. Likewise, capturing a mountain gorilla will cost $ 1,545. . . .(show all)

Korea’s Green Party has condemned a joint summit in Budapest between South Korea and Hungary on November 3. The Green Party of Korea is angry over a decision made during the summit in which the two countries expressed a commitment to achieving carbon neutrality by 2050, BUT with the help of nuclear power. Hungary’s President, Janos Ader said: “The common intention of both countries is that carbon neutrality is impossible without the use of nuclear energy.”

Korea’s Greens stated that president Moon Jae-in’s declaration of ‘carbon neutrality’ in 2050 is not realistic. . . . Korea Greens say the administration of Moon Jae-in wants to increase nuclear power reactors in the name of decarbonization. (show all)