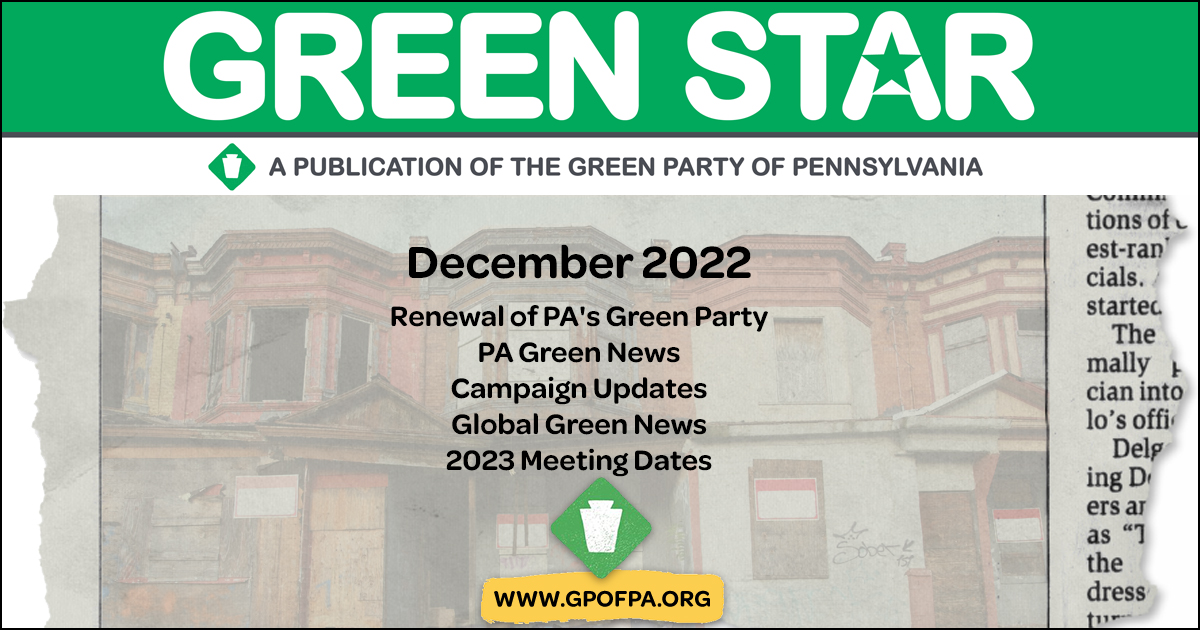 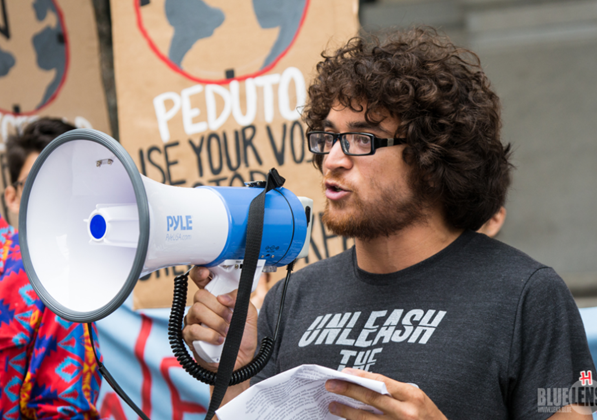 I was impressed by the way elected delegates to the Green Party of Pennsylvania (GPPA) came together on November 13 to accept by consensus a plan to rebuild their party during the coming year. Thirty delegates and friends from 12 PA counties discussed a plan which was drafted by GPPA Co-chair Jay Ting Walker from Allegheny County.

Walker’s plan was called “2023 GPPA Goals,” but it was much more than that. It also included targets for expanding the Green Party’s influence and helping the Green Party impact local and county elections during the coming year.

I asked Walker what motivated him, and he said, “Our 2022 campaigns demonstrated that our state and county parties needed to be strengthened. In 2023 the GPPA is setting out to deepen our organizing around the state by focusing on supporting the continued development of our county parties, by developing our fundraising abilities, and by building on our already strong communications.”

“To accomplish this,” Walker continued, “the State Committee is finalizing 2023 GPPA Goals to make sure that we have benchmarks to hit in continuing to develop our statewide organization. GPPA will also be supporting municipal [and county] candidates around the Commonwealth. The Green Party already has a strong message that prioritizes the environment and working people. By strengthening our organization, we'll be able to deliver our winning message to more people throughout the Commonwealth.”

The main plank in this program will be development of ten well-functioning Green Parties at the county level. At the present time, GPPA has active locals in Allegheny, Berks, Centre, Lackawanna, Lancaster, Montgomery and Wayne Counties and Philadelphia. Over the last few years, previously active Green Parties in Adams, Bucks, Chester and Erie Counties have been allowed to atrophy. 2023 GPPA Goals says, “County parties are our cornerstone. They support our petitioning efforts, our candidates, and our local actions. We need to make sure it's easy to run one and that there's lots of guidance.”

Following the meeting, I asked some of the delegates to the GPPA State Committee what they thought of the 2023 GPPA Goals, and their response was genuinely positive.

[Drafted by GPPA Co-chair Jay Walker for the GPPA State Meeting on 11/13/22. It was discussed and passed by the delegates. It still needs a GPPA GROWTH COMMITTEE to follow through with implementation.]

County parties are our cornerstone. They support our petitioning efforts, our candidates, and our local actions. We need to make sure it's easy to run one and that there's lots of guidance. I want everyone to ask themselves, “Is this thing I'm doing for the party helping to build my county chapter?”

County Party Goals each with at least

Here are the General Election Returns for all GPPA candidates who were on the November 8 ballot:

During 2022, the Green Party had 156 candidates for election in 26 States. There were 32 victories. For more information, please visit the GPUS Elections Database.
https://www.gpelections.org/

COP27 in Egypt Ended Without New Reduction of Greenhouse Gasses

After more than two weeks, the major UN climate conference, which opened on November 6 in Sharm el-Sheikh, Egypt, finally gave birth to a highly contested text on aid to developing countries affected by climate change, but without new ambitions for the reduction of greenhouse gasses. COP27 ended more than a day behind schedule, making it one of the longest COPs in history.

The text, adopted after long discussions which continued until the end of the night, provides for the creation of a fund to finance the climate damage already suffered by “particularly vulnerable” countries, a decision considered very important by its promoters. A fund that developing countries have been asking for years to compensate for the “ losses and damages ” they suffer when they are very little responsible for global warming... read more

Indonesia Obtains $20 Billion to Reduce Its Dependence on Coal

Twenty billion dollars is what Indonesia, the fourth most populous country in the world, should receive from a group of rich countries and international institutions to reduce its dependence on coal. The announcement was made by the White House on the sidelines of the G20 summit of major economies on the Indonesian island of Bali. . . . The participating countries are the U.S., France, Canada, and the United Kingdom. This “partnership for a just energy transition follows another $98 billion plan benefiting South Africa, Africa’s leading industrial power.”

The funding obtained over three to five years is shared equally between public and private, in the form of aid, loan guarantees, or private investment. The principle of this mechanism was launched at a ceremony in Bali. As part of this partnership, Indonesia has also pledged to achieve a level of 34% renewable energy by 2030, double what the country has been aiming for so far... read more

Can Lula’s Return to Presidency of Brazil Save the Amazon?

Upon his re-election as head of Brazil on Sunday, October 30, Lula placed the environmental issue at the center of the debate. He promised to preserve the green lung of the world again. The former left-wing head of state will have to catch up with the undermining work of his predecessor, who propelled deforestation to dizzying levels under his mandate. . . .
Lula intends to end his predecessor’s “policy of devastation.” According to him, Brazil is “ready to once again play a leading role in the fight against climate change. Brazil and the planet need a living Amazon.”

A statement that seems to convince many heads of state or foreign ministers. By playing the card of protecting the Amazon, Lula seizes an ecological symbol that worries the Western world. Thus, as soon as Lula won, Norway, the primary funder of the protection of the Amazon rainforest, announced that it was restoring its envelope of 487 million euros that it had frozen since Jair Bolsonaro came to power in January 2019... read more

Private jet traffic was disrupted November 5 at Schiphol Airport in Amsterdam. Several hundred Greenpeace and Extinction Rebellion activists stormed the tarmac of an area of ​​the airport dedicated to private jets, sitting near the planes’ wheels to prevent them from taking off.
For its part, airport management said in response to the protest that it had set itself the goal of zero emissions by 2030 and supported the aviation sector’s ambitions to achieve carbon neutrality by 2050. Schiphol airport had already been the subject of similar action at the end of 2020 when climate activists blocked access... read more

All State Web Conferences will begin promptly at noon.

Saturday and Sunday, June 10 and 11, location to be announced

Saturday and Sunday, September 9 and 10, location to be announced