July 4: Green Party Says it is Time to Declare Independence from Fossil Fuels 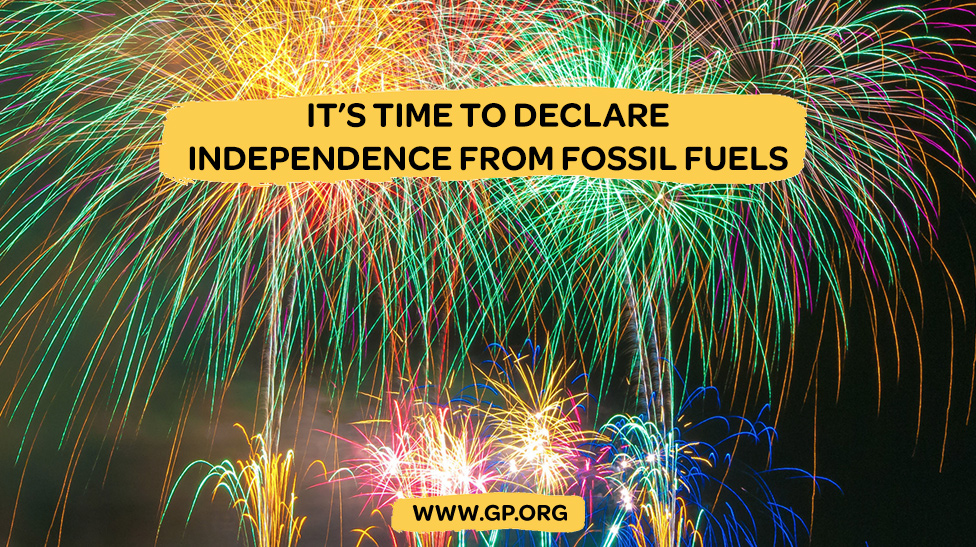 As New York suffers through a prolonged heat wave this July 4, the Green Party candidates for Governor and State Comptroller reminded New Yorkers of the need to declare independence from fossil fuel companies.

The Greens said that New York should become the second state after Rhode Island to file suit against the oil and gas companies for the damage they are causing by driving global warming. New York City has already filed suit. They added that New York should become the first state to commit to halt all new fossil fuel infrastructure and commit to transitioning to 100% clean energy and net zero carbon emissions by 2030.

"The fossil fuel companies use their wealth and campaign contributions to buy our elected officials. Despite Cuomo's massive war chest, he quickly backtracked from his recent statement that he would stop taking donations from the fossil fuel industry. He says that he will stop any more fossil fuel plants moving forward but yet he continues to want to spend $88 million of our tax dollars to build two new gas turbines to burn fracked gas to power the state capitol, subjecting low-income neighbors to decades more of pollution," noted Howie Hawkins, the Green Party candidate for Governor.

"Cuomo should immediately pull the permits for the Competitive Power Ventures fracked-gas power plant in Orange County because it will add 10% to the state's carbon footprint. The fact that the permitting was greased through with bribes from CPV to top Cuomo aide Joe Percoco gives Cuomo another good reason to do the right thing, right now," Hawkins continued.

Hawkins has been calling for a Green New Deal since 2010, providing a path to full employment through investments in renewable energy, public housing, schools, and mass transit. He wants public ownership and democratic control of the energy industry to lower costs and ensure that it is operated for the common good.

"We need New York to be a climate leader and become the first state to divest its pension funds from fossil fuels, joining NYC, which announced its support for divestment earlier this year. It is morally wrong for the state to seek to profit by investing six billion dollars in fossil fuels companies that our destroying our planet. It is also an increasingly risky financial decision for the state comptroller to put our pension dollars in oil, coal and gas companies as the era of fossil fuels is coming to an end," said Mark Dunlea, the Green Party candidate for State Comptroller.

The Green Party supports the NY Off Fossil Fuels Act (A5105 / S5908) to move to 100% clean energy by 2030. The bill supports a Just Transition to assist vulnerable communities and impacted workers. It would set a goal to require all new vehicles to be fossil free by 2025, and would require state and local governments to adopt climate action plans.