PHILADELPHIA – On March 23, the members of the Green Party of Philadelphia (GPOP) announced their endorsement of the Black Lives Matter (BLM) movement as well as the protests that are a response to the murder of George Floyd. They encouraged people to get in the street and make their voices heard. However, they also asked participants to take precautions. Please be sure to follow all social distancing guidelines (6 feet apart, wear a mask, hand sanitize). The spread of COVID-19 is still a primary concern, though the need for social justice takes precedence. As Maya Angelou said, “The truth is, no one of us can be free until everybody is free.”

The protests since May 26 have not just been a reaction to the murder of George Floyd, yet another Black man killed at the hands of a white police officer in Minneapolis, MN. They have also been a broad critique of policing itself, as one speaker noted, “a good cop is one that evicts families from homes and conducts homeless sweeps,” referring to regular actions of law enforcement that penalize people for poverty.

Speakers also called for, as the Green Party platform calls for, massive new investments in education, social services and healthcare. 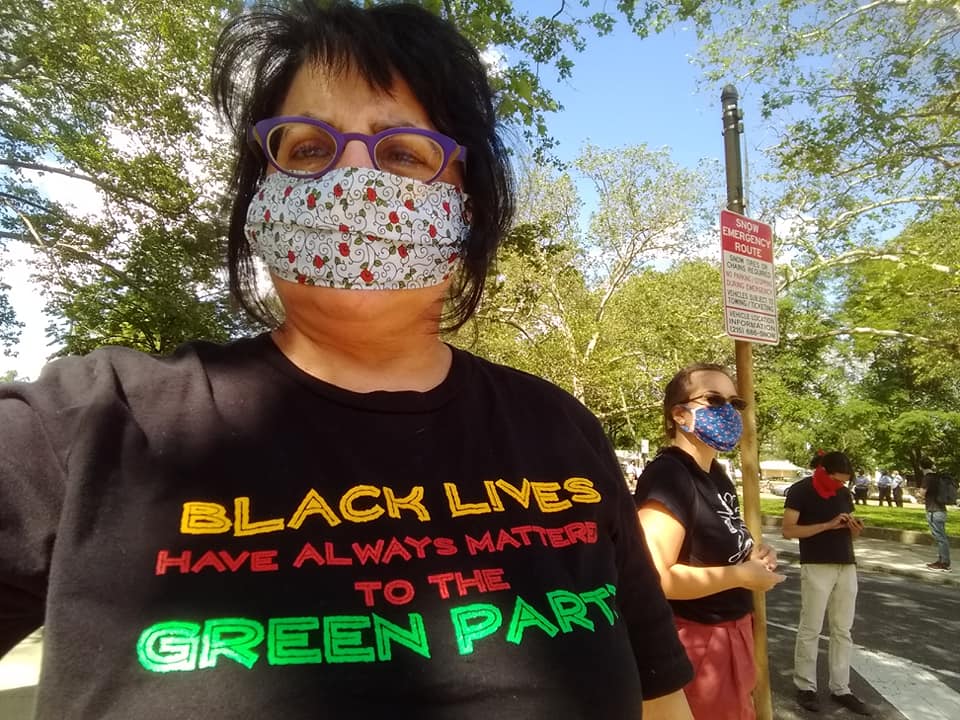 While Democrats paid them lip service and wouldn’t even say “BLM” out loud, the Republicans sought to have BLM labeled a terrorist organization. Meanwhile, the Green Party was taking BLM leaders seriously and adding their demands to our Eco-socialist platform. “As Greens we have stood behind the Black Lives Matter movement from the very beginning,” noted GPOP Chair Belinda Davis (Chestnut Hill). “The Green Party has called for reparations for slavery since we began,” she noted.

“Mayor Kenney needs to keep going and not just walk back this year’s budget increase for the Philadelphia Police Department (PPD) but all of it,” said Asantewaa Nkrume-Ture (Garden Court), a Green Party member, referring to a proposed $14 million increase to the PPD budget that Kenney recently pulled.

Justin Bell (Port Richmond), a member of the GPOP City Committee, noted that police brutality is not specific to Minneapolis. He said, “Between 2007 and 2013, 81% of people shot by police officers in Philadelphia were African American. That’s a staggering number given that the city as a whole is a little over 40% African American. This is why we in Philadelphia are also calling to defund the police.” In solidarity, the Green Party stands against the brutal and racist justice system policies that destroy the fabric of communities.

What does the Green Party expect to accomplish? Since the murder of George Floyd there have been a lot of new hashtags that deal with either defunding, reforming or abolishing police departments around the U.S. The GPOP does not endorse any one plan or strategy, however their end goal is to abolish the need for police in their current form and to allocate those funds to social programs. This is especially true in the realm of metal health and drug rehabilitation. Two tasks the police have never been equipped to handle. Minneapolis, a city with an elected Green Party City Councilmember, Cam Gordon, recently voted to abolish its police department and instead replace it with a new community-based public safety system. “We should look to Minneapolis as a model,” said Davis.

The Green Party will not let the movement for justice lapse, when the hashtag stops trending. In order to implement the systemic changes needed, GPOP will continue to support honest officials who are not beholden to police unions or big business. Electing Green Party candidates is one surefire way to get our initiatives passed. Greens do not accept corporate contributions and are completely grass roots funded. This allows Green candidates to stand up for what they believe in and to vote with their hearts.

You may find the Green Party of Philadelphia on Twitter and Facebook. The Green Party of Pennsylvania (GPPA) is an independent political party that stands in opposition to the two corporate parties. GPPA candidates promote public policy based on the Green Party’s four pillars: grassroots democracy, nonviolence, ecological wisdom, and social justice/equal opportunity. For further information about GPPA, please visit www.gpofpa.org or email [email protected]. Please follow GPPA on social media: Facebook and Twitter.